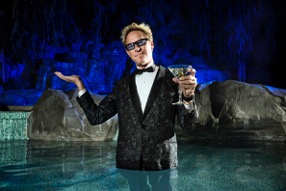 Painter, designer, and illustrator Josh Agle, also known as Shag, will lecture at the LSU School of Art at 5 p.m. on Monday, January 26, 2015, in the Design Building Auditorium, room 103.

Shag works in southern California. His distinctive artistic style draws from commercial illustration from the past five decades, but the work is imbued with an attitude and sly sense of humor which is unmistakably of our time. Solo exhibitions of Shag’s work have been held in the US, Europe, Japan, Australia, and South America. Positive reviews of Shag’s exhibitions have been published in the New York Times by esteemed critics Robert Smith and Ken Johnson. His artwork has been published in several books and has been the subject of a documentary film and a musical.

The paintings themselves celebrate consumerism and consumption on vividly colored, sharply rendered panels; the characters drink, smoke, and eat in lavish, stylish surroundings. But Shag sees the visuals of his work as window-dressing or stage scenery. He is more concerned with the themes and narratives in the paintings and the meanings a viewer might find when looking at a piece of Shag’s art.