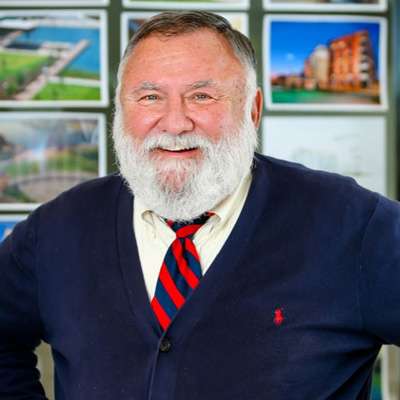 Lewis T. May is an associate principal and urban design director of Page, a multidisciplinary architecture and engineering firm with offices in the United States and abroad. May will lecture at the LSU Robert Reich School of Landscape Architecture during Design Week on Wednesday, January 28, 2015, at 5 p.m. at the LSU Design Building Auditorium.

In his lecture, “Exported Creativity: Genius loci or Cultural Imperialism?”, May will showcase his four-plus decades of international planning, urban design, and landscape architecture with studio projects in Asia, Africa, Europe, Arabia, and throughout the Americas. He will discuss both the processes and approaches developed to glean the distinct cultural and socio-environmental influences for each project and locale.

May has had a significant influence on the built environment of the Middle East by leading design teams on the planning of dozens of cities and urban centers, including new town plans for ARAMCO, communities for Internal Security Forces Housing Projects, sites for the Peace Sun, Peace Shield Master Plan Base Installation Strategies, and master plans for cities such as Accra, Ghana; Jeddah North, Saudi Arabia; and others. May is also the author of the award-winning book Landscape Architecture in Saudi Arabia.

May describes his approach to design as process-driven rather than deriving from a pre-determined theme, which frees him to be creative and leads to unique, unpredictable solutions. Page encourages that process-driven approach throughout the firm by allowing its designers the creative freedom to collaborate with colleagues and clients.

Recognized with many awards for his writing and design, May has lectured at numerous universities and professional associations. In 1993, he was recognized by the American Institute of Architects as “one of the outstanding landscape architects and planners in America.” In addition, he has been appointed to serve on two policy committees, the Texas Center for Society and Health Policy and the Center for Population Health, for the Baker Institute at Rice University.

He shares this extensive knowledge with students through teaching positions, including at the University of Houston’s Gerald D. Hines College of Architecture where he founded the Center for Ecology and served as its director. He is currently a visiting critic/adjunct faculty in the architecture programs at Texas Tech University, University of Hawaii, and Universidad de Monterrey. He earned his Bachelor and Master of Landscape Architecture from LSU.