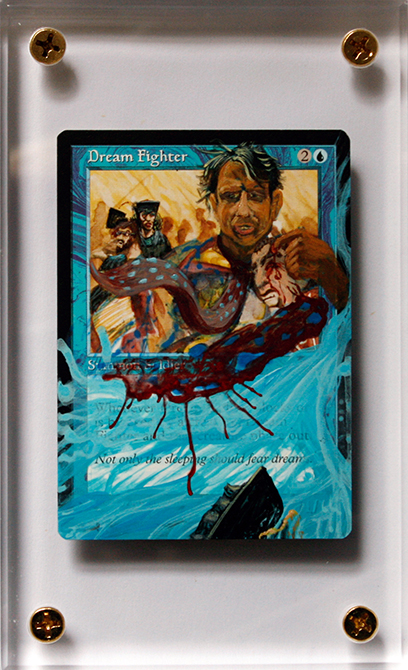 Le Caca Fraiche: New Paintings by Jonathan Mayers will be on display at the Ameen Art Gallery at Nicholls State University in Thibodaux, Louisiana, August 18 through September 12, 2014. A gallery talk with Mayers will be held on September 2 at 4 p.m.

Expanding on his previous body of work called Magic: The Unravelling, this new series of work by Jonathan Mayers attempts to create a dialogue between the consumer and the artist.

“My intention is to educate consumers on the material costs and time spent in the production of artwork. I paint on Magic: The Gathering™ cards as a way of recycling consumer products that inherently possess a small collectible value. These fantasy-based cards are played with and traded amongst enthusiasts of all ages with some of them having a dollar amount larger than $50. Most of the original cards used in this series are either common or uncommon and valued below that amount. I created unique images on these low-value cards, printed in the thousands and not necessarily useable in gameplay now, to hopefully advance their value in more than one realm.

“My personal history with Magic: The Gathering™ reaches back more than 17 years. I played the game, collected the cards, and even dreamed about how awesome it would be to make these cards my own and how I would paint them. As time passed some of the fantastical images I once dreamed of morphed into something more pertinent to our time. The images I’ve painted on these cards now touch on subjects of influential icons, social commentary, death, personal experiences, political propaganda, viral social media, environmental decisions, and biomorphic oddities, among other interests. Creating these images on such a small scale references the decline in human attention spans to real-life events over the past 20 years because of the use of texting, social media, and the internet in general, but I hope that because of the image size that one will take the time to once again pay attention to the details.”

Jonathan Mayers is an alumnus of the LSU School of Art painting & drawing program. He received his BFA in painting and drawing from LSU in 2007 and his MFA with a concentration in painting from the University of New Orleans in 2011. In 2012, Mayers became a co-manager and founding member of the TEN Gallery + Collective, located on Magazine Street in New Orleans. View a portfolio of Mayers’s previous work here or visit jonathanmayers.com.

The Ameen Art Gallery is located in Talbot Hall on the Nicholls State University campus. View a campus map here. Talbot Hall is #55.