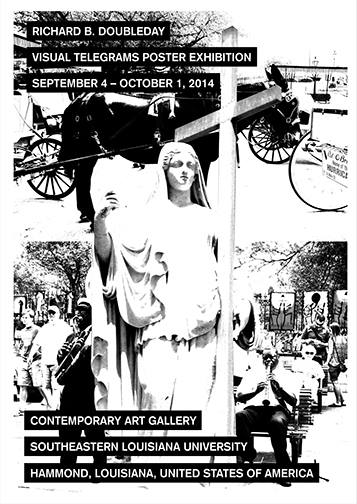 Visual Telegrams, an exhibition featuring works by Richard B. Doubleday, will be on display at the Contemporary Art Gallery at Southeastern Louisiana University in Hammond September 4 through October 1, 2014. An opening reception will be held Thursday, September 4, from 5 to 7 p.m.

Graphic designers are time travelers. Often unknowingly, they journey across time and space, gathering images, typefaces, and illustrations to form new creations that exist in the indistinct time we call the present. One could argue, as Eugene O’Neil famously said, that “there is no present or future, only the past, happening over and over again, now.” But this would negate how the most perceptive of designers seek to draw connections between their contemporary subject and the visual forms they draw on to communicate that subject in the most perspicacious manner possible. Such designers are few and far between. One such individual is Richard B. Doubleday.

Doubleday is an assistant professor at the LSU School of Art. Unlike many designers who also teach, there is no dividing line between the way he provokes and stimulates his students into solving a design problem and his own commitment to a project. As in his classes, Doubleday attempts to approach each work of design as a spontaneous creation of form and colour. His method is eclectic, with no singular style dominating his design output. However, this flexibility is not a weakness. Rather, by avoiding a prescriptively dogmatic and narrow approach, Doubleday can be fleet-footed in his response to a visual challenge. Yet, saying this, a discernible pattern does emerge when viewing his posters in their totality. Many of his works are international in reach, with a strong focus on the Middle East, South America, and Asia. In each of these works, Doubleday appears to start with a physical object that acts as a broad signifier for a region, city, or individual. These include recognizable national buildings or landmarks (churches, squares), statues (Buddha, Japanese Lucky Cat), or artistic objects (paintings, photographs, or illustrations). From this baseline of imagery, layers of colour, text, and illustrations are carefully positioned to achieve the most arresting formal arrangement. Beyond these works, another strand of Doubleday’s oeuvre is works that are simply composed of type, form, and colour. In these examples, the function of the poster is reduced to what A. M. Cassandre famously referred to as a “visual telegram.” That is, the purpose being to communicate a simple message effectively and quickly. In this instance, Doubleday’s work becomes part of a long lineage of designers in which this approach, that of condensing everything down to its essential elements, was seen as the natural end point of all graphic design. Yet, it is clear, as already noted, that on this occasion, this technique is just another string to bow.

Our visual landscape is ever changing. Whether it is the screen that sits on our desk, in our lounge, or that we hold in our hand or the constant state of flux we experience as we travel from place to place, works of design that effortlessly make us look at the world anew, that make us pause for a moment, are rarities. Richard B. Doubleday’s posters are such works. They make us experience anew the familiar and everyday. In a world where graphic design is too often ensnared by the glare of consumerism, the space these posters afford is one to be treasured and respected.