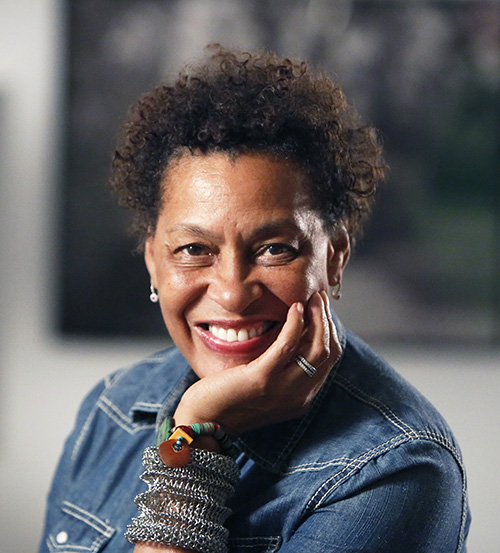 Influential contemporary American artist Carrie Mae Weems has been named the 2017-18 Nadine Carter Russell Chair for the LSU College of Art + Design. The four disciplines in the college share the rotating residency; this year’s residency is with the School of Art.

Carrie Mae Weems has investigated family relationships, cultural identity, sexism, class, political systems, and the consequences of power. Determined as ever to enter the picture—both literally and metaphorically—Weems has sustained an on-going dialogue within contemporary discourse for over thirty years. During this time, Weems has developed a complex body of art employing photographs, text, fabric, audio, digital images, installation, and video.

In a New York Times review of her retrospective, Holland Cotter wrote, “Ms. Weems is what she has always been, a superb image maker and a moral force, focused and irrepressible.”

Weems has participated in numerous solo and group exhibitions at major national and international museums including the Metropolitan Museum of Art, Solomon Guggenheim Museum in New York, and the Centro Andaluz de Arte Contemporáneo in Seville, Spain.

Her numerous awards include the prestigious Prix de Roma, The National Endowment of the Arts, The Alpert, The Anonymous was a Woman, and The Tiffany Awards. In 2012, Weems was presented with one of the first US Department of State’s Medals of Arts in recognition for her commitment to the State Department’s Art in Embassies program.

In 2013 Weems received the MacArthur “Genius” grant as well as the Congressional Black Caucus Foundation’s Lifetime Achievement Award. She has also received the BET Honors Visual Artist award, the Lucie Award for Fine Art photography, was one of four artists honored at the Guggenheim’s 2014 International Gala, a recipient of the ICP Spotlights Award from the International Center of Photography, and The WEB Dubois Award from Harvard University.

She is represented in public and private collections around the world, including the Metropolitan Museum of Art, NY; The Museum of Fine Arts, Houston; the Museum of Modern Art, NY; Museum of Contemporary Art, Los Angeles; and The Tate Modern, London.

The LSU Museum of Art’s annual collaborative exhibition with the LSU School of Art will feature Weems’ work this year. The gallery will feature two recent series of her photographic and video works, All the Boys and The Usual Suspects on display April 12-October 14, 2018. Weems will give a gallery talk at the exhibition opening April 12. Selected works from Weems’ From Here I Saw What Happened and I Cried, Louisiana Project, and Slave Coast series will appear in the museum’s permanent collection exhibition Art in Louisiana.

As this year’s Nadine Carter Russell Chair, Weems will work with art students throughout the spring 2018 semester. She will also present a public lecture at 5 p.m. on April 11, 2018, in the LSU Design Building Auditorium, also supported by the Reilly Visiting Artist Fund.