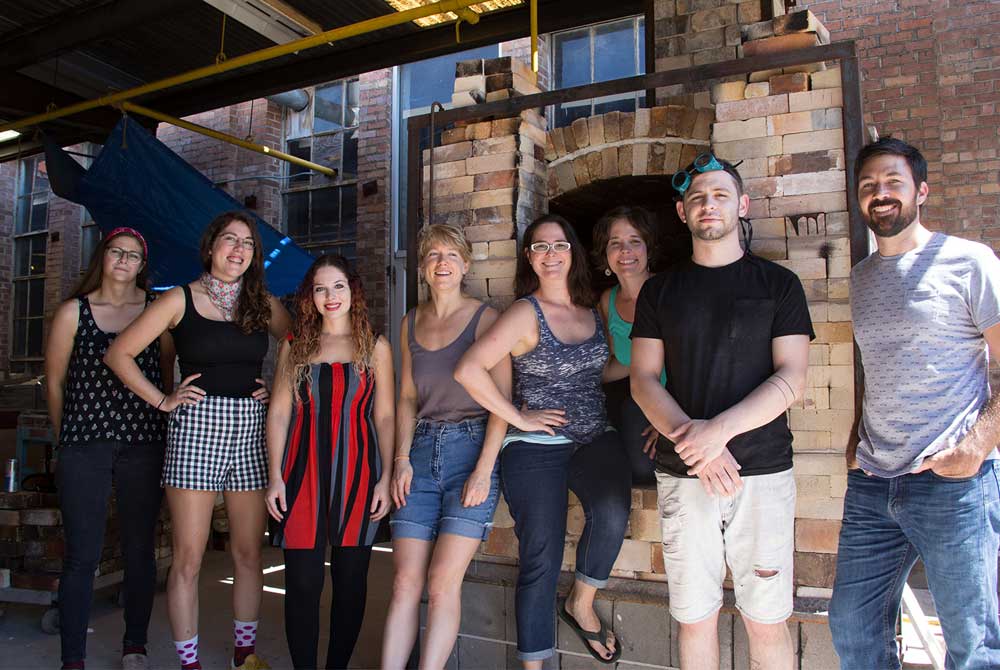 Associate Professor Mikey Walsh was in Kansas City attending the National Council on Education for the Ceramic Arts (NCECA) when she received news that LSU’s MFA ceramics program had moved up two spots in U.S. News & World Report’s 2017 Best Graduate School rankings, from ninth to seventh in the nation.

“Being there at NCECA with 19 LSU students and getting the rankings at the same time, I felt as much a strong responsibility to the legacy of LSU ceramics as I felt proud to be a part of it,” shared Walsh. “Our students, overall, were great ambassadors for LSU.”

For example, graduate student Naomi Clement was selected as the student ambassador at large at the conference, a prestigious and competitive two-year post. Jodie Masterson was a presenter in a well-attended panel, and Mike Stumbras, a second-year graduate student, was in several prominent shows, including the NCECA student juried show, one of the premiere exhibitions at the conference each year.

“Our students are really driving for success themselves and for the program, too,” added Associate Professor Andy Shaw. “They are exhibiting widely, applying for summer scholarships and studio assistantships at national arts and crafts workshop schools, and taking part in residencies in the U.S. and abroad. As much as each one is studying here at LSU for very specific and personal aspirations, our students know that they succeed best when they assist and promote each other. They invest in each other, making the studio a very happy and productive space.”

LSU ceramics faculty are great ambassadors for the program, as well. Shaw, who was selected for a 2014 McKnight Residency for Ceramic Artists, spent three months at the Northern Clay Center in Minneapolis in 2015, where he presented an exhibition of work completed during the residency. His tableware has received multiple awards, is shown widely across the U.S., and has been featured in recently published books. During his sabbatical in fall 2016, Shaw will take part in a two-month Sím residency in Iceland at the Korpúlfsstaðir studios and will complete a short residency at the Nova Scotia College of Art & Design. Walsh recently returned from sabbatical and completed a two-week residency at Haystack School of Crafts in Maine. Her work will be featured at the Harvey Meadows Gallery in Aspen, Colorado, and in Northern Clay Center’s Annual American Pottery Fest in Minneapolis this fall, and she has been invited as one of seven artists for “Artist and Mother,” a two-week residency at Red Lodge Clay Center in Montana for summer 2017.

“The ranking is the result of decades of hard work within LSU ceramics,” stressed Shaw. “Tremendous gratitude goes out to former faculty Joe Bova, Linda Arbuckle, Bobby Silverman, and Kate Blacklock, as well as to the generations of LSU MFAs who define the best elements of the field of ceramics.”

“My word for now is momentum,” added Walsh. “We now have a new building on the horizon, as well as a strong and ambitious group of grad students. My hope is to remain in forward motion with the full support of LSU.”

The LSU Studio Arts Building is undergoing a much needed renovation, with expected completion only a few years away. “The renovation will give our students opportunities that feel like only dreams right now,” Shaw stated. “We will use our current momentum to take the program in new directions.”