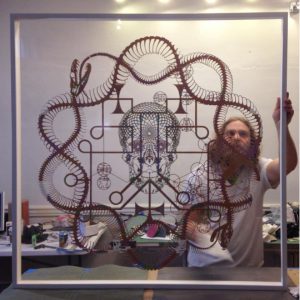 Work by Hunter Stabler, a graduate student in the LSU School of Art, is featured in two exhibitions: Under the Knife: Contemporary Cut Paper Art, August 23–October 14, at the Hicks Art Center Gallery at Bucks County Community College in Newtown, Pennsylvania, and Season of the Witch, July 22–September 4, at the Seligmann Center for the Arts in Chester, New York.

Under the Knife, curated by Sean Stoops, features 15 contemporary artists that utilize paper craft techniques, including finely cut paper artworks and installations, paper silhouettes and shadow puppet art, sculptural pop-up books, street art, and stop-motion animations. Season of the Witch, curated by Sarah Potter, reflects on the ways artists engage in ritual to reveal their personal beliefs and spirituality through the creation of their artwork. The artists featured in this exhibition turn artmaking into a modern-day magical practice.

Stabler is an artist creating intersections between handmade images and technologically generated images. His work explores notions of paranoia, ontological awakening, esoteric symbolism, and the ornamental eschaton. The formal elements of his work involve a play between the illusion of space, physical three-dimensional space, and the two-dimensional nature of paper. He creates pieces that are in conversation with ancient, canonical, modernist, and contemporary ideas of spatiality in art making. His work has been widely exhibited across the country and internationally including exhibitions at the Morbid Anatomy Museum in Brooklyn, New York; the Shelburne Art Museum in Shelburne, Vermont; the Hunterdon Art Museum in Clinton, New Jersey; and the Islip Art Museum in East Islip, New York.