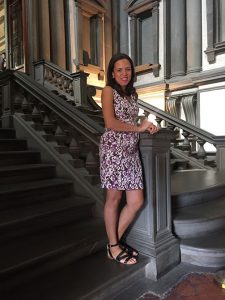 This summer, Elena Fitzpatrick Sifford, assistant professor of art history at LSU, traveled to Florence, Venice, and Padua to conduct research for her Italian Renaissance courses, and she presented a paper at the Sixteenth Century Studies Conference in Bruges, Belgium. Her travel was supported by the LSU School of Art and an LSU Office of Research & Development Junior Faculty Travel Grant. 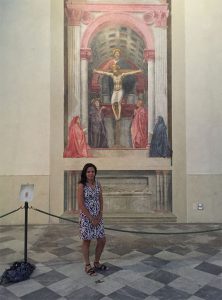 Sifford conducted research in Florence, Venice, and Padua for her Italian Renaissance courses at LSU.

Sifford’s study looks at such images within the context of their larger manuscripts as well as documentation on the African presence in Mexico, revealing their ethnographic complexity and the development of concepts of alterity in the early Viceregal period. Her paper dislodges dominant discourse on the wholly indigenous and Spanish contributions to Mexican history. The indigenous artists’ renderings of the first Afro-Mexicans showcase the liminal space that Africans occupied in early colonial society as chattel under civic law but human under canon law.

“This subject is particularly salient on the wake of the recent 2015 Mexican census, which, for the first time, acknowledged the category of Afro-Mexicans after centuries of denial of the country’s African population,” explained Sifford.

Sifford was invited to present her paper this spring at Rice University, sponsored by their departments of art history and history. She is currently working on a book-length project based on her research.