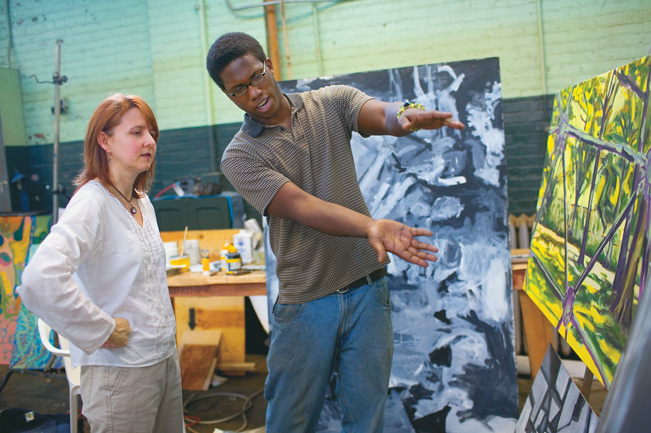 The program ranked 62 in the 2013 report, tied with nine other universities. The ranking shows improvement from a rank of 76 in the 2009 report. As part of this category, the LSU School of Art’s master’s program in ceramics was again among the top 10 programs in the country, ranking at nine in the 2013 report.

“We’re highly gratified to note that the work of our faculty over the past four years to develop the profile of our graduate programs has been recognized by our peers,” said Rod Parker, director of the LSU School of Art. “With support in place from the state and the university to renovate the Studio Art Buildings over the next two years, the School of Art is on track for a Top 50 ranking in 2016.”

In addition to the five main professional disciplines ranked annually (business, education, engineering, law and medicine), U.S. News & World Report also periodically ranks programs in the sciences, social sciences and humanities, the health arena, and many other areas based solely on the ratings of academic experts. This year, new peer assessment surveys were conducted and new rankings were published online for the health specialties of occupational therapy, pharmacy, physical therapy, social work, audiology, speech-language pathology and clinical psychology, as well as for public affairs and fine arts. Other university graduate programs that saw updated periodic rankings in the 2013 report include the LSU School of Social Work, ranked 79, the LSU Department of Communication Sciences & Disorders’ master’s program in speech-language pathology, ranked 52; the LSU Paul M. Hebert Law Center, ranked 79; and the LSU School of Veterinary Medicine, ranked 22.