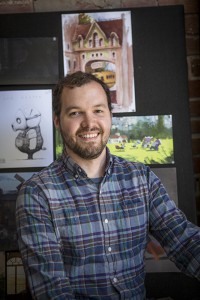 Bradley Furnish, editor at Pixar and 2004 LSU School of Art alumnus, will be returning to LSU to visit classes and present a screening of his recent project, The Dam Keeper, which was nominated for an Oscar in the animated short category.

The screening of The Dam Keeper will take place April 16 at 5 p.m. in the Digital Media Center Theatre on campus, with a reception beginning at 4 p.m.

The film is set in a desolate future where one small town’s survival is left up to a large windmill dam that acts as a fan to keep out poisonous clouds. Despite bullying from classmates, the dam’s operator, Pig, works tirelessly to keep the sails spinning in order to protect the town. When a new student, Fox, joins Pig’s class, everything begins to change.

So how did this Baton Rouge native come to work at one of the most successful animation studios in the world as well as edit an Oscar nominated short film?

Put simply, Furnish saw what he wanted—and went after it.

When Furnish saw the Pixar movie Monsters Inc. while in his first year of college, he was inspired by the film’s innovative animation and heart-felt storytelling. “I was impressed by the essence of the craft and the story at the heart of their projects,” he said.

Set in Monstropolis, a town crawling with monsters, the story is built around the characters scaring children in order to purposefully elicit fear from them. This in turn causes children to scream, providing the town and its inhabitants of monsters with a basic source of power.

Furnish came to LSU with a love of film and art. At the time there was no film department at LSU, so Furnish looked for other creative outlets while continuing to make short films on the side.

He ended up trying out the graphic design program in the School of Art and loving it. He was asked to join the school’s Graphic Design Student Organization (GDSO), which gave him the opportunity to do real design work and develop a skill set that has benefitted him in his career as an editor.

Through GDSO, Furnish learned how to give critiques and take critiques, all while collaborating with others. “It takes one hundred bad ideas to get to a single good idea, and that is a key principle I learned working in GDSO.”

While at LSU, Furnish was fortunate enough to have several instructors who purposefully pushed him to challenge himself, thus minimizing his own fear of failure. This especially helped when it came time for Furnish to make decisions about his life after college.

After graduation, the Baton Rouge native planned to move to Los Angeles to work in film but found the city a bit overwhelming. He settled in San Francisco and, shortly after, applied for a job at Pixar. But he never heard back.

For the next three years, Furnish did freelance work around the area until he heard of a job opportunity at Pixar. “I heard through a friend of a friend of an opening, and I got hired as an editorial production assistant.” In that position, he was able to work on films such as Toy Story 3, Brave, and Toy Story That Time Forgot.

Since then, he has worked his way up at the company and has enjoyed the learning experience every step of the way. He realized how everything he practiced in graphic design was very similar to the skills he used in editing. “The practice of trial and error and various reiterations of visuals are practices you go through in both design and editing.”

Now, as editor in the promo department, he edits short pieces of content for feature films, including the forthcoming films Inside Out, The Good Dinosaur, and Finding Dory. The promo spots are sometimes used in theatrical trailers but are mostly used to highlight a single character or scene on a cross-promotional platform, such as the Disney Channel.

Furnish works with the film’s director to achieve his or her vision, as well as camera operators and effects technicians to ensure the visual components are in line with the story. He revels in the opportunity to be able to work with top-notch people whose talents prompt great responses from audiences of all ages.

The lesson that one’s mistakes can often bring rewards that successes can’t is one that Furnish has learned over the years and wishes to pass on to current students. Fear, just like in Monsters Inc., can be powerful and often cause people to shy away from pushing themselves further.

“When you are able to push yourself beyond the fear of failure, you remove any internal limitations, and that is when you take risks,” he continued. “Sometimes failing is more important than success because you can adapt and still learn after failure.”

With no risk, there is no reward, and it is clear from Furnish’s successes that fear of failure has not stopped him. As far as he can see, Furnish will continue to work at Pixar. After all, he loves what he is doing.

“When you finally get to show people something you have spent years working on and they erupt in laughter—that is gratification.”

At the end of Monsters Inc., the monsters find out that joy and laughter produce even more power than fear, and in Furnish’s case, if you have enough power to move past the fear, the joy at the other end is simply overpowering.

Bradley Furnish is an editor at Pixar Animation Studios. His film credits include Toy Story 3, Brave, and the Toy Story That Time Forgot television special. In addition to his work at the studio, Bradley continues to work on independent projects ranging in content and style. He is particularly proud to have edited Pixar’s It Gets Better PSA, the short film Cologne, and, most recently, the hand-painted animated film The Dam Keeper, screening at the LSU Digital Media Center Theatre on Thursday, April 16, at 5 p.m. Bradley graduated from the LSU School of Art with a BFA in graphic design in 2004.