Skip to content
COLLEGE OF ART & DESIGN Home / Art & Design / Graphic Guts: The Art of Luba Lukova at the Glassell Gallery through April 26, 2015

“In our hearts we know that there is right and wrong, truth and lies.” —Luba Lukova

The LSU School of Art invites you to celebrate the powerful and evocative works in the upcoming exhibition: Graphic Guts: The Art of Luba Lukova. This body of work will be on display at the LSU School of Art Glassell Gallery in the Shaw Center for the Arts from March 14–April 26, 2015. Lukova will present an Alfred C. Glassell Jr. Endowed Lecture, also titled “Graphic Guts,” to the community on Wednesday, March 26, at 5 p.m. in the Design Auditorium, room 103. On Thursday, March 27, from 6–8 p.m., there will be an artist’s reception at the Glassell Gallery. All events are free of charge and open to the public.

Internationally renowned, New York–based Luba Lukova is regarded as one of the most distinctive image-makers working today. Transcending language, culture, and politics, her Graphic Guts collection features passionate visual reactions to many of the pressing issues of our time. 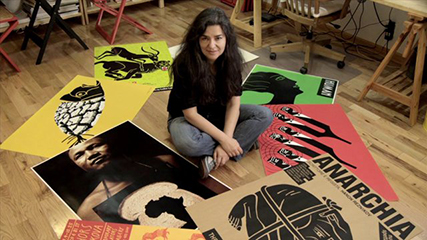 Originally from Bulgaria, Lukova came to America in 1991. Since then she has become a U.S. citizen, and her work has become nationally recognized. As an extension of her career, she has long focused on issues such as peace, censorship, immigration, ecology, hunger, and corruption.

“I use the language of design to express a message,” Lukova explained.

In her work she uses bright colors to create bold graphic imagery that speaks to her audiences. The work is uncomplicated in its use of words and imagery. The difficulty in her process is achieving simplicity as a result of hundreds of preliminary sketches.

Opinionated, charming, serious, yet full of life and laughter, Luba Lukova is a complex woman with the heart of a child and the power of the artist. When asked what she hoped to accomplish with her work, Lukova spoke of her intention, “I hope these images can be a catalyst for action. Art can change the world; I believe that. If it weren’t true, there wouldn’t be censorship in this world. Art can be an incendiary device, and I know that firsthand. The images in this portfolio address many of the complex issues we face in this election year, but the problems depicted are not only American, they exist in many other places. In the U.S. we are blessed with freedom of expression, and that is why it was possible for me to publish such a project. This is not so in many countries around the world. I hope this publication can speak to an international audience as well.” 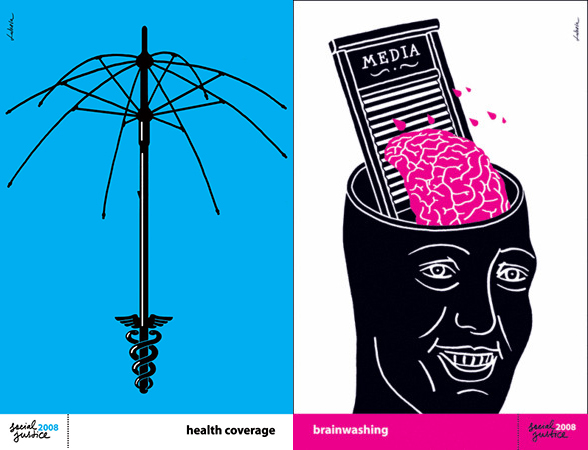 She uses metaphors that present well-known issues, sometimes using humor, such as in the posters, Health Coverage and Brainwashing. Her intention is for the viewer to have to “think and act.”

She explains the theory behind art as a message.

“Art always has a message, even if the artist doesn’t intend it. The viewers interpret what they see, and that becomes the message. Poster art is a different category where the idea needs to be accessible. The poster truly is the message. But generally speaking, there is no formula for what art should do. Good artists listen to their hearts when creating art.”