All the King’s Men by Justin Bryant is featured in the Arts & Science Center for Southeast Arkansas’s permanent collection.

Artwork by LSU MFA candidate Justin Bryant is featured in an exhibition and catalog titled Here.: African American Art from the Permanent Collection, on display at the Arts & Science Center for Southeast Arkansas in Pine Bluff. 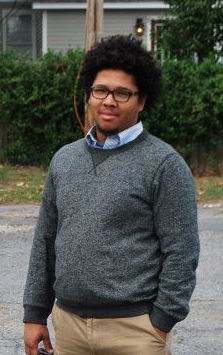 The exhibition features work from the Harlem Renaissance and Black Arts Movement and contemporary works by nationally renowned African American artists and acclaimed faculty and students from the University of Arkansas. The exhibition, sponsored by Simmons Bank, “focuses on these artists’ experiences here in America, here in the South, here in Arkansas, and here in Pine Bluff.” The catalog, published on the occasion of the exhibition, includes scholarly essays related to the permanent collection of African American art. The exhibition will be on display at the Arts & Science Center through October 15, 2016.

Bryant’s featured work, All the King’s Men, a watercolor triptych, is from a series of paintings that deal with plantations and architecture built by slaves, depicting contemporary African American figures crowned with buildings or architectural elements.

“I arrange and reimagine these people and structures in the way I want them to be seen, allowing the person viewing the work to do the same,” stated Bryant. “By claiming these buildings, I want to spark a conversation about how they were created. Hopefully, this creates a form of welcome to spaces that were not historically available to African Americans, positioning the work through a form of pride instead of fear.”

Bryant said the series was inspired by Langston Hughes’ poem, “Negro,” in which Hughes illustrates the behind-the-scenes work of the “negro” from ancient Egypt to what was then the 1920s. “Since I didn’t live during the time of slavery or Langston Hughes, I try to approach the past through a more contemporary framework,” explained Bryant. “Therefore, part of the subject matter is about looking back and creating a visceral experience that best illustrates a present state of being.” He also drew inspiration from Carrie Mae Weems’ Roaming and Africa series. “In these two bodies of work, Weems questions the power of structure that is in place. Through her photographs, she is visually describing how buildings are an affirmation of the social structure.”

Bryant is excited to be included in the exhibition and catalog. “It sounds cliché, but what got me interested is the Arts & Science Center’s involvement with the community. A lot of school kids come in, and I remember being a kid and going to a museum, how that experience influences you and inspires you to make art. But not everyone has access to museums, especially in rural areas.”

Originally from Stuttgart, Arkansas, Bryant lived in Little Rock for eight years before coming to LSU to pursue his MFA. He received his BFA in studio art from the University of Arkansas at Little Rock, and he mentored and taught youth from underserved communities in after school programs for Art Connection, now The Hub, a nonprofit organization based on the Boston Artists for Humanity program.

Bryant is teaching at the Little Rock Arkansas Center and Stuttgart Art Center this summer, and he plans to continue teaching and working with youth from underserved communities after he receives his MFA. He is currently creating work based on similar themes for his first solo show, to be exhibited in spring 2017 at the Arts & Science Center for Southeast Arkansas.

Read more about the Arts & Science Center for Southeast Arkansas at asc701.org, and the exhibition was featured in an article published by the Arkansas Democrat-Gazette at arkansasonline.com/news/2016/may/29/find-of-a-lifetime-20160529.