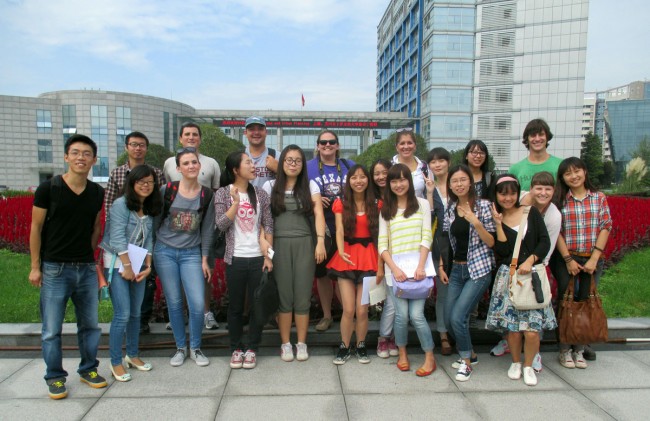 Students in Professor Bruce Sharky’s Advance Topic Studio, Culture and Design: Exploration into New Territories, presented their final projects to jurors and critics on November 26. The students enrolled in Sharky’s studio had a choice of two projects and locations: Chengdu, China, or Denali National Park in Alaska. Both groups had the opportunity to travel to their project sites at the beginning of the semester.

Seven LSU Robert Reich School of Landscape Architecture (RRSLA) students—four third-year graduate students and three fifth-year undergraduate students—traveled to Chengdu, China, to work with landscape students from Sichuan Agricultural University, whose landscape architecture program is ranked fourth in China. Sichuan Agricultural University (SAU) is located in a very productive agricultural region of China that produces similar crops to Louisiana, including rice, corn, soybeans, and sugar. The city of Chengdu has a population of 18 million and is an important economic center for bio-medical research and high-tech development.

The field trip was the first step in an effort to initiate an exchange program for faculty and students between LSU and SAU. 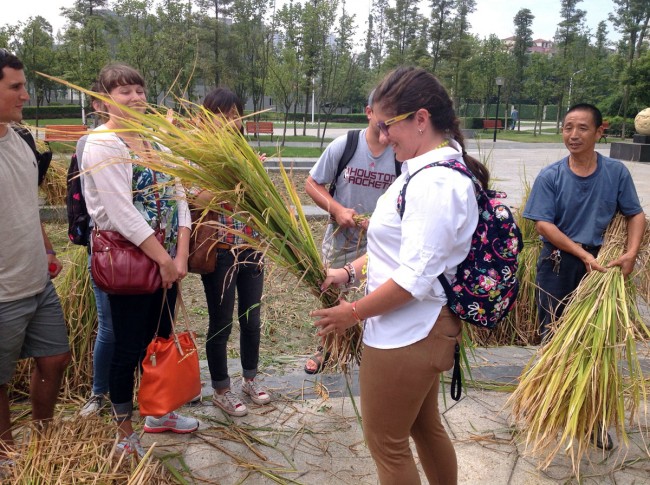 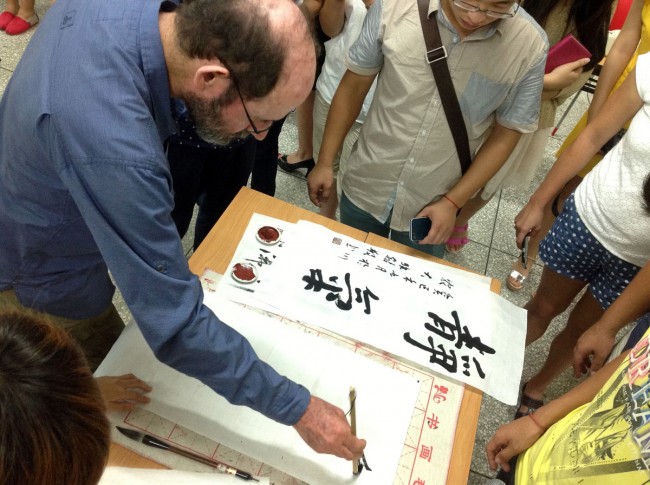 The 17 SAU students selected to participate in the 10-day collaborative studio were required to attend a three-week intensive preparation course in the summer of 2013. The course was designed to familiarize the students with English, landscape design vocabulary, and cross-cultural considerations that included an introduction to RRSLA’s studio culture. Dr. Guo Li, who was a visiting scholar at RRSLA for one year prior to the joint studio endeavor, was one of the SAU faculty members who led the preparatory course, along with Dr. Sun and Guanghui Zao.

SAU landscape students and Dr. Guo Li greeted Sharky and the LSU students with a welcome poster and flowers upon their arrival at the airport in Chengdu on Tuesday, September 10. The following day they met with Dean Chen of the Landscape Architecture College and toured the SAU campus, a fairly new complex, with several high-rise buildings and heavily landscaped grounds.

The Chinese government sponsored the trip and paid for all of the American students’ expenses while in Chengdu, including meals, lodging (the students stayed in dorms at SAU), transportation, and museum fees. While in Chengdu, Sharky presented two lectures at SAU and met with the vice chancellor and several deans and faculty members who were eager and supportive of further establishing faculty research and academic and student exchanges between the two universities.

In the two-week collaborative studio, LSU and SAU students worked on a cultural and agri-tourism project based on a site adjacent to the city of Ya’an, located in the mountainous western fringe of the Sichuan Basin on the Quingyi River, about 80 miles, or two hours, southwest of Chengdu. 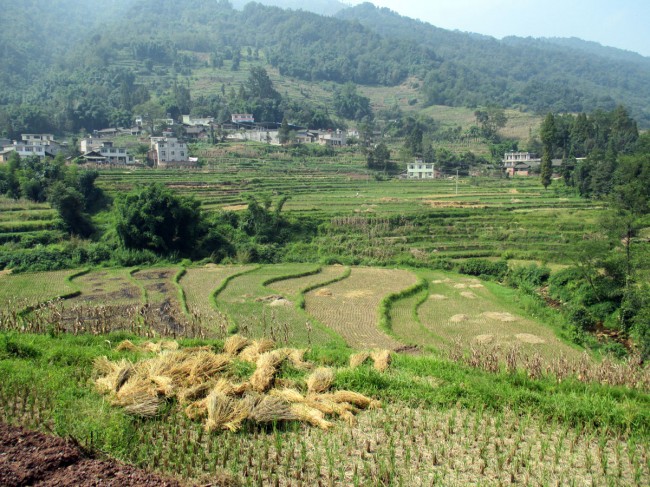 Project Site outside of Ya’an

The project teams were charged to explore strategies for preserving an agrarian way of life that could be a model for preserving other cultural resources that are under threat as China embarks on the urbanization of the country. Aspects of the project included developing contemporary architecture informed and inspired by traditional, rural farm architecture and creating a model toward sustaining rural life that enhances economic opportunity and self-sufficiency for the villagers—a living cultural preserve.

On Friday, September 13, the students took a bus to the city of Ya’an, where they visited a museum and then hiked through one area of the project site. For the Chinese students living in the city, the Ya’an rural landscape was as new and unique as it was for the Americans. Prior to the visit, Guanghui presented the area’s highlights to help the students understand the relation of Long Yan Village to the entire area as well as the site’s villages, agriculture, landmarks, and history. The Tea Road to Tibet originated from Ya’an, an important tea-growing region, and Mending Mountain in Ya’an is where the first tea was cultivated in China. 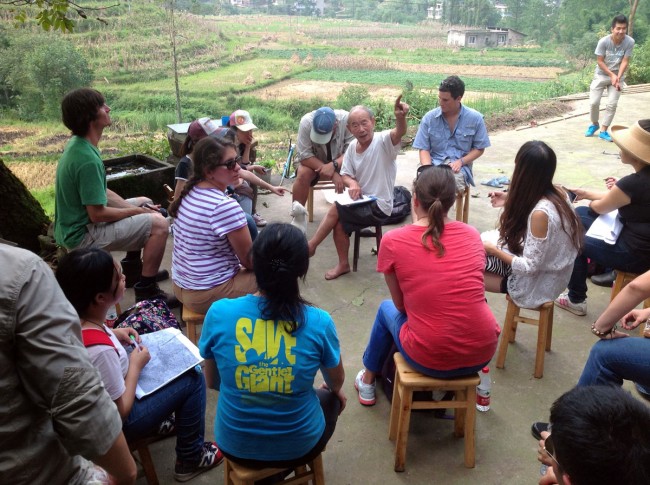 Upon their return to Chengdu, the students were divided into four teams to work on a site analysis and summarization of the field work. The next morning, SAU held a university-wide information fair where the colleges set up booths to meet prospective students. The LSU students and Professor Sharky were invited to sit at the landscape architecture booth to answer questions about the MLA program at LSU. Sharky spoke with two students interested in studying in America. 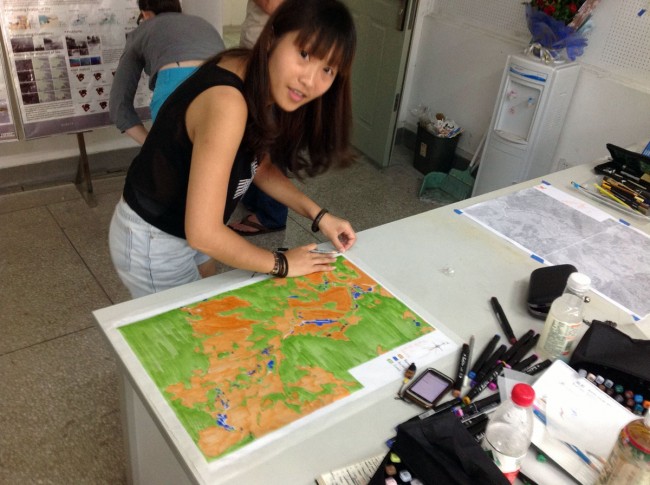 Students worked on broad brush ideas for their site plans 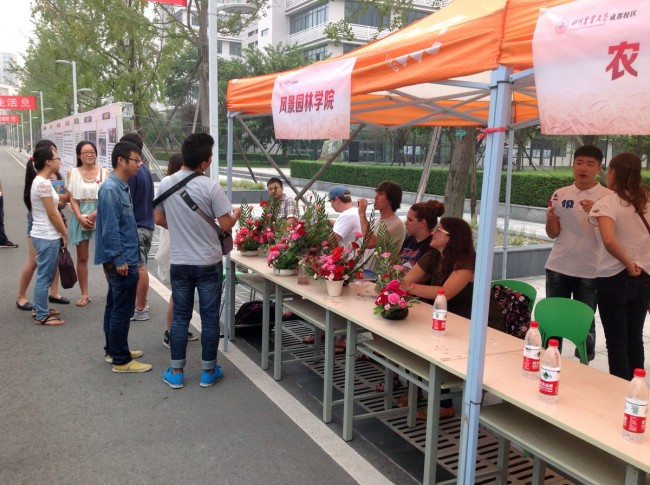 On September 18, Sharky and students traveled by bus to several cultural sites including Dujiangyan Village, a World Heritage Site along the Ming River, an originator of hydrologic engineering for ancient river control and water-works technologies. The students also visited the Chengdu Research Base of Giant Panda Breeding and Wangjiang Tower Park, designed as an ode to the female poet Xue Tao, one of the top poets of the Tang Dynasty.

On September 20, Sharky and the students headed to Beijing for three days of sightseeing. They visited popular tourist attractions, including Tiananmen Square, the Forbidden City, the Summer Palace, the Great Wall, and Olympic Village. While in Beijing, Sharky presented a design lecture at Ecoland and arranged for the students to visit the 300-person landscape architecture firm that is part of RRSLA’s internship program. 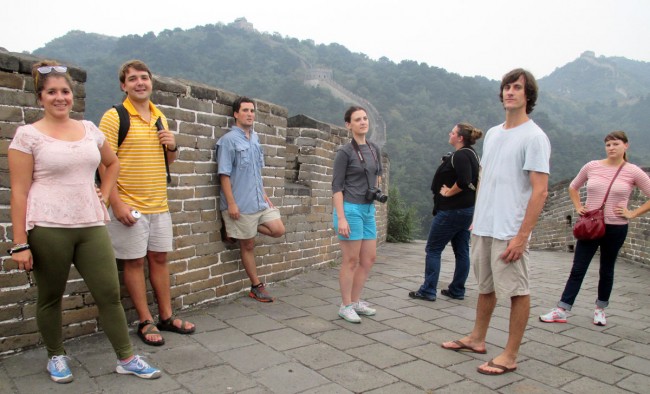 LSU students pose at the Great Wall of China in Beijing

Sharky and the students returned to Baton Rouge on September 23. Before they left Chengdu, the LSU and SAU students shared their site analysis maps and broad brush ideas for developing a master plan. After returning to LSU, students began working on a conceptual master plan for the entire area of the site and continued to develop their ideas for Long Yan Village. Each student was assigned to select and define a project from the site to work on individually.

Sharky’s future plans for collaborating with SAU include ideas of returning to Ya’an next year with landscape architecture and agriculture students to work together in developing more sustainable proposals for advancing the model of agricultural tourism. Elements Sharky wishes to investigate in future studios include signs of stress, landscape typologies, natural systems, cultural systems, and suitability questions.

“By conducting this collaborative studio, we helped prepare Chinese students wanting to study in America with experience in communication and studio culture,” said Professor Bruce Sharky. 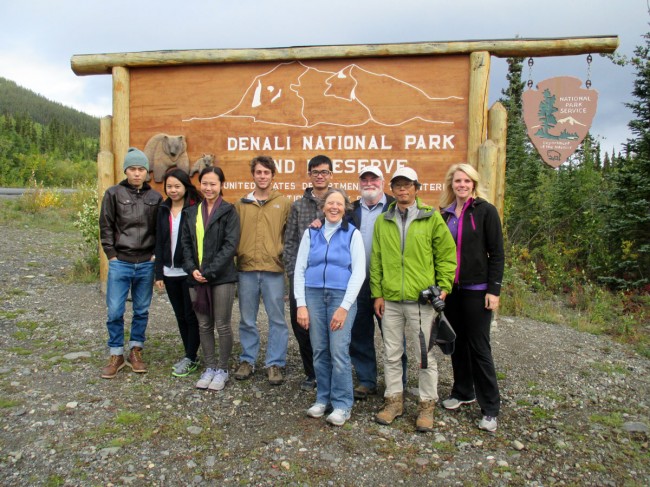 LSU students pose with Ken and Judy Pendleton at the entrance to Denali National Park, Alaska 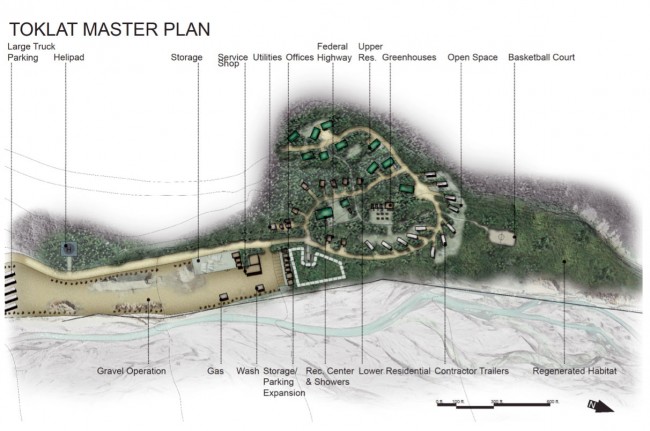 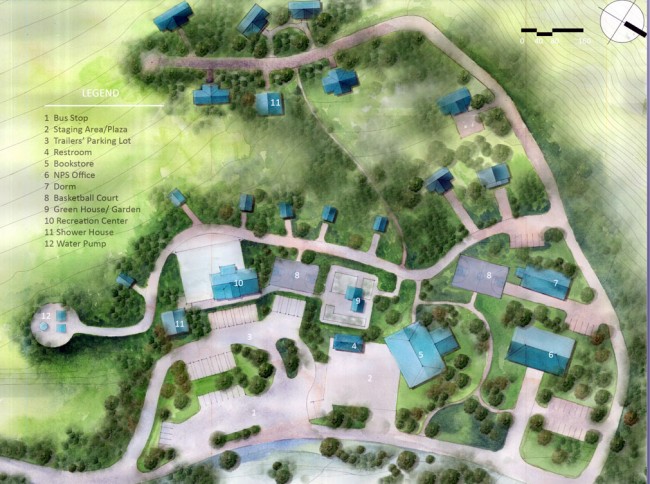 The students were charged with developing a facility, visitor’s center, and training area and backpacking, hiking, and camping site at Toklat Camp in Denali National Park. Toklat Camp is currently a maintenance camp for park roads with heavy equipment, gravel mining, and a camp for seasonal workers. It has water, a sewage system, and all support utilities, but students were encouraged to consider alternative energy sources for their projects. The students were tasked with evaluating the current plans for the site and to look at the potential opportunities for developing the site over the next 20 years. 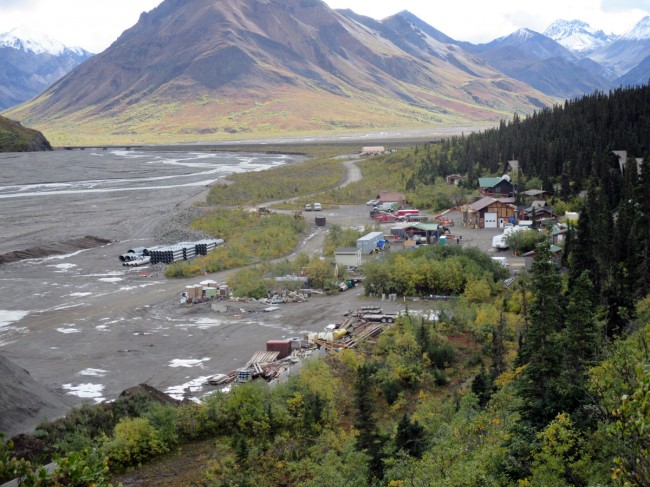 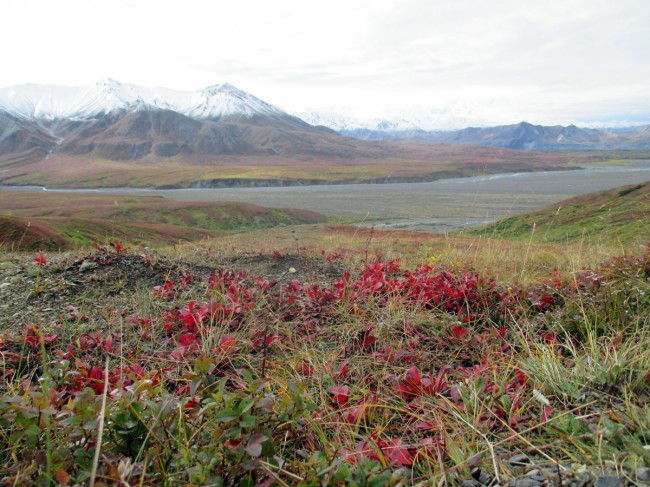 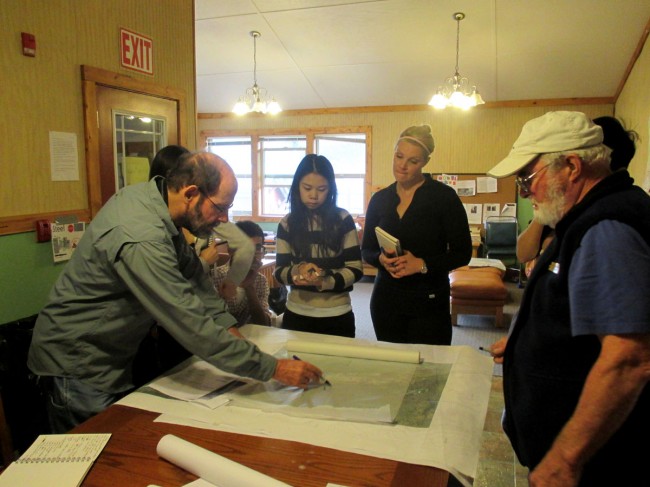 After each of field trips, Sharky scheduled a day for the students to present their experiences in China and Alaska. Surprisingly, the two projects—two sites on the opposite ends of the world!—had a lot in common, and students were able to apply each other’s experiences within their own work. 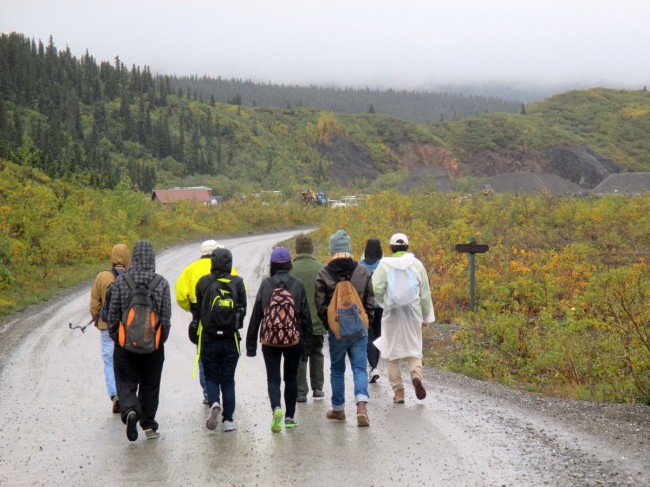 About the Master of Landscape Architecture Program at LSU
The Master of Landscape Architecture Program at LSU is well established and graduates routinely find jobs in design and planning firms, government agencies, and community-based organizations throughout American and abroad. The graduate curriculum is design oriented with opportunities for involvement in issues that range from those of relevance to the Gulf Coast region to those of international importance. The faculty’s diverse professional and research interests are integrated into the learning experience. Visit landscape.lsu.edu for more information.