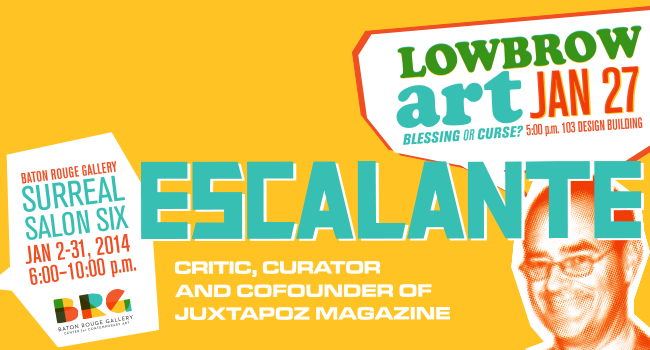 Baton Rouge (December 6, 2013)—Greg Escalante, co-founder of Juxtapoz magazine, will lecture at the LSU College of Art + Design and serve as the special guest juror for this year’s Surreal Salon Six exhibition at Baton Rouge Gallery this January 2014. Escalante’s visit to Baton Rouge is made possible through a collaboration of the LSU School of Art and the Baton Rouge Gallery center for contemporary art (BRGCCA).

One of the most influential voices in the pop-surrealist/lowbrow art movement, Escalante (also known as Joe Copro) is a respected art collector, gallery owner (Copro Gallery in Santa Monica, California), curator, and publisher.

Juxtapoz, the magazine Escalante is credited with cofounding along with artist Robert Williams, has become one of the world’s most widely-distributed art magazines. The magazine was launched with the mission of connecting modern genres, including psychedelic and hot-rod art, and founded upon the belief in the virtues of Southern California pop culture. Juxtapoz expanded its range in the early 2000s to cover other styles and sub-genres of underground art. Young artists who have received coverage in Juxtapoz include KAWS, Mark Ryden, Barry McGee, Todd Schorr, Camille Rose Garcia, Tim Biskup, Tom Sachs, and more.

Over the past 20 years, Escalante has put together some of the most important pop-surrealist/lowbrow art exhibitions, including Kustom Kulture (Laguna Art Museum, 1993) and Kustom Kulture II (Huntington Beach Arts Center, 2013). He has been a catalyst for change in contemporary American art and has helped catapult the careers of numerous visual artists. Escalante also produced the 2006 documentary film, The Treasures of Long Gone John.

As part of the School of Art’s 2013–14 Malleable Language season, Escalante will present a lecture titled “Lowbrow Art: Blessing or Curse?” at the LSU Design Building (Room 103) at 5 p.m. on Monday, January 27, 2014. Escalante will discuss his passion for pop-surrealist art and the evolution of lowbrow art from the movement’s beginnings to its current place in the art world.

Lowbrow art, also known as pop surrealism, began as a populist, visual art movement in Los Angeles in the late 1970s. With roots in underground comix, punk music, and hot-rod cultures of the street, lowbrow art has captivated the world with its gleeful, impish, sometimes sarcastic sense of humor, thanks in part by the success of Juxtapoz and prominent, early enthusiasts such as Escalante and Williams.

Both the School of Art lecture and Baton Rouge Gallery discussion are free and open to the public.

Also not to be missed is the Sixth Annual Surreal Salon Soiree, a costumed event in honor of the exhibition, which will be held at the Baton Rouge Gallery on Saturday, January 25, from 7–11 p.m.

All in all, the Baton Rouge community and LSU students and faculty will have multiple opportunities to delve into pop-surrealist art and culture and to hear about the lowbrow art movement from one of the genre’s original champions.

About the School of Art
The LSU School of Art combines the best of both worlds: the resources and faculty of a large liberal arts institution and the personal attention that comes in a close-knit community. Students in the School of Art develop specialized skills while experimenting with various mediums, exploring their own creative intuition, and studying art history and contemporary art theory. Education comes from intensive critiques, working studio classes, dedicated professors, and engagement with the larger arts community through a curriculum that combines academic teaching and hands-on experiences, both on and off campus. For more information, visit art.lsu.edu.