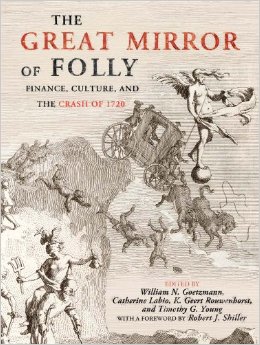 LSU School of Art Associate Professor Darius A. Spieth is a contributor to the book The Great Mirror of Folly: Finance, Culture and the Crash of 1720, newly released by Yale University Press. A milestone publication on the ramifications—both financial and cultural—of the first stock market crash in Western history, this multiple-author volume unites specialists on the subject from around the world. Professor Spieth’s chapter discusses “The French Context of Het groote tafereel der dwaasheid: John Law, Rococo Culture, and the Riches of the New World.”

The original Great Mirror of Folly (in Dutch: Het groote tafereel de dwaasheid) from 1720 is a vastly eclectic compendium of both textual and visual materials debunking fraudulent financial schemes that promised European investors vast riches to be extracted from the Louisiana territory. Although printed in the Netherlands, much of the cultural, iconographic, and topographic content of the publication refers the reader to the historical context of Regency France (1715–23) and the Rococo style that artistically defined the era of the Duc d’Orléans and his financial advisor, John Law.

Appearing in the Yale Series in Economic and Financial History, the 2013 Yale University Press publication is therefore a book about a book by the same name from 1720. The bursting of the world’s first global stock market bubble not only ended a period of inflation induced by the launch of paper money in the West, but also destroyed virtually overnight the dreams and fortunes of speculators in London, Paris, and Amsterdam. Their folly and misfortune inspired the compilation of an extraordinary Dutch collection of satirical prints, plays, poetry, commentary, and financial prospectuses that became known as The Great Mirror of Folly. The unfolding of this speculative bubble is also of relevance for Louisiana history, since its originator and founder of the Mississippi Company, John Law, can be regarded as one of the first developers of the city of New Orleans.

The Yale University Press volume is the result of a wide-ranging, interdisciplinary collaboration that uncovers the meaning and influence of the original Great Mirror of Folly. Contributors include European and North American scholars from the fields of finance, economics, history, bibliography, art history, literature, cultural studies, and social psychology. Edited by William N. Goetzmann, Catherine Labio, K. Geert Rouwenhorst, and Timothy G. Young, it is prefaced by Robert J. Schiller, winner of the 2013 Nobel Prize in Economics.

The volume is split between a textual section with illustrations and a plate section in which most of the prints included in the original Great Mirror are reproduced in narrative order. These plates shed light on the events of 1720 from multiple perspectives that include representations of stockbrokers as harlequins and foxes, the first known image of a bankrupt speculator flinging himself from a window, uncut decks of playing cards in which each image of the deck satirizes one of the leading figures in the bubble, and engravings depicting speculation as herd behavior.

Spieth’s contribution discusses how the study of the sites of Law’s Parisian activities and cues provided by contemporary art can help decipher the financial and satirical meaning of The Great Mirror of Folly. What emerges is a symbiotic relationship between financial speculation and the rise of Rococo consumer culture, stimulating demand for such items as carriages, furniture, jewelry, interior decorations, and, inevitably, art.

The volume is based on an international symposium by the same name, held in New Haven, Connecticut, in 2008, and sponsored by the Yale International Center for Finance. It is available from Yale University Press and other booksellers. Visit yalepress.yale.edu for more information.

About Darius A. Spieth
Darius A. Spieth is an associate professor of art history at the LSU School of Art. Prior to joining the art history faculty at LSU in 2003, Spieth served as Philip and Lynn Straus Curatorial Fellow at the Fogg Art Museum at Harvard University and worked for a commercial gallery dealing in Russian avant-garde art domiciled in Cologne, Germany, and Zug, Switzerland. A specialist in early modernism, Spieth focuses his scholarship on the interrelationships between art, intellectual history, and economics. Supported by a National Endowment for the Humanities grant, Spieth’s current research investigates art, auctions, and public spectacle in 19th-century Paris.

About LSU School of Art
The LSU School of Art combines the best of both worlds: the resources and faculty of a large liberal arts institution and the personal attention that comes in a close-knit community. Students in the School of Art develop specialized skills while experimenting with various mediums, exploring their own creative intuition, and studying art history and contemporary art theory. Education comes from intensive critiques, working studio classes, dedicated professors, and engagement with the larger arts community through a curriculum that combines academic teaching and hands-on experiences, both on and off campus. For more information, visit art.lsu.edu.