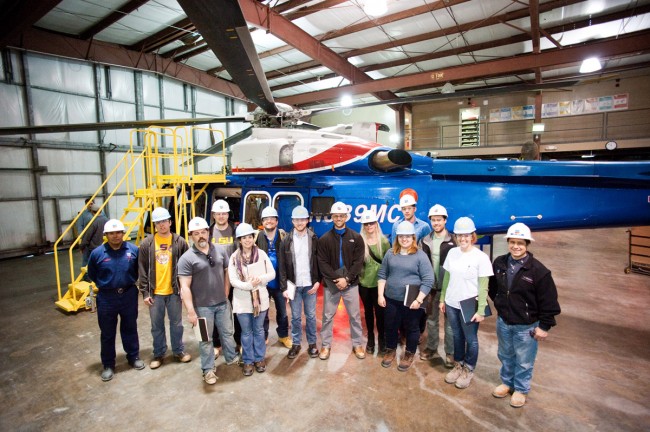 Students in A. Hays Town Professor of Architecture Ursula Emery McClure’s graduate-level studio,  LSU//Chevron: The Reimagined Shore Base, are exploring the relationship between humans and the natural world and seeking resolutions that will create a more symbiotic relationship while maintaining the requisites of contemporary life.

As a community partner of the LSU Coastal Sustainability Studio, Chevron agreed to participate in an architectural class project focused on exploring the coexistence of an energy shore base in Venice, Louisiana, and its coastal environment. The class looked at this critical energy infrastructure, which is one of the many support hubs for energy development off the coast of Louisiana.

A shore base is a critical base for operations and provides housing for workers that support the many activities of the oil and gas industry. The industry employs thousands of people who need to live along the coast to access their work environment. Shore bases provide the necessary link between land and sea, humankind and livelihood, country and economy, supply and distribution. These bases typically exist in dynamic and eroding coastal conditions but paradoxically demand a place of permanence. This is especially true in Venice, Louisiana, where annual inundation and erosion occurs with or without storm action.

The students have the difficult task of addressing these conditions, “actually building land,” Professor McClure said, while reimagining the shore base and what it means to operate in the indeterminate future. Their designs must integrate the needs of the industry: the shore base as a distribution base for goods, replete with helicopter pads and harbors, as well as roads for cars and trucks. The shore base should also have accommodations for workers, with amenities such as eating establishments, gyms, and recreational activities. In a nutshell, their designs must be sustainable and economically productive.

“It’s an amazing opportunity for the students,” said McClure. “If any industry has the know-how to do futuristic things, it’s the oil industry.”

The studio consists of several School of Architecture graduate students, all in their final semester at LSU, one landscape architecture graduate student, and a fifth-year undergraduate architecture student. At the beginning of the semester, the students took a 12-day field trip to Venice to visit the project site, tour Chevron’s operations, and meet with local community partners. They had a client meeting with Chevron officials, who shared information on the required functionality of a shore base and the typical challenges experienced in the coastal environment that need to be considered in the design of such a facility.

“From Port Authority officials, shipbuilders, and portable off-shore housing manufacturers to oil derrick specialists, every person we met on the field excursion gave us valuable insight into the industry and has continued to provide professional opinions as needed during our schematic design phase,” said Matthew McKeever, a School of Architecture graduate student.

“It was an amazing experience seeing all the supporting companies that contribute to the industry,” added Alex Klingsporn, a School of Architecture graduate student. “As we were looking at all the industrial pieces on Mr. Charlie (a shallow water off-shore rig now docked in Morgan City as a museum), we came to the conclusion that all of this is for six inches (referring to the diameter of the drilling pipe), and how it will eventually create a hole to access significant reserves of oil and gas underlying the soils of the US that are critical to meeting US energy demand. Every company, every piece of pipe, every machine, and every vessel we saw was ultimately for that critical six inches, and therefore our shore base designs will be a crucial part of the industry as well.” 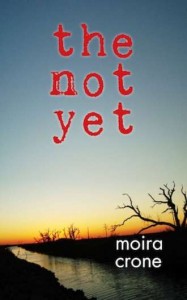 To push the students to consider more futuristic designs and concepts, McClure invited Moira Crone to LSU to participate in mid-term reviews and read from her science-fiction book, The Not Yet, which has been described as “disturbing, entrancing, and unforgettable.” The Not Yet is set in the 22nd century in the barely recognizable New Orleans islands. Crone is a widely published short-story writer and novelist. In 2009, she received the Robert Penn Warren Award for Fiction from the Fellowship of Southern Writers for her body of work. She also taught in the MFA creative writing program at LSU for several years.

“Collaborating with Moira Crone has helped us a great deal in the process of transforming a ‘sci-fi world image’ into an architectural reality,” said Brian Lucke, one of the graduate students participating in the shore base project.

Because Professor McClure’s studio fits within the criteria of the LSU Coastal Sustainability Studio (CSS), a trans-disciplinary program of the College of Art & Design, College of Engineering, and the School of the Coast & Environment, McClure sought and received sponsorship and support from CSS. Each project supported by CSS must be multidisciplinary, deal specifically with issues pertinent to coastal Louisiana, and must include collaboration with community partners. The sponsorship from CSS funded the students’ field trip to Venice and will help pay for other studio costs at the end of the semester, including the production of a book to collect and present the students’ work and potential travel costs for guest jurors and critics during final reviews.

“As part of the studio, each student has taken a unique approach to how a shore base operates and the effect it has on the natural environment. Professor McClure encourages us to establish a surreal quality in the project while maintaining efficiency. It is certainly a challenging task, but an exciting one that allows us to push the envelope in what is considered a shore base,” said McKeever.

At the end of the semester, the students will produce a full project exhibition, a book, and sample construction documents for the project. Final reviews are scheduled for the entire day on May 9, 2014. One or more representatives of Chevron will attend to assess the final reviews, and James Chinlund, the production designer for the July 2014 movie, Dawn of the Planet of the Apes, is flying to Baton Rouge from Los Angeles to serve as a juror. As usual, LSU School of Architecture alumni are invited to attend final reviews.

Based on the work from the students so far, LSU//Chevron: The Reimagined Shore Base final reviews should be interesting, to say the least.

Abstract: Alex Klingsporn
Humans have conformed to water’s presence in different conditions that depend on how water has been utilized to complete certain objectives such as shipping, shrimping, and fishing. Man has altered the land and water condition through the use of canals and channels to divert water and by dredging to create “useable water,” or to use dredged material to build land where water once was. The constant manipulation of land has caused it to deteriorate, and subsidence has occurred as a result and will continue to occur. Because of this subsidence, water is beginning to dominate the landscape. If water is becoming the future of landscape, then building into water’s permanence is essential. Allowing man to adapt and move with the landscape is crucial to the future of occupying this environment. Since the landscape is changing rapidly, the idea that water and land are the same can be assumed. Man and nature have changed land and water presence by moving the substances from place to place. Rather than negotiating between water and land, man will consider them as the same and build into them. 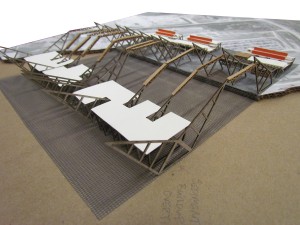 Abstract: Matthew McKeever
The ground is built. In South Louisiana, tracts of earth are moved, positioned, and compacted into aberrant configurations at vast scales outside of human range, which tests human comprehension. The ground is a composite. This act is necessary to achieve adequate elevation higher than the rising waters during a storm surge. It is an act of defiance. The site is unfavorable, so instead of embracing it, most fight it. Here arises the issue of actually two sites within one, removing earth from one area to build a composite of another. One site loses its place. Ground is stripped of its history; the work and time dedicated to build its infinitesimal elevation. The other site is a product—a product of layering land to form a base. Do these sites share a relationship greater than a simple transfusion? Does the sacrifice of one better the other? Does the built ground give back something in exchange for what it has taken? In the wake of making, the infant ground faces the issues of gage, extraction, and re-composition. The relationship between these two sites has two different scale implications: one in the now and immediate site boundary and the other in the greater landscape over a greater amount of time. Social anthropology has documented two types of exchange in human societies: commodity exchange and gift exchange. Commodity exchange is very familiar to capitalist societies. One exchanges a type of socially acceptable currency for a good or service. There is only a quantitative relationship between the exchangers, and the parties involved remain independent after the exchange. In a gift exchange, the relationship between the exchangers is qualitative, which makes them reciprocally dependent. One party is indebted to the other party after the transaction is completed. In the case of the oil and gas industry, the ground that bases their operations is a gift. By accepting the gift of ground, they are bound socially and morally to return that gift. Industry is indebted to nature. The giving and accepting solidifies a reciprocal relationship between industry and nature.

Abstract: Dean Kelly
This project will establish a new typology that is informed by the flexibility of the landscape and fosters a symbiotic relationship between natural processes and industry. The flux inherent to the landscape will be embraced by a system that adapts to unstable conditions. Through mobility and dexterity the structure will achieve permanence—it exists because it can change. The project will emphasize operational intuitiveness and formal clarity to enhance the efficiency of industrial processes and counteract the inefficiencies and complications presented by a dynamic building typology; the project will establish a new datum to optimize systematic performance. As a symbiont, the project must possess the capacity to learn, so that it does not simply react to external inputs, but proactively adapts in concert with environmental and industrial flux. The system’s flexibility will be predicated on the development of a framework which facilitates incremental expansion and constant variable adjustment. Through predictive and historical analytics the system will evolve its approach in pursuit of a balanced condition.

Visit the studio blog for more information, to view pictures from the field excursion, and for updates throughout the semester.

About the Master of Architecture Program at LSU
The LSU School of Architecture Graduate Program focuses on engaging students and faculty who share interests in design and the built environment. The backbone of the Master of Architecture program is the Design Studio, where students engage in the design education process. The graduate program integrates innovative design with technical, social, and practical concerns to address complex global conditions. Courses and studios focused on history, theory, sustainability, digital media, and community design provide the knowledge to concentrate on solving real-life problems in the built environment. Studio projects focus on spatial design, Louisiana coastal issues, and community design efforts. For more information, visit architecture.lsu.edu.