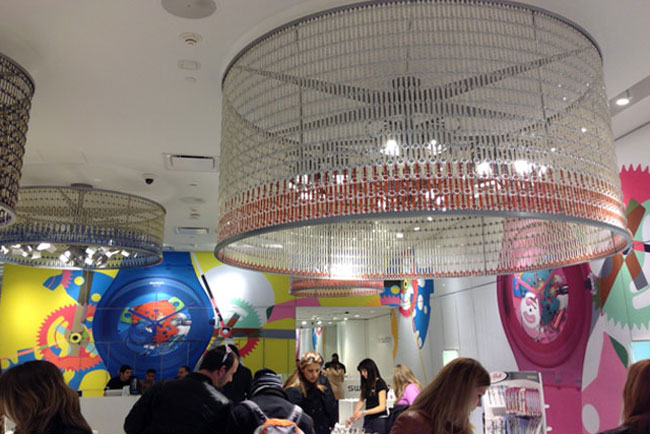 Students and faculty stayed at the Holiday Inn Soho on Lafayette and Howard Street, and spent their first evening taking in the hustle and bustle and twinkling lights of Times Square. Other sightseeing excursions over the following days included the Metropolitan Museum of Art, the Empire State Building and the Museum of Modern Art (MOMA).

“One of my favorite parts was going to the museums,” said interior design student Monica Caire. “MOMA had so many paintings done by some of my favorite artists.  The Met was overwhelming in the most beautiful way with all of their interesting collections.”

Classmate Haley Puckett was impressed to discover that the Empire State Building used many environmentally friendly “green” design elements. “That was interesting to see in such a famous landmark,” she said.

The first professional visit the group made was to Material ConneXion, an international team of multidisciplinary experts that prides itself on “bridging the gap between science and design to create practical manufacturing solutions.” Their clients have included Adidas, BMW, Hasbro, Nike and Starbucks, among others.
Puckett said, “Material Connexion is a really good place for designers who want to think outside the box as far as materials go and it is a really good resource to have on hand. Their products were truly one of a kind.”

Their next stop was farther uptown at Perkins+Will, an international and award-winning architecture and design firm. While there, students learned about several of the firm’s projects relating the Perkins+Will design philosophy and project development.  Students also asked questions of young designers and discussed the role of a designer in a large global firm.

Thursday the group visited retail stores in Soho including Alessi, Prada, and Vera Wang, focusing on the innovative lighting at these stores which were designed by LSU design alumnus Susan Tillotson, principle of Tillotson Design. Later, they headed to the New Museum of Contemporary Art on the Bowery.

On Friday, the itinerary included a visit to the Tillotson Design Associates office where students learned more about lighting design while enjoying complementary bagels and coffee and discussing the projects they saw the previous day.

“Until Tillotson, I didn’t even know lighting design firms existed,” said design student Lauren Pulling. “I knew there were lighting designers but I didn’t know they were in a firm of their own. I could have sat there all day and watched the lighting designer present the projects. It was so intricate and interesting.”
Next stop: David Easton, a design firm in Architectural Digest‘s top 100.  Mr. Easton and Cobus Gauche elaborated on designing in the exclusive market of multimillion dollar residences.  The students noted the emphasis on details and the intimacy of the client-designer project relationship.  Students then visited the product manufacturer, Knoll, Inc., touring the showroom and getting a brief history of the firm and its philosophy. Knoll’s top textile designer met with students to give them an insider’s guide to the intricate world of textiles.

According to former department Chair T.L. Ritchie, the field studies were organized to expose students to a variety of buildings and firm types and sizes in order to broaden their perspective of the opportunities available to them. Monica Caire thought this was a great success. “Visiting a wide range of firms helped give me a better idea of where I think I will fit in after graduation,” she said.

The day culminated in a trip to the renowned High Line, a public park built on a 1.45-mile-long elevated rail structure running from Gansevoort Street to West 34th Street on Manhattan’s west side. The High Line, a gathering place for lectures, public performances, and dining outdoors, re-purposes industrial infrastructure as public green space. “The intense urban fabric of New York gave students an excellent opportunity to experience the interrelationship between interiors, architecture and exterior context,” said Ritchie, who was one of the trip chaperones. “They also learned to discern good design, whether an interior or exterior space.” Students and faculty then headed off to a nearby pub overlooking the High Line to meet with LSU alumni living and working in New York where they shared experiences and had time to network.

The last day in New York was a free day with chaperones leading optional trips to the likes of the American Museum of Natural History, the Guggenheim Museum, and the Statue of Liberty and Ellis Island.

“My outlook on design has changed immensely since the trip,” said design student Amira Elkhatib. “Design was in every building even if it wasn’t apparent from the exterior. For example, when we went to John’s Pizza for dinner, the exterior looked small and not very extravagant, but the interior was magnificent with an intricate ceiling that immediately made you look up. New York left me with inspiration to draw from for many years to come.”

The day ended with a subway ride from Canal Street to an MTA bus which students and faculty took to the airport. “The way the entire city functions from the subway system to fire exits, really showed that good design is about solving problems,” said Maggie Boggs, a senior. Boggs said she found the city so inspiring, she moved there a month later.