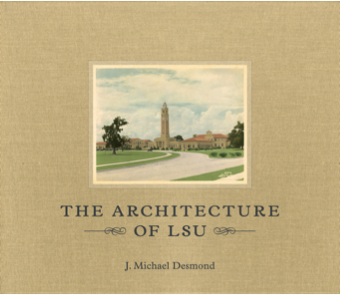 This month, LSU Press releases Architecture Professor J. Michael Desmond’s new book, The Architecture of LSU, a publication that details an architectural legacy dating back to the Renaissance and shares the architectural principles that guided the creation of one of the most unique academic environments in North America.

In The Architecture of LSU, Desmond traces the university’s development and includes a wealth of photographs, plans, drawings, and maps that underscore the contributions of key historical figures as well as the genealogies of the campus’s architecture and planning. By meticulously detailing the origins and evolution of LSU’s architectural core and exploring the fundamentals of American college campus design, Desmond shows the far-reaching rewards of public environments that integrate natural and constructed elements to meet both practical and aesthetic goals.

Integral to the book’s creation, says Desmond, was the $180,000 Campus Heritage grant he and his colleagues received in 2006 from the Getty Foundation in Los Angeles.  “These grants were designed to help colleges and universities create historic preservation plans,” he says, adding that he was the principle investigator for the award, but he ended up with multiple collaborators across many disciplines at LSU. “The environment is inherently interdisciplinary,” Desmond says. “We all have a stake and we all have different kinds of expertise, interest and concern for the environment. It’s all overlapping and intertwined. It’s all necessary.”

Desmond will sign copies of the book on May 14 from 5-7 p.m. at Barnes & Noble on campus at LSU and on July 11 5-7 p.m. at the Old Governor’s Mansion hosted by the Foundation for Historical Louisiana.