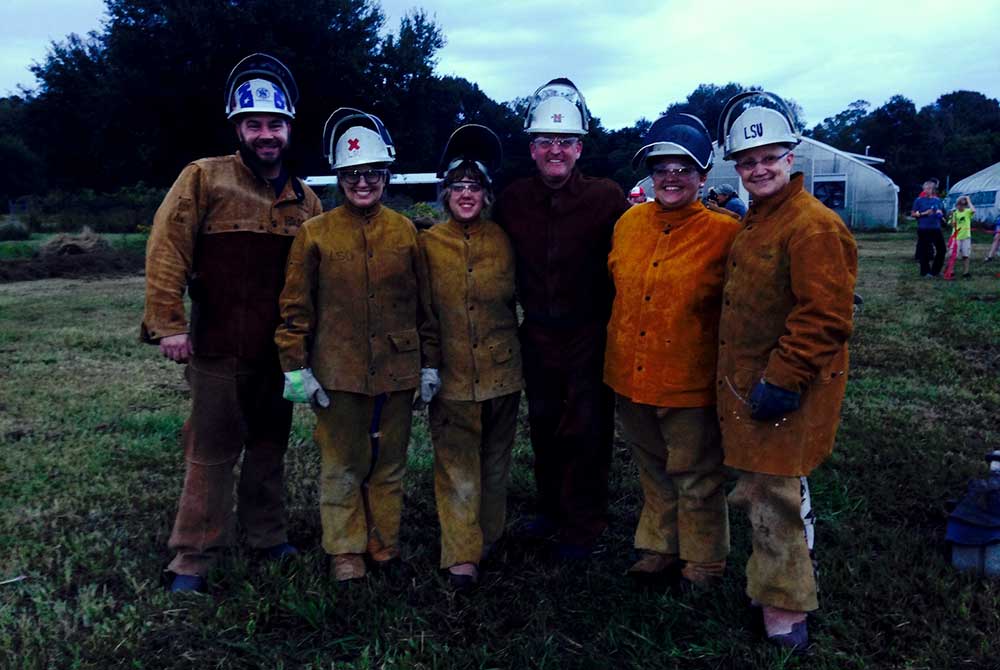 Williams received his MFA from the LSU School of Art in 2008 and is currently an assistant professor of sculpture at Nicholls State University. Each year he hosts an iron pour with current students and alumni of the Nicholls State sculpture program. This year, LSU undergraduate sculpture students Michelle Springett, Grace Simonson, and Jennifer Carlisle and LSU graduate student Cassidy Creek participated in the event.

LSU students who are experienced at making molds with resin-bonded sand and standard investment and casting in bronze and aluminum in the the LSU School of Art’s well-equipped foundry jumped at the chance to cast iron with the students at Nicholls State University.

About the Iron Pouring Process

Iron melts at close to 3,000 degrees, almost 1,000 degrees higher than bronze, necessitating that artists build their own furnaces from basic materials such as steel drums, sand, cement, squirrel-cage fans, and propane torches. Hand-built furnaces facilitate a fundamental understanding of the process, and preparing and operating a furnace requires a great communal effort.

The LSU crew arrived at the Nicholls State University farm early in the day, toting their molds, safety gear, and a few hundred pounds of scrap iron they had pounded into small pieces the evening before. 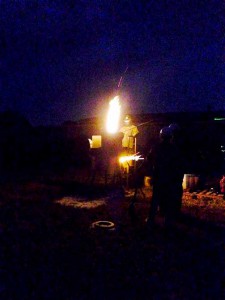 A fire fueled continuously by carbon rock (called coke) and a squirrel-cage blower slowly raises the furnace temperature while charges of metal and coke are weighed and the molds and equipment are laid out. When the furnace reaches a temperature of roughly 2,700 degrees, the crew begins alternating between adding portions of metal and fuel. The small pieces of iron melt and trickle down between the pieces of coke and collect in the lower portion of the furnace, known as the well. When the well is filled the blowers are removed, and the crews stand ready with one or more ladels to catch the molten iron, which rushes out in a glowing stream when the sand and clay seal, known as a bot, is chipped away from the spout. When each ladel is filled, the two-person ladel crew walks it over to the molds, skims any impurities, known as slag, from the surface of the pot and pours the iron into the molds. This activity must take place swiftly so the metal remains hot enough to flow easily into the mold cavity. It is mesmerizing to watch this process in the dark. 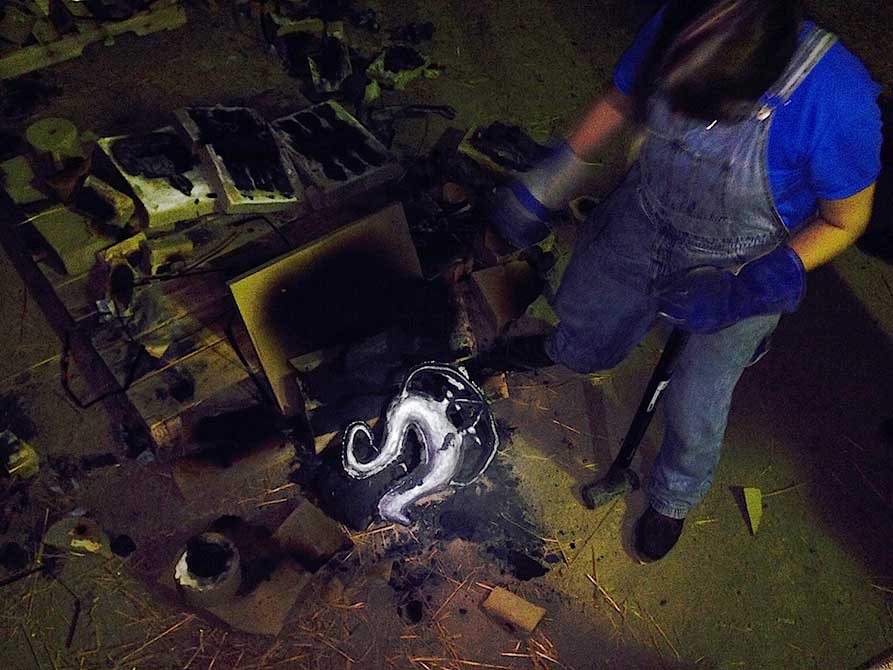 While waiting for the metal to cool, the group enjoyed a meal and listened to a few artists share their work, including LSU School of Art studio technician Alex Cooper. Later, the sculptors hauled the molds into the barn and broke them open to see how their sculptures had cast.