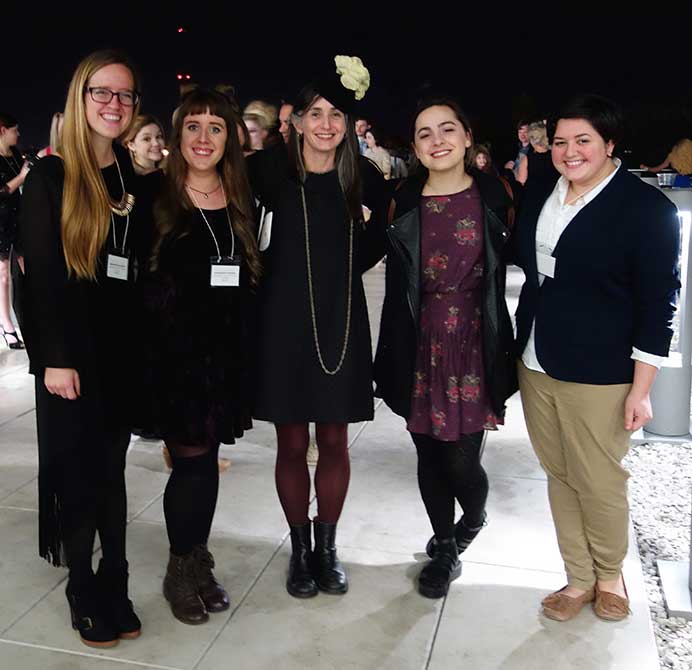 Since 2007, Culture Candy’s Uncommon Thread Wearable Art Show has hosted a national competition to showcase the best in wearable art. This year’s event, titled Epilogue, asked artists to meditate on notable books, authors, or literary characters and use wearable art as means of opening a conversation about these influences. By revisiting the stories and writers that have made a personal impact, artists were encouraged to create garments that serve as an epilogue to a single novel or a writer’s entire career. 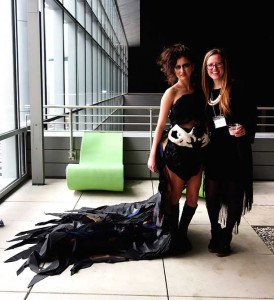 Savanna LaBauve’s work, City of the Unseen (bisque-fired ceramic, dyed rooster feathers, and yarn), worn by School of Art student Catherine Velasquez, was inspired by Cassandra Claire’s The Mortal Instrument series. “Part human, part angel, shadow hunters make up a secret society that protects humans from unseen demons. Clary just found out she was one of them,” explained Savanna. 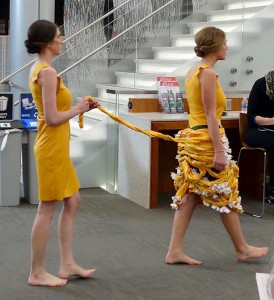 Ronni Bourgeois’s The Unraveling of a Woman

self and the enlightened self,” wrote Ronni. “This undoing of the fabric alludes to the worry that Mrs. Dalloway feels throughout the novel as she questions the past choices she has made. At the end of the unraveling, you can see the older, enlightened, and therefore empowered self, pulling away and picking up the flowers.” 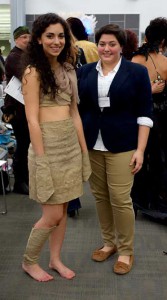 In Transition after Refuse by Elliott DeLine (burlap and chiffon) by Hailey Faucheaux, worn by School of Art student Joelle Ferrara, tells the story of a 22-year-old, pre-op FTM transgendered college student. Hailey wrote, “the themes I grasped from this story are discomfort and vulnerability—the struggle of being self-conscious in your own skin, feeling unsafe and awkward in your body and your label. The cocoon is a reminder that we outgrow our insecurities; suffering is temporary as we transition into new skin.” 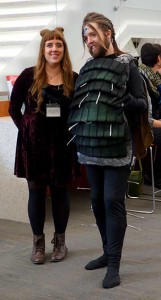 Grace Simonson and her model, Robert, in The Metamorphosis

Grace Simonson’s work, The Metamorphosis (foam, worbla, wire, and fabric), worn by her boyfriend, Robert, was based on Franz Kafka’s famous novel. “I connected to my subject the inner collision of opposing worlds, human and insect, protected by a hard shell,” wrote Grace, “forcing him to be anything but comfortable.”

All four students were proud to have their work featured in Uncommon Thread and to bring wearable literature to the catwalk in this year’s well-attended, popular community event.