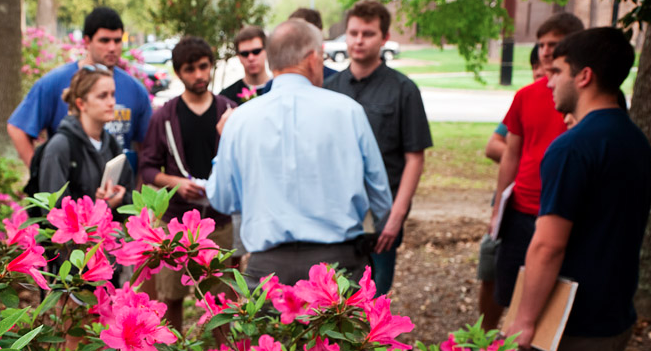 The practice involves research and investigation of existing social, ecological and geological conditions and processes in the landscape, and the design of interventions that will produce the desired outcome. Concepts in the field include urban planning and design, site planning, environmental restoration, development of parks and recreation, and environmentally conscious infrastructure planning and development.

Within the past 20 years, the profession of landscape architecture has seen a tremendous increase not only in visibility, but in the realm of educational as well. LSU’s Robert Reich School of Landscape Architecture continues to be a leader in the industry, through its efforts in education and community involvement.

Employment of landscape architects is expected to increase by 20 percent during the 2008–18 decade, bureau statistics show, which is much faster than the average for all occupations. Employment is forecast to grow as the planning and development of new construction, together with the continued redevelopment of existing buildings, creates more opportunities for landscape architects.

Van Cox, current interim director of the Reich School and a professor in the school for more than 35 years, said that the work of landscape architects can be seen practically everywhere.

“It’s found in multiple urban spaces, housing communities and many other places where people work, play and live every day,” he said. “The more we do, the more people see what we do and the more they want to have it done.”

Cox said he feels that renewed interest in environmental issues as they pertain to quality of life is partially responsible for the current boom in landscape architecture.

“There was a brief spurt back in the 1970s when our enrollment went up to 276 people, and we only have maybe 200 now, at most,” he said. “Back then, there was the big Earth Day movement. But as time went on, it was dropped as a fad. Now, due to the interest of not only the environmentally aware activist, but now the everyday citizen and federal government is cleaning up the environment in general, and you’re seeing a renewal of interest. From our standpoint, specifically, the visual environment is certainly a primary concern.”

Read more of this story on the LSU Gold site: http://www.lsu.edu/departments/gold/2012/03/reich.shtml