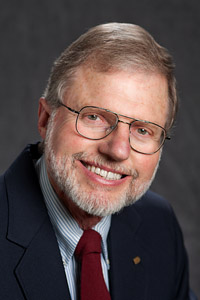 LSU’s Robert Reich School of Landscape Architecture recently announced the publication of a new book by one of its faculty members that recounts the birth of the profession of landscape architecture in Louisiana.

The publication was announced March 1 at the inaugural lecture of the Max Z. Conrad Lecture Series, held in the LSU Design Building’s auditorium. The event’s speaker was Charles Waldheim, head of the Department of Landscape Architecture at Harvard University.

In the late 1950s, Conrad – a native of New Orleans and a recent transfer student to LSU at the time – stumbled into the office of Robert S. Reich, who had come to LSU in 1941 and was then teaching in the Horticulture Department. “Doc,” as he came to be known, was beginning a new program in landscape architecture, and Conrad soon became one of the first students. After graduating from LSU, Conrad received a graduate degree in landscape architecture from Harvard University before traveling and returning to LSU in the early 1960s to teach in Reich’s growing program which, by then, offered an accredited professional degree.

At this time the profession of landscape architecture was relatively unknown in Louisiana, but soon, in a remarkable series of events, graduates of LSU’s fledgling program began getting work, first in Baton Rouge and later in New Orleans. It is from these early projects that the profession grew in Louisiana and gained public recognition.

Today, LSU’s Robert Reich School of Landscape Architecture is consistently ranked as one the nation’s best programs, and its alumni are professional leaders with practices throughout the world.

“Until now, the story of how the profession grew was mainly anecdotal and undocumented,” said Van Cox, professor and interim director of the school. “We professionals all knew Max played an influential role, but we didn’t know the details. With his account, that story is now told.”

The Max Z. Conrad Lecture Series, funded by contributions from alumni, will annually bring in leading professionals to talk about their work and its place in the contemporary practice of landscape architecture.

“Landscape Architecture and New Orleans: Room for Only One?” is available from LSU’s Robert Reich School of Landscape Architecture for $20 per copy, or $25 per mailed copy. For additional information on the school and the Max Z. Conrad Lecture Series, or to purchase a copy of the book, contact the school at 225-578-1434, visit http://landscape.lsu.edu or contact Van Cox at 225-578-1478 or vcox1@lsu.edu.