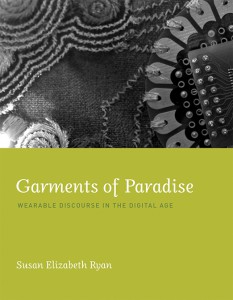 Susan Elizabeth Ryan’s book, Garments of Paradise: Wearable Discourse in the Digital Age, was published by MIT Press in June 2014. Ryan is a professor of contemporary and new media art history and theory at the LSU School of Art. She is also an affiliate of the LSU Center for Computational Technology, where she is a member of the Cultural Computing group.

In Garments of Paradise, Ryan applies historical and critical analysis to wearable technologies in order to frame a perspective on where they have come from, how they are developing, and what is at stake. Her study moves from computer labs to runways and city streets as she considers a broad assortment of electronic and digital phenomena under the lens of dress. As she writes, “Wearable technologies must be wearable, after all, and they draw meaning from their contexts in science fiction and popular culture, clothing and fashion, and social visions and ideologies of body display.”

Garments of Paradise considers nearly two centuries of wearable technology, from early advancements by the military during World War II to wearable devices for physical enhancement and personal display developed in the last 30 years.

Wearable technology—whether a Walkman in the 1970s, an LED-illuminated gown in the 2000s, or Google Glass today—makes the wearer visible in a technologically literate environment. Twenty years ago, wearable technology reflected cultural preoccupations with cyborgs and augmented reality; today, it reflects our newer needs for mobility and connectedness. In Garments of Paradise, Ryan examines wearable technology as an evolving set of ideas and their contexts, always with an eye on actual wearables—on clothing, dress, and the histories and social relations they represent. She proposes that wearable technologies comprise a pragmatics of enhanced communication in a social landscape. “Garments of paradise” is a reference to wearable technology’s promise of physical and mental enhancements.

Ryan defines “dress acts”—hybrid acts of communication in which the behavior of wearing is bound up with the materiality of garments and devices—and focuses on the use of digital technology as part of such systems of meaning. She connects the ideas of dress and technology historically, in terms of major discourses of art and culture, and in terms of mass media and media culture, citing such thinkers as Giorgio Agamben, Manuel De Landa, and Gilles Deleuze and Félix Guattari. She examines the early history of wearable technology as it emerged in research labs, the impact of ubiquitous and affective approaches to computing, interaction design, and the influence of open source ideology. Finally, she considers the future, as wearing technologies becomes an increasingly naturalized aspect of our everyday lives.

Visit susanelizabethryan.com or mitpress.mit.edu/9780262027441 for more information about Garments of Paradise.

Read a review of Garments of Paradise on io9.

Praise for Garments of Paradise

“Garments of Paradise gives an impressive overview of wearable technology as an evolving set of ideas within a range of historical and social contexts. Susan Elizabeth Ryan investigates wearables as part of a complex language of dress that has always involved technology and establishes a critical context by drawing on the writings of theorists and philosophers. The book makes an invaluable contribution to shaping the discourse on wearable technologies as a cultural phenomenon embedded in social behavior, communication, and display.”