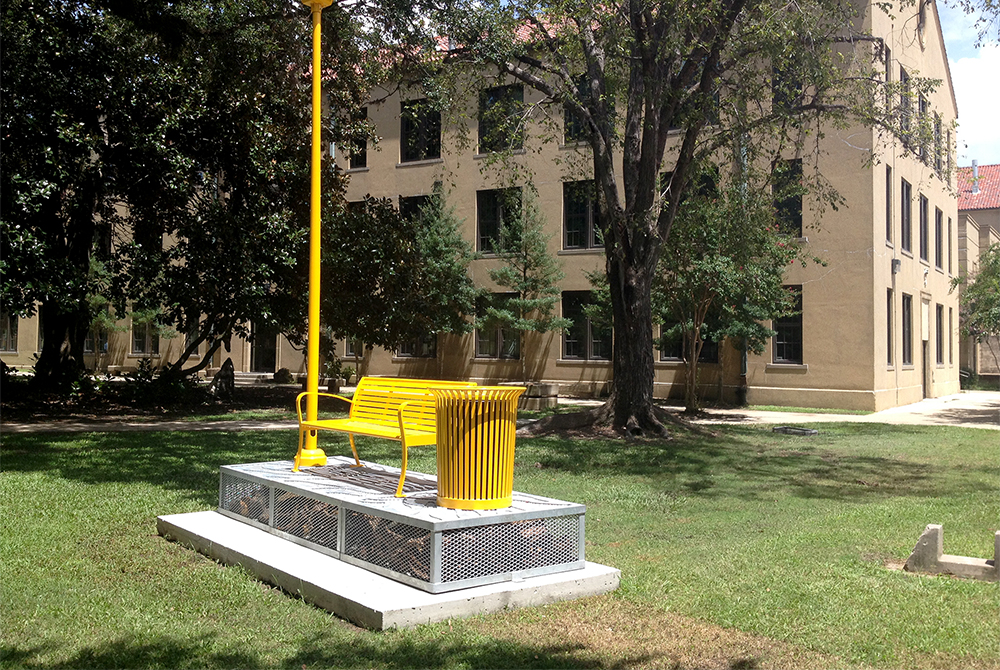 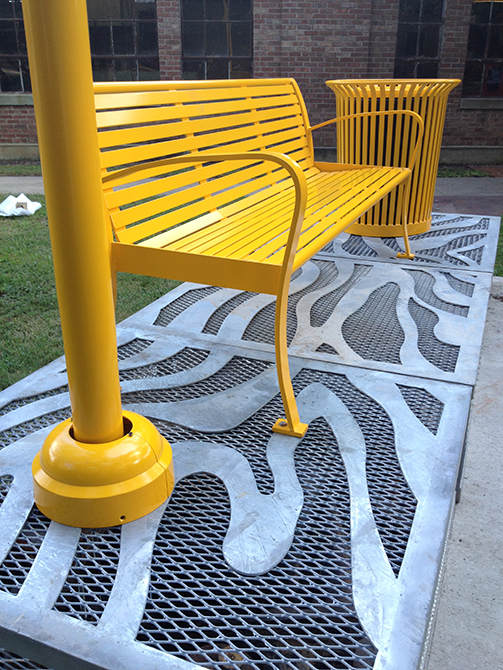 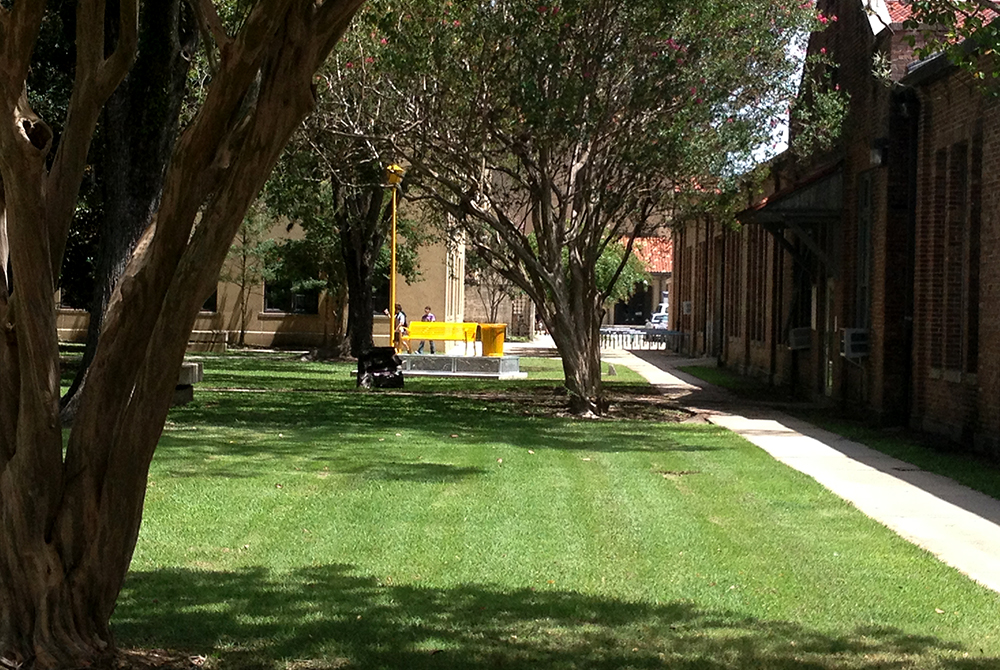 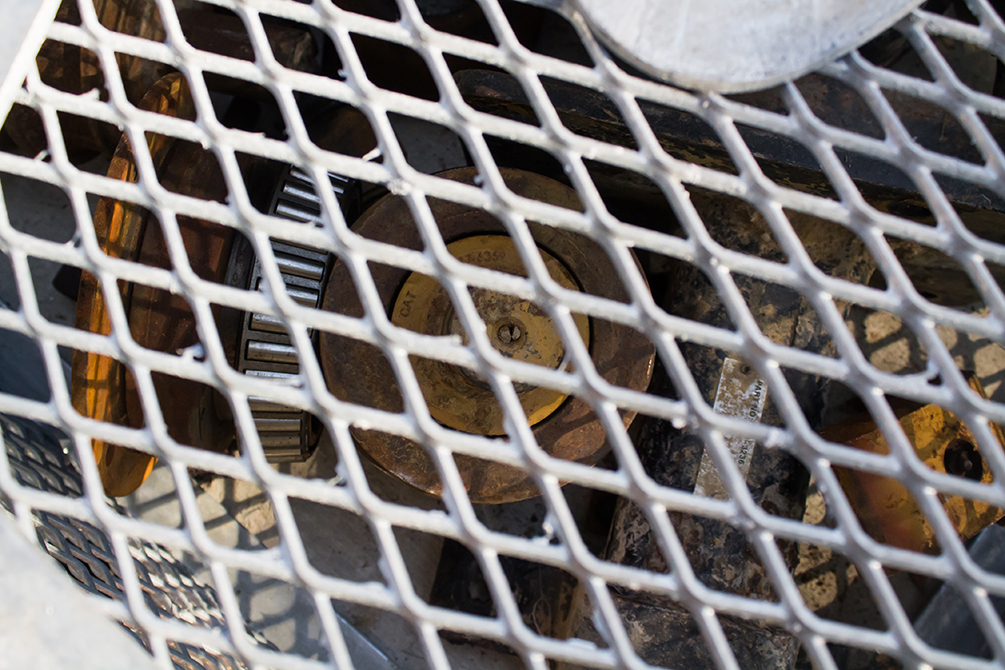 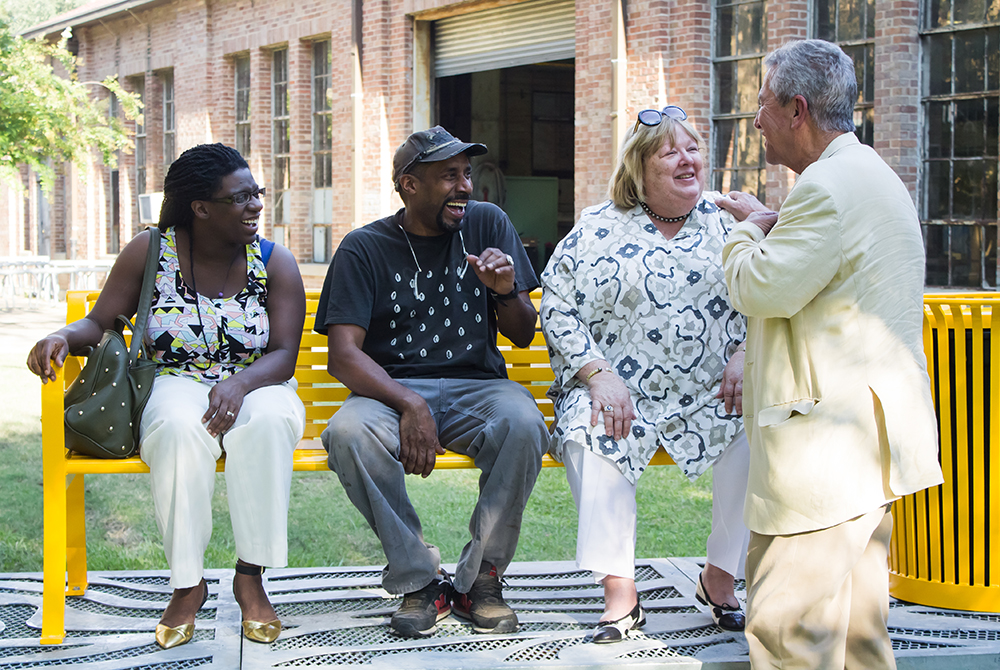 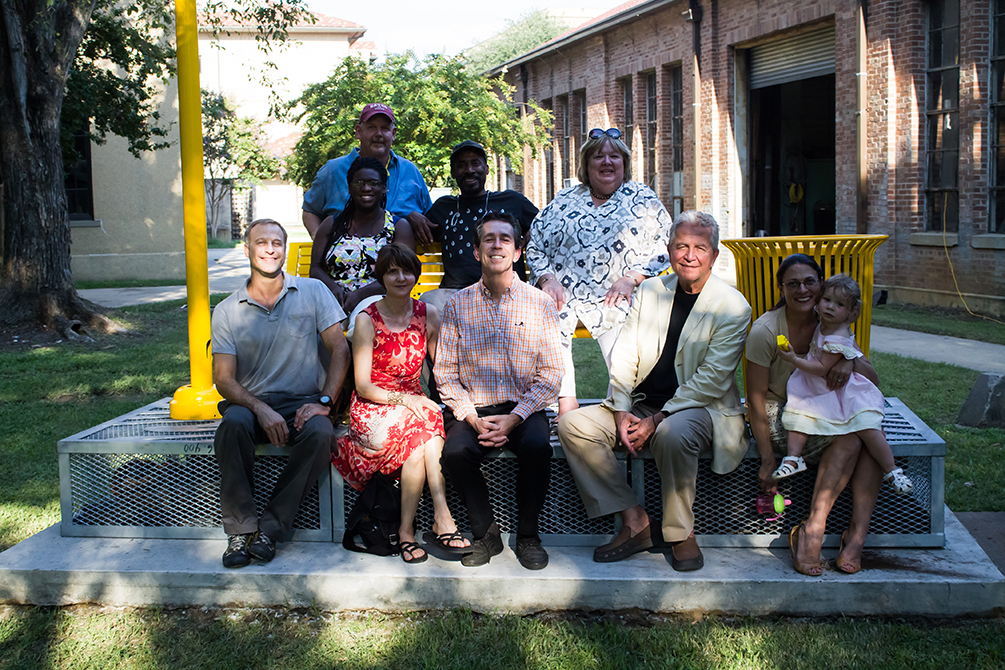 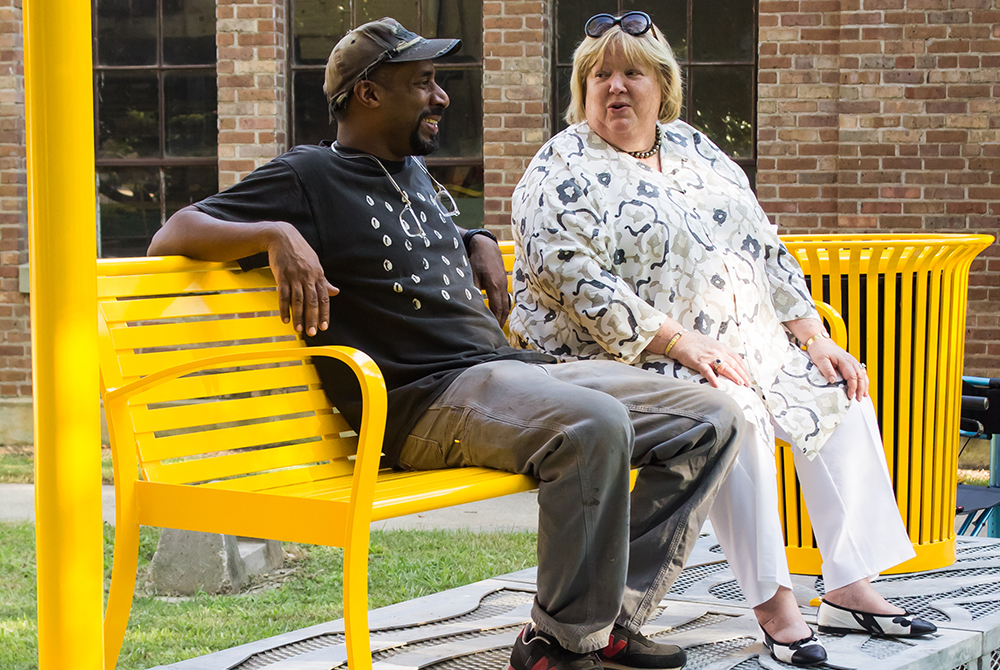 On August 14, New York artist Nari Ward, the 2013–14 LSU College of Art & Design Nadine Carter Russell Chair, unveiled a sculpture he completed during his residency at the LSU School of Art. Named Msssspp Runoff, the piece will remain a permanent installation in the LSU Sculpture Park.

The sculpture was constructed of found objects from the Louisiana Machinery “Caterpillar graveyard” and refuse discovered at LSU Landscape Services. The bench/trashcan/lamppost combination is a repeated feature along the banks of the Mississippi River in downtown Baton Rouge. Ward’s installation juxtaposes the uncontrollable nature of the roiling Mississippi River against the peacefulness of sitting and contemplating. However, some argue that the Caterpillar yellow paint color is reminiscent of LSU gold, and the metal-worked river pattern on the base of the sculpture recalls the university mascot’s tiger stripes. No matter how one perceives the artwork, the sculpture is a fitting and welcome addition to the permanent sculpture collection at LSU.

Born in St. Andrews, Jamaica, Ward came to the United States as young boy and currently resides in New York, where he is an active artist and a professor at Hunter College. He is represented by one of the foremost New York art galleries, Lehmann Maupin, and his work is sold internationally to private collectors and museums. Ward recently returned to the US following a 2012–13 Rome Prize fellowship. Additionally, he has received commissions from the United Nations and World Health Organization and awards from the American Academy of Arts and Letters, the National Endowment for the Arts, the New York Foundation for the Arts, the John Simon Guggenheim Foundation, and the Pollock Krasner Foundation. A master at balancing elegance with grittiness, Ward articulates multilayered issues that affect all communities—economics, poverty, race, culture—and how these factors shape a society.

During his residency at LSU, Ward created several pieces for the exhibition at the LSU Museum of Art, Rooted Communities: The Art of Nari Ward, which will remain on display through January 2015. He also worked with students in Associate Professor Malcolm McClay’s advanced sculpture studio, and he presented a lecture at the LSU College of Art & Design, “The Laying on of Hands: Marking Place and Time.” (View past lectures at design.lsu.edu.) Currently, Ward is creating a piece for the Sugar Hill Children’s Museum of Art and Storytelling, a Broadway Housing Communities project in Harlem. He also plans to create a sister sculpture for Msssspp Runoff to be installed in New York at a location to be determined.

For more information about Nari Ward’s residency at LSU, read the feature article, “Shifting Gears: From New York to Baton Rouge,” in the summer 2014 issue of Quad: The LSU College of Art & Design Alumni Magazine.