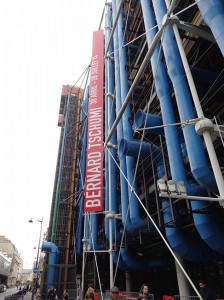 Robert Holton, assistant professor at the LSU School of Architecture, was invited to attend the opening of the Bernard Tschumi exhibition at the Pompidou Center in Paris this April. Presenting nearly 300 original works—many of which have never been seen before—the exhibition runs through July 28, 2014, and represents the first major retrospective in France of the work of architect and theorist Bernard Tschumi.

Along with being a world-renowned architect, Tschumi served as dean of Columbia University Graduate School of Architecture and Planning, where he contributed to the education of a generation of architects—including School of Architecture Director Jori Erdman, Professor Ursula Emery McClure, and Holton, who also worked at Bernard Tschumi Architects in New York and Paris from 1998 to 2003.

The opportunity to attend the inauguration of the Bernard Tschumi exposition at the Pompidou Center in Paris offered the LSU School of Architecture international exposure. The opening was attended by architects and architectural educators influential on an international scale, and Holton’s attendance offered LSU an invaluable opportunity to make new connections toward future projects and events.

“Being a graduate of Columbia University under Bernard Tschumi’s direction and having worked in his office in both New York and Paris, the invitation to the opening was a special honor. As a professor at the LSU School of Architecture, it is personally important that I share my varied experiences of working with and being taught by some of the best and most influential design professionals in the world. It is this emersion in design culture and the creative process that inspires my teaching,” said Holton.

Projects Holton contributed to while at Bernard Tschumi Architects (many of which were featured in the exhibit) included the Lindner Athletic Center in Cincinnati, Ohio; the Florida International University Architecture School in Miami; the Zenith concert hall in Limoge, France; the New Acropolis Museum in Athens, Greece; the MAC contemporary art museum in Sao Paolo, Brazil; and the Vacheron-Constantin watch factory in Geneva, Switzerland. Holton’s work at Bernard Tschumi Architects has been featured in Architectural Record, L’Architecture d’Aujourd’hui, Domus, and more.

Holton joined the architecture faculty at LSU in fall 2013. He teaches third-, and fifth-year studios as well as seminars on architectural design, technology, and techniques. The LSU School of Architecture helped support Holton’s travel to Paris with funds provided by supporters of the School.

“We are very grateful to have the continued support of alumni and friends of the School of Architecture for this kind of faculty endeavor. This was a unique opportunity for Robert to attend the opening of an exhibit that included projects he was an integral part of during his time at Tschumi’s office. Robert’s professional connections and experience are a critical part of the future of the School of Architecture and will continue to benefit our students in the coming years. We are very fortunate to have such a prolific faculty who bring so many opportunities to share the work and research of the LSU community,” said Director Erdman.

Visit centrepompidou.fr for more information about the Bernard Tschumi exhibition at the Pompidou Center in Paris.

More about Robert Holton
Robert Holton earned a Bachelor of Science in interior design from the University of North Carolina at Greensboro and a Master of Architecture from Columbia University. He has previously taught at Virginia Tech University, Florida International University, Pratt Institute, and Columbia University. Holton has worked with several prominent architectural offices in the U.S. and France that include: Bernard Tschumi Architects in New York and Paris; Smith-Miller+Hawkinson, Gensler, Peter Marino Architect and Peter Gluck Architect in New York; and Oppenheim Architects and Design GH in Miami. His professional experience spans a variety of project types and scales and includes the Corning Glass Center, University of Cincinnati Athletic Center, and office buildings for Mastercard International. Additionally, he has worked on winning proposals in Europe, such as the New Acropolis Museum in Athens, Greece, and concert halls in both Rouen and Limoges, France.

About LSU School of Architecture
LSU School of Architecture students develop a solid foundation of traditional design, hand building, and drawing skills and learn to use computer and technological resources. The architecture program at LSU provides a balance between broadening educational experiences and discipline-focused coursework. In addition to learning how to make buildings, students develop a sense of professionalism and leadership in shaping the world by learning how to see, think, and act creatively. For more information, visit architecture.lsu.edu.