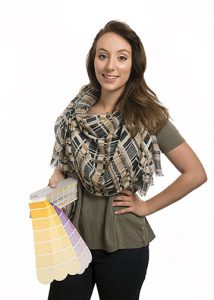 Katharina Beliveau, a fourth-year student in the LSU School of Interior Design, is busy: busy preparing her capstone project before graduating in December; as a member of the Louisiana Army National Guard; as a sorority member of Delta Gamma; and, as an army qualified linguist, she works as a translator for the military and for individual companies on the side.

Katharina came to LSU from New Hampshire on a scholarship for band. During her first year, she played tuba for the Golden Band from Tiger Land and got to march in the St. Patrick’s Day parade in Dublin.

“I was one of only four girls in the 31-person tuba section,” she recalled.

For much of her childhood, Katharina lived abroad. Her father met her mother, a German native, while he was in the U.S. Army. Later, the family was stationed in Mannheim, Germany, for seven years. Katharina said her experience living outside of the United States helped her choose her major and, to this day, informs her design work.

Initially, Katharina thought she wanted to major in journalism, but within the first year of study, she realized it wasn’t the right fit.

“I was racking my brain trying to figure out what I should do instead when my roommate pointed out it was pretty obvious—I would spend my spare time looking at houses and saying how I would change them. So I looked up interior design at LSU and spoke with Instructor John Campbell. Then I looked back on my time in Germany, at how clean, concise, and efficient everything was, and I imagined being a part of that.”

Katharina changed her major to interior design and never looked back—even though it meant she had to give up band due to scheduling conflicts with her design studios.

Now, in her final year of study at LSU, Katharina is working on her senior capstone project, a semester-long assignment that requires students to accumulate everything they’ve learned in the past four years. This year, students were encouraged to incorporate universal design principles in their final projects. Visiting scholar Edward Steinfeld, professor, architect, gerontologist, and the 2016–17 Nadine Carter Russell Chair in Interior Design, is an expert in this field and is working with students throughout the semester to increase their knowledge of inclusive design. Katharina’s volunteer work with Delta Gamma also played a role in helping her select a focus for her capstone project. Every week, Delta Gamma visits the Louisiana School for the Visually Impaired, participating in activities and forging relationships with the children there.

“You realize the limitations of the blind and how universal design and interior design can make their lives easier,” noted Katharina.

Her capstone project was also inspired by a documentary on boarding schools that she viewed on a German news station. “The documentary emphasized the interweaving of staff, teachers, and students—their family-like relationships and high amount of active time spent outdoors,” she recalled. “For my capstone project, I chose to apply that concept, also incorporating meditation and counseling, to the American foster care system.”

Katharina’s project proposes an alternative education solution for foster children; “think boarding school meets home schooling,” she explained. “Typically, foster children end up being forced to move every six to eight months, which takes an immense toll on their education; 75 percent of foster care children function below their current grade level and only two percent ever attain a bachelor’s degree. By creating a school that eliminates the stress of constantly being moved, interior design can create a better learning environment for those in foster care.”

Interior design seniors will present their final projects to a jury of professionals and peers at the end of the semester. Katharina said she remains interested in residential design and wants to move to Los Angeles after she completes her military training. When asked what drives her the most, Katharina said it’s the word no.

“Never take no for an answer; there’s always a way around it. I was told I couldn’t get a band scholarship playing tuba. I was told I wouldn’t be able to afford tuition at an out-of-state university. Every time someone says no, it’s like a challenge to me.”