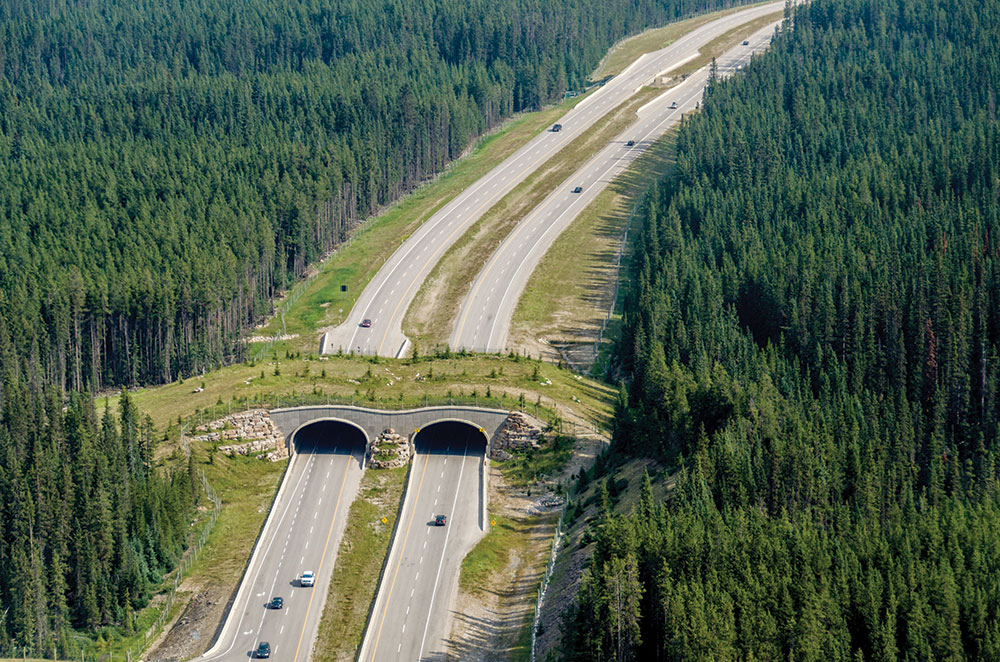 The Louisiana black bear once roamed freely throughout the state. Today, only three core subpopulations endure, each plagued by habitat fragmentation. Disconnected from the other populations by Highway 90, the coastal subspecies, the closest hereditary strain to the original Louisiana black bear, is suffering from overpopulation. Unable to reach adequate resources, bears often wander into residential areas to scavenge easily accessible garbage and, too often, these foraging attempts lead them to their death. According to the Louisiana Department of Wildlife & Fisheries (LDWF), 68 Louisiana black bears have been killed in bear-vehicle collisions along a stretch of Highway 90 in St. Mary Parish since 1992.

In fall 2015, LSU Robert Reich School of Landscape Architecture students had the opportunity to approach the habitat fragmentation problem from the perspective of landscape architecture. Kenny Ribbeck, biologist in the wildlife division of LDWF, approached LSU landscape architecture professor Forbes Lipschitz about researching the potential and feasibility of constructing a wildlife crossing over Highway 90 to reduce the number of collisions and improve connectivity among the species.

Lipschitz incorporated the project into her third-year undergraduate landscape design studio (LA 3001), tasking students to create a network of crossing infrastructure. The students were instructed to design the crossing and fencing and vegetation strategies and to develop a campaign to promote the project to the public.

“Creating crossing infrastructure to restore habitat connectivity requires coordinated interventions across multiple sectors at multiple scales,” said Lipschitz. “How can design facilitate decision making when conservationists, politicians, and community members have different values and interests and don’t always speak the same language? I believe that landscape architects are uniquely suited to answer this call. That we are economic, social, urban, and environmental generalists affords us a broad macro-level knowledge base with which to approach the problem.”

Lister and Guth helped Lipschitz connect with other leading experts in wildlife crossing structures, including Dr. Tony Clevenger, a senior wildlife research scientist who specializes in identifying the effects of highways and other barriers on wildlife connectivity, and famed conservationist and photographer Harvey Locke, cofounder and strategic advisor to the Yellowstone to Yukon Conservation Initiative. A native of the Calgary-Banff area of Canada, Locke is globally known for his work on wilderness, national parks, and large landscape conservation. 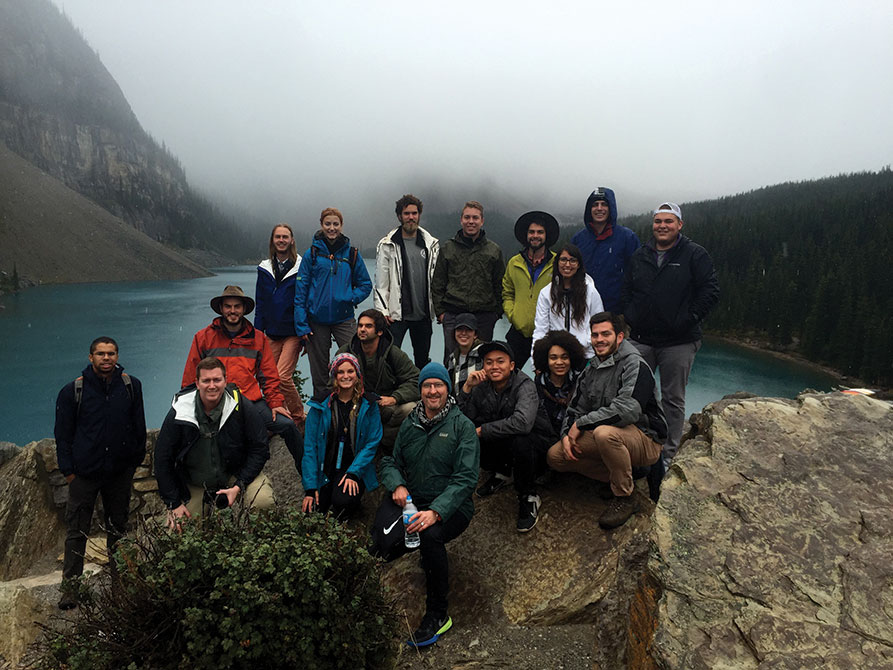 The entire Bachelor of Landscape Class of 2018, with Professors Risk and Lipschitz, at Lake Moraine in Banff National Park. The students spent 10 days in Alberta, British Columbia, where they viewed one of the best testing sites of innovative roadway mitigation/wildlife passages in the world. (Image courtesy of Delaney McGuinness)

The studio spent 10 days touring Alberta, British Columbia. They visited Banff National Park, one of the best testing sites of innovative roadway mitigation/wildlife passages in the world. Currently, there are 44 safe-passage structures for wildlife along the 83 kilometers of the Trans-Canada Highway in Banff National Park. Scientists have collected more than 15 years of data on wildlife using the crossing structures along the highway—from salamanders, frogs, squirrels, and weasels to coyotes, wolverines, lynx, bighorn sheep, and grizzly bears. In Banff, the students met with Locke, Clevenger, and more leading experts, and they got to view dozens of wildlife crossing strategies firsthand.

Bachelor of Landscape Architecture candidate Benton Williams, a native of Baton Rouge, noted four particular structures in use at the park: a large overpass spanning the highway; a box culvert underpass that most drivers wouldn’t even notice; an aquatic underpass built for salamanders; and a retrofitted highway underpass that encourages animals to cross under, instead of on, the highway by adding strategic fencing to the existing structure. 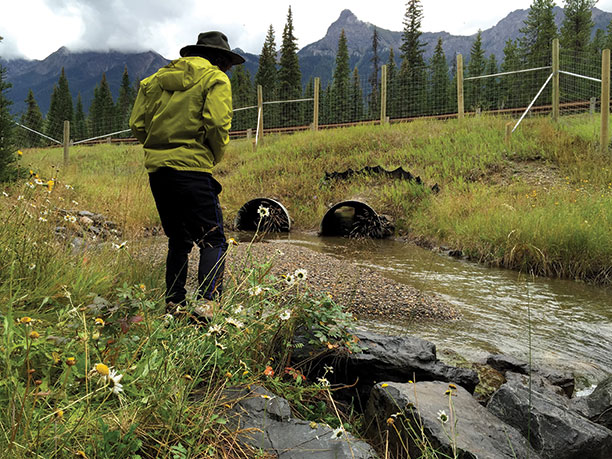 This aquatic underpass was built for salamanders, which require the stream for their life evolution processes. (Image courtesy of Benton Williams)

After they returned from the field trip to Banff, the students were divided into groups of three to work on their crossing infrastructures for the black bear.

“We came back and started trying to implement their strategies in the Atchafalaya, a vastly different demographic and landscape,” shared Delaney McGuinness, BLA candidate from New Orleans. “The biggest differences were in elevation and the water table.”

The students participated in a design charrette with Lister, Guth, and LDWF’s black bear specialist, Maria Davidson. They visited neighborhoods in St. Mary Parish to learn more about problems the bears face due to habitat fragmentation and to get a feel for the local population’s attitude toward the species, which was “surprising,” according to third-year BLA candidate Daniel Hernandez of St. Amant, Louisiana.

“In Canada, you can see how everyone coexisted with the wildlife,” explained Hernandez. “We do that to a certain extent, but only with the animals we like or the ones we can hunt.” (Even though the Louisiana black bear was removed from the threatened species list in March 2016, the species remains protected from hunting by state laws.) “The relationship—regardless of how dangerous the animal is—is just different here in Louisiana,” continued Hernandez. “We have different priorities. We had to approach the same problem from a completely different social perspective.”

The student groups worked on the project at a variety of scales, and each group developed a narrative, or theme, to use to present their ideas. Some students developed a larger framework throughout the Atchafalaya region. Others focused on the sugar industry—how might we create more bear friendly sugar? One group came up with lower cost solutions for retrofitting existing structures. Another created a campaign to use Louisiana’s many festivals as a promotional platform. 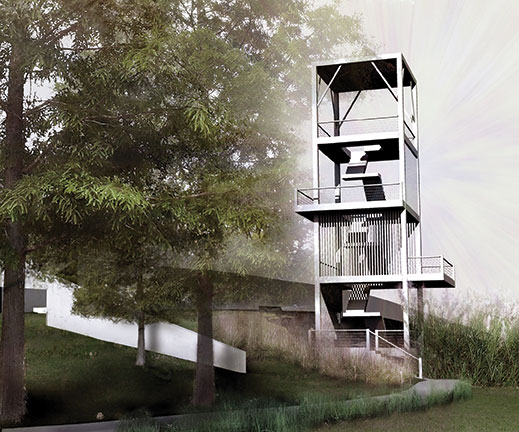 The crossing structure designed by Hernandez, McGuinness, and Williams is designed to be as inconspicuous as possible to bears but highly detectable by humans. The group proposed the inclusion of a large, four-story observation tower to allow interested parties to conveniently pull off the highway and explore the native scenery while learning about wildlife connectivity.

Hernandez, McGuinness, and Williams’ team embraced Louisiana’s reputation as a sportsman’s paradise in their proposal titled, “The Atchafalaya Bear Authority.” They designed a crossing infrastructure that included a section of raised highway with an underpass, fencing and vegetation strategies, an observation tower to serve as an educational tourist destination, and well-marked signage to engage the public. Their campaign was focused on hunting and community engagement. Assuming the population would increase enough to allow for hunting, they proposed building a ritzy hunting lodge in St. Mary Parish and selling a number of hunting tags as an economic driver to help fund conservation efforts. They envisioned an app to engage and educate the public with incentives to coexist with the bears, such as gas discounts for uploading pictures of locked, bear-safe garbage cans.

Each student group designed a project book and presented their final results to LDWF at the end of the semester.

Sweetbear Sugar: The Use of Sugarcane Production for Wildlife Conservancy

“The studio projects encompassed ideas that captured not only the physical needs of a system that would allow this subpopulation of bears safe access across the highway deathtrap, but also the educational and awareness aspects that are equally important in the long-term management of such a species,” Ribbeck stated. “The designs included mechanisms to allow public engagement and understanding of the structures’ role in the recovery and management of this charismatic mega-fauna species, one which not many Louisianans are aware even exists within the Louisiana landscape. Insightful mechanisms were included that could also aid instead of impact commerce and development in the area while encouraging the long-term use of the project areas by the bears for their continued recovery and eventual connection with other subpopulations in the state.”

In the end, the bear-crossing project introduced students to even more areas where landscape architects can make a difference in the world.

“Just for this project alone we dabbled in wildlife ecology management, public relations, outreach, branding. We did site design. We had to look at regional processes on the human and ecology side; we had to learn people’s relationships with things that we never thought about,” said Hernandez. “It’s amazing how many different jobs you can do with the things you learn in this program.”