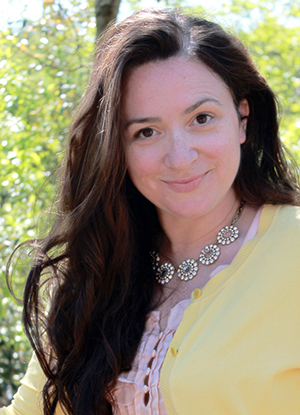 LSU interior design student Tracy Manuel is entering her senior year with a $30,000 scholarship from the Angelo Donghia Foundation and a job at Gensler, Houston, already in place. Tracy’s junior year was quite productive: she participated—and placed—in several design competitions; she was awarded a number of scholarships; she attended an award ceremony and gala in Houston and gave a speech to 250-plus attendees; she spent a week in Las Vegas attending the Hospitality Design Expo where she was presented with yet another design competition award; and she interned at Gensler’s Houston office over the summer and was offered a permanent position.

These are impressive accomplishments for anyone, but Tracy’s successes are particularly inspiring because of her unique situation as a non-traditional student. A mother of three daughters, Tracy has spent the past 16 years at home focused on rearing her children. Her youngest is entering the fifth grade; her 16-year-old is a special needs child with severe autism; and her eldest, Elaina Manuel, is studying sculpture at the LSU School of Art—mother and daughter attending the LSU College of Art & Design simultaneously, how serendipitous!

So—what inspired Tracy to return to school and to study interior design?

Tracy said she has always loved the way interior spaces transform perception and experience, and, especially as a mother of a child with special needs, how spaces affect attitude. She began her studies in interior design at Bowling Green State University before deciding to move back home to Louisiana, at which point she transferred to LSU. “The program here was so much more advanced,” she said, particularly how the School of Interior Design teaches students how to use technology and design software. “I made one of the best decisions of my life when I decided to demote myself back to a sophomore to give myself the time to learn the technology,” she added. 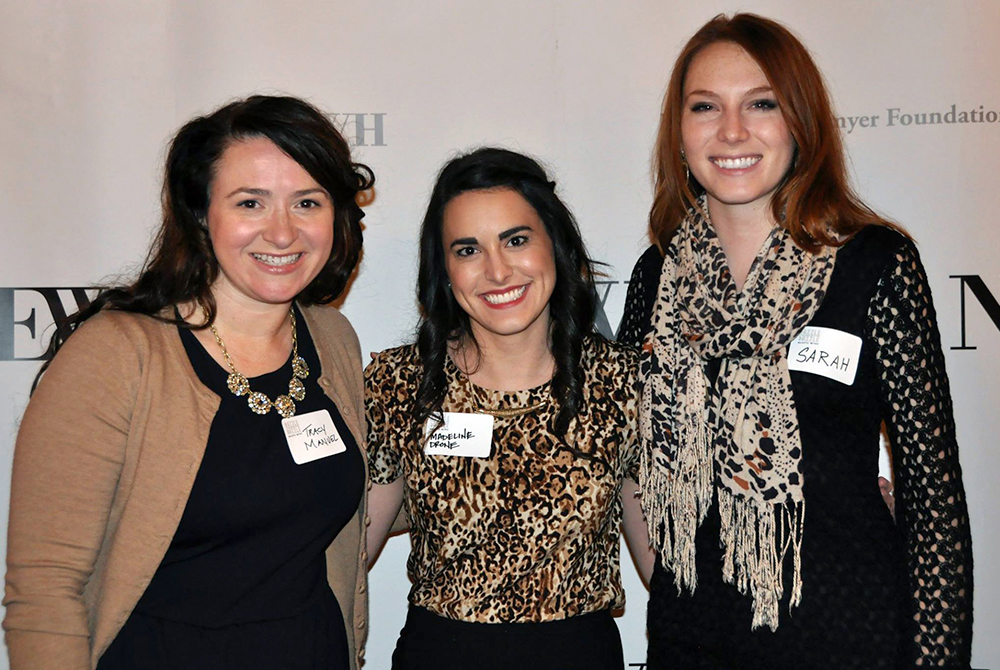 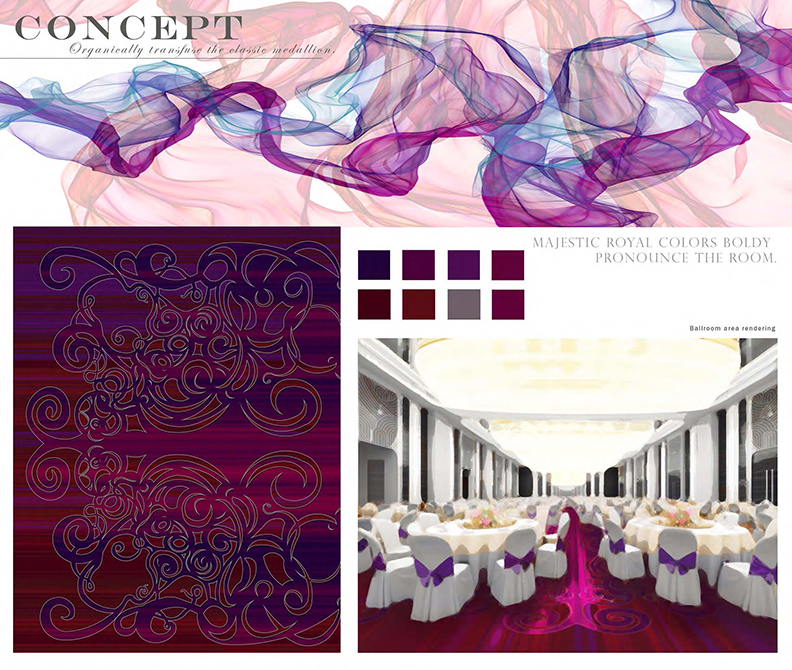 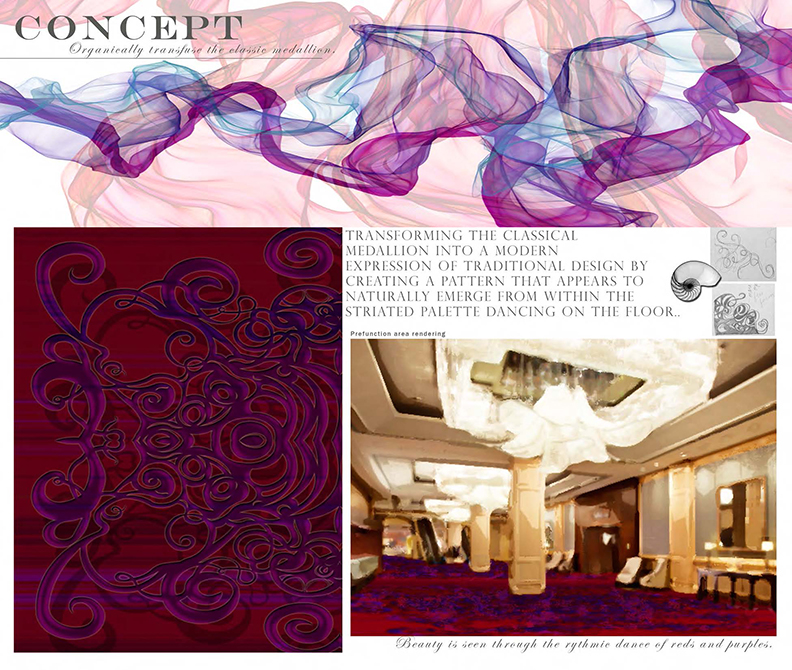 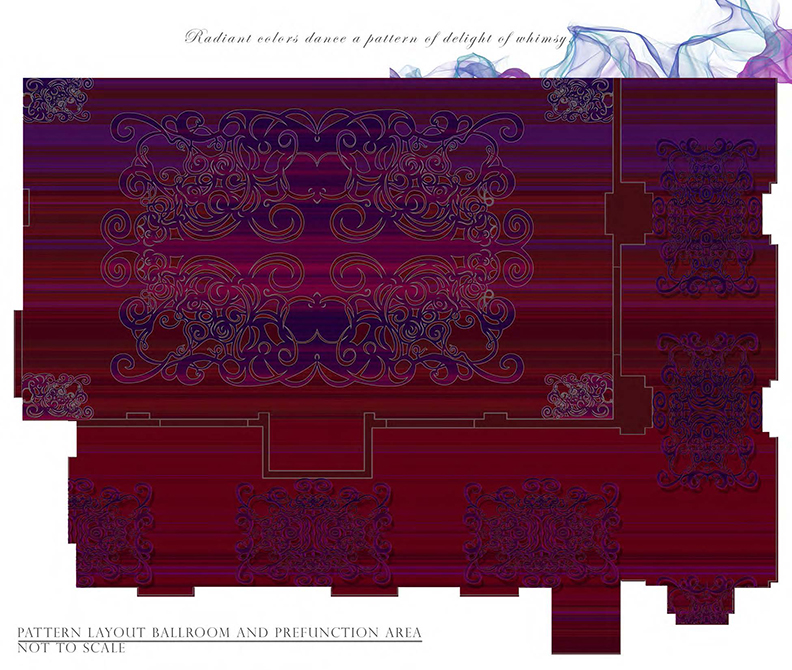 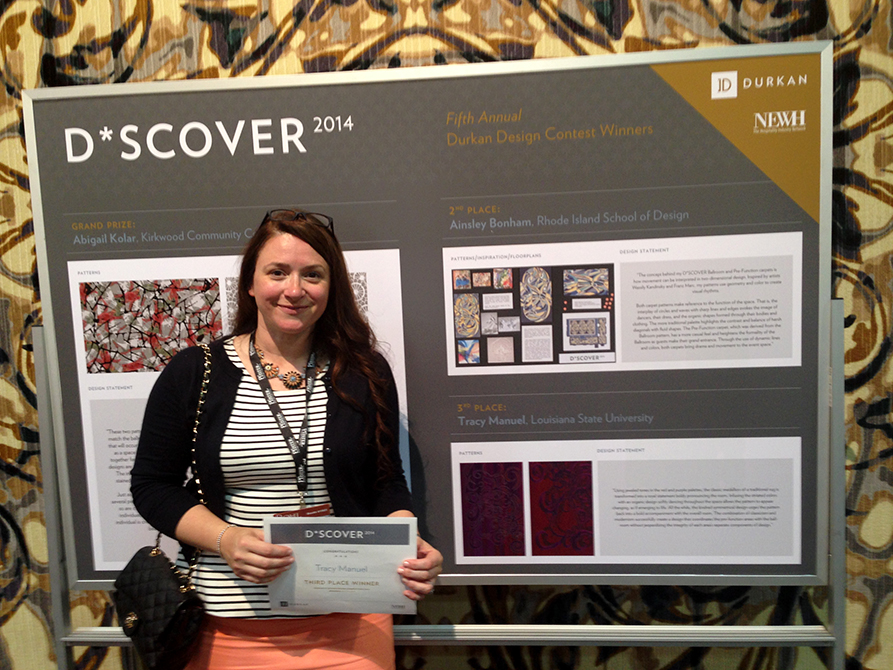 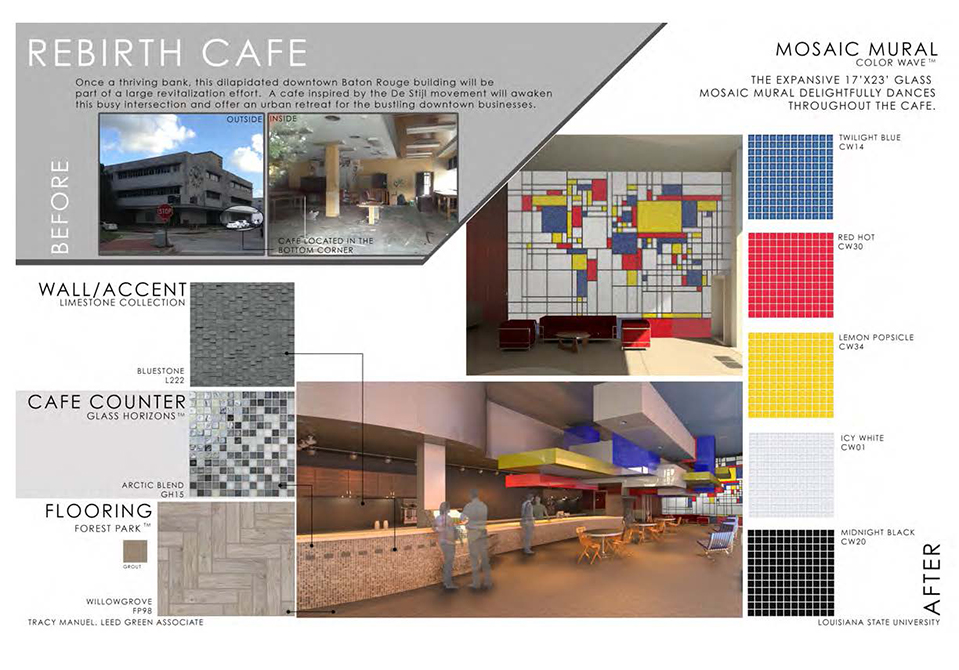 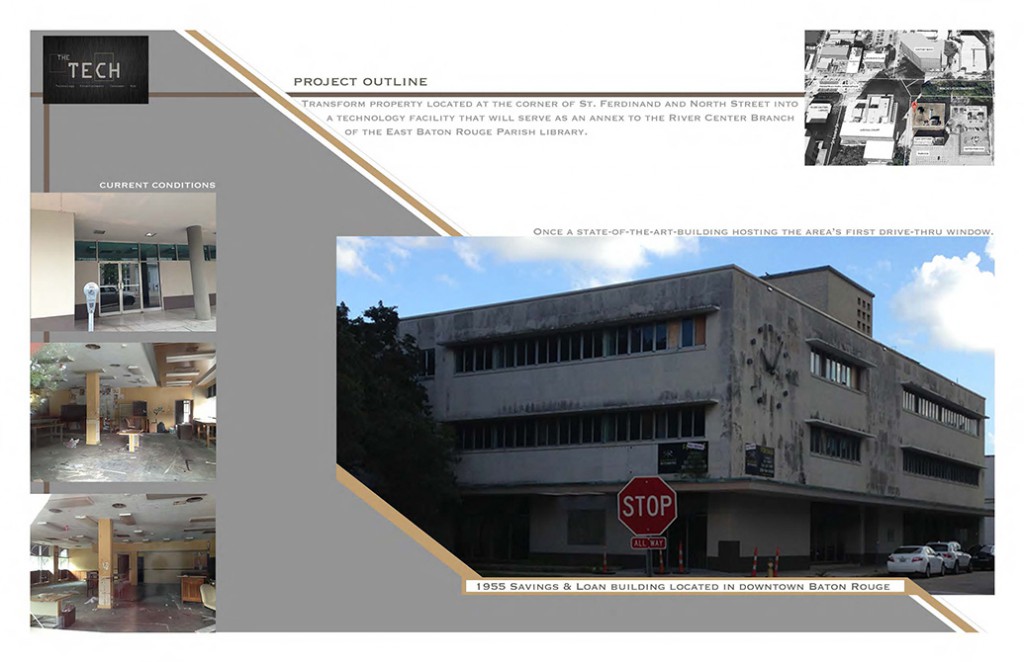 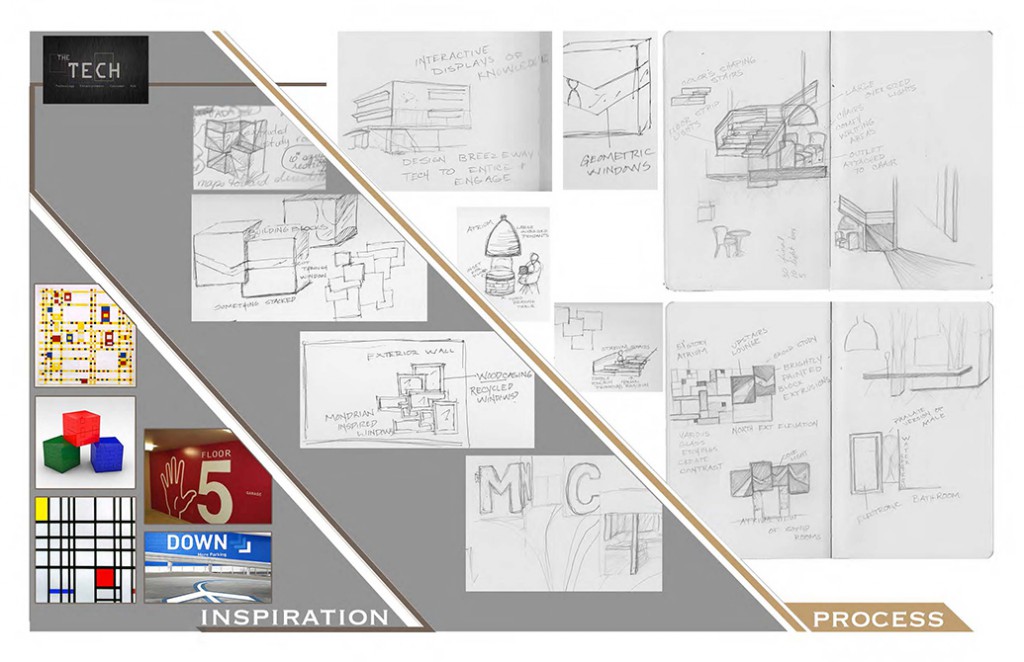 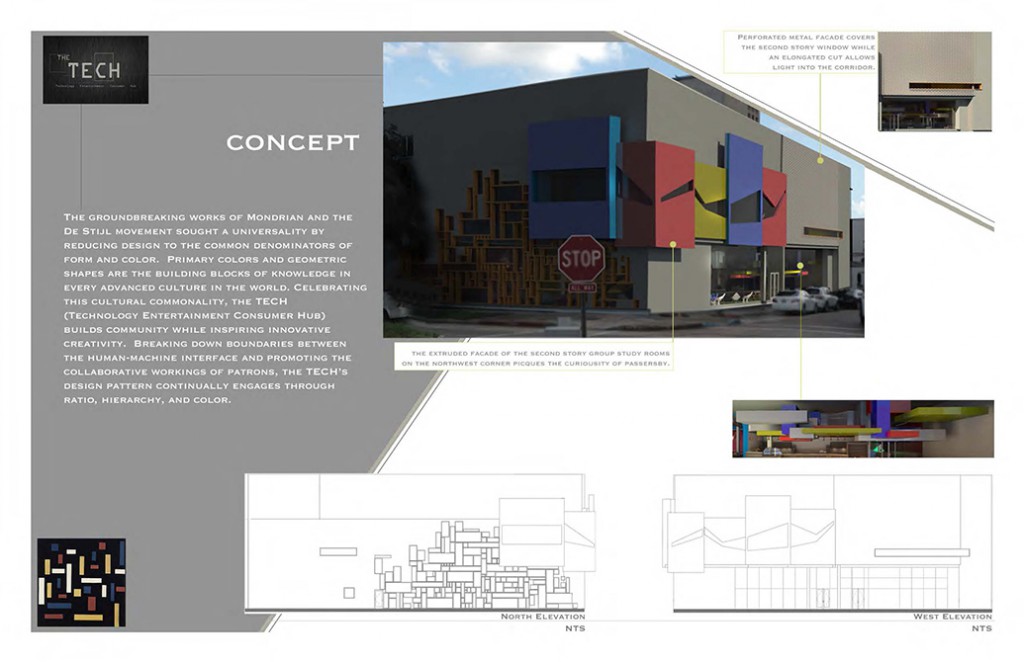 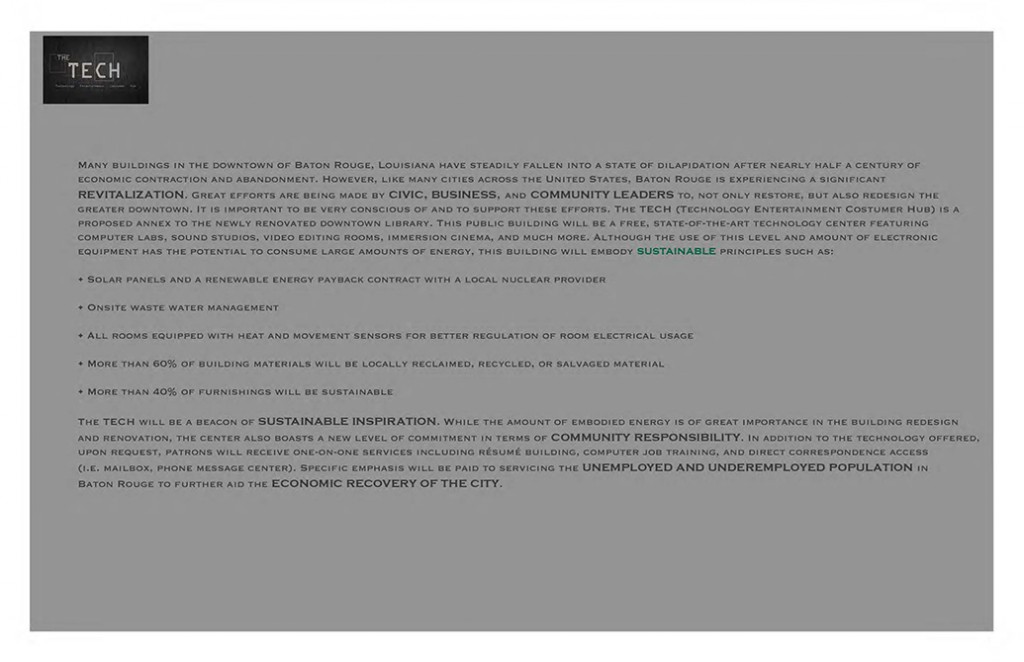 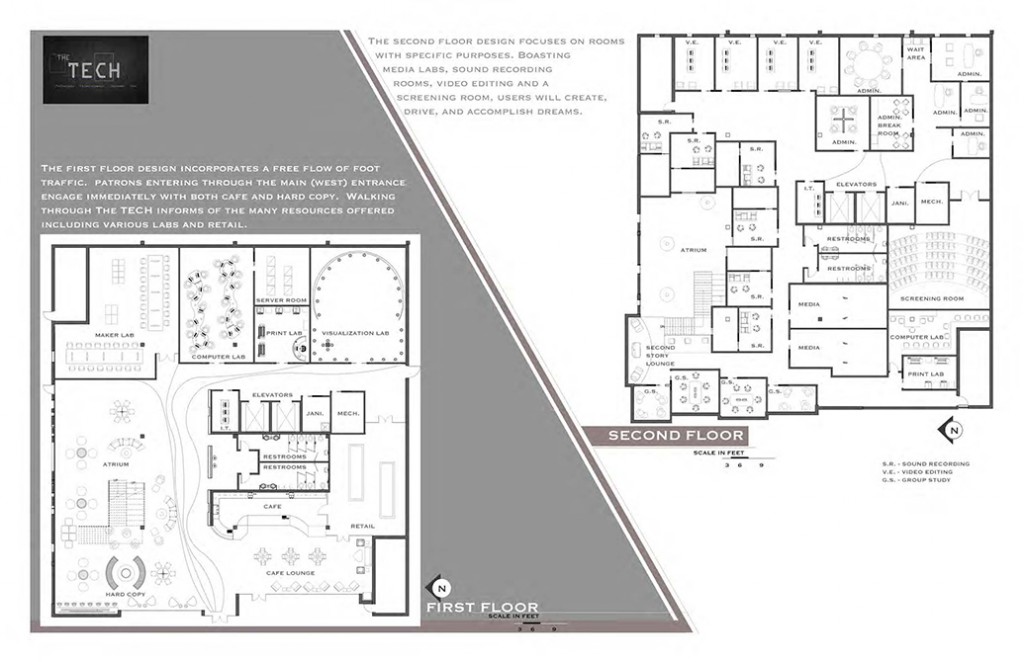 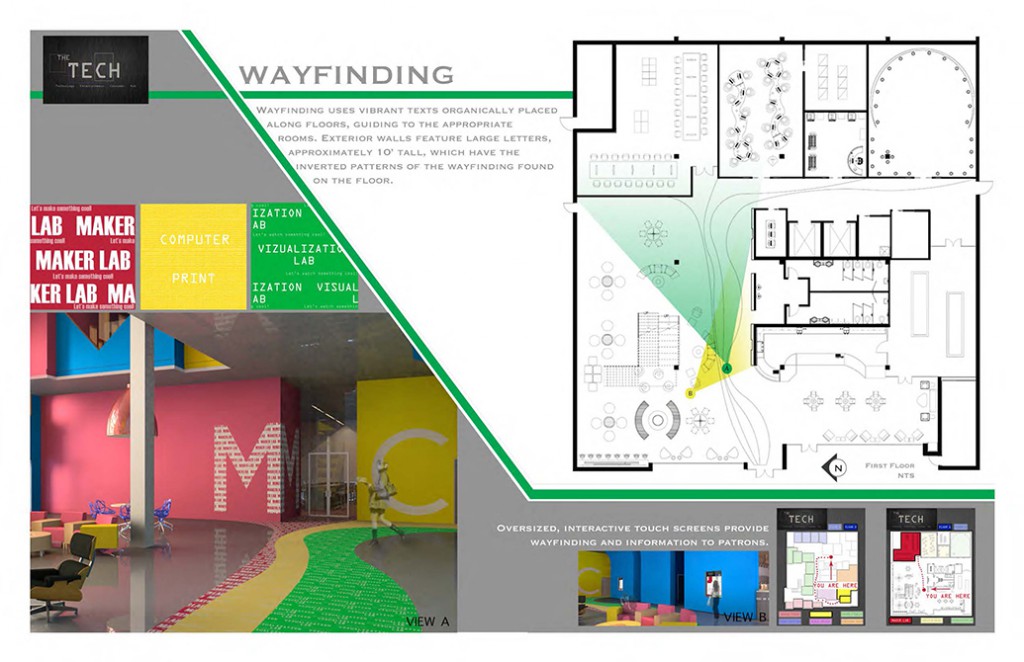 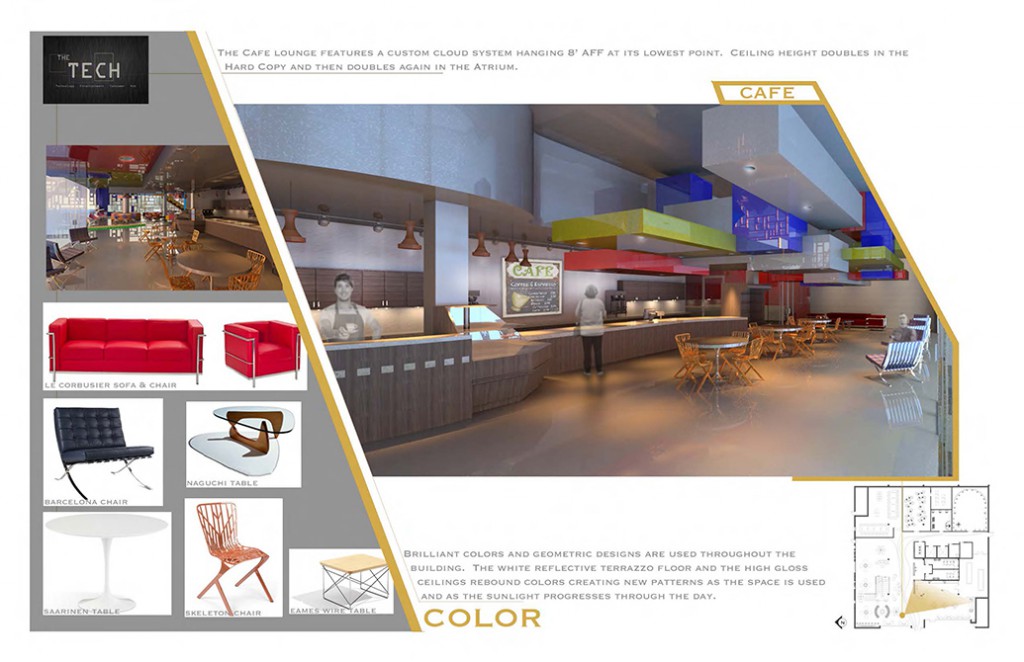 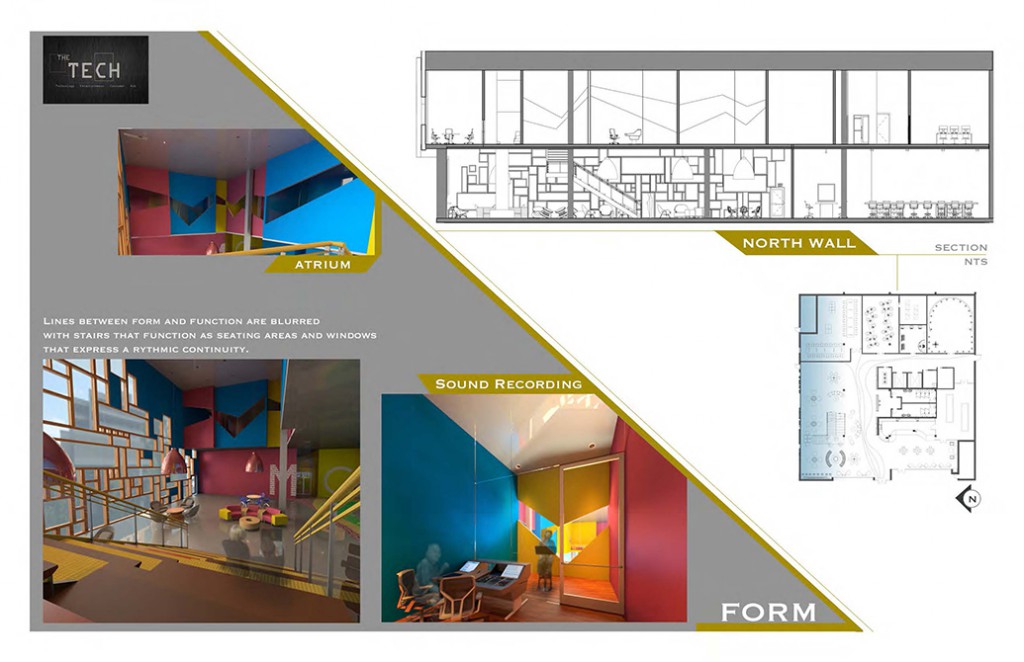 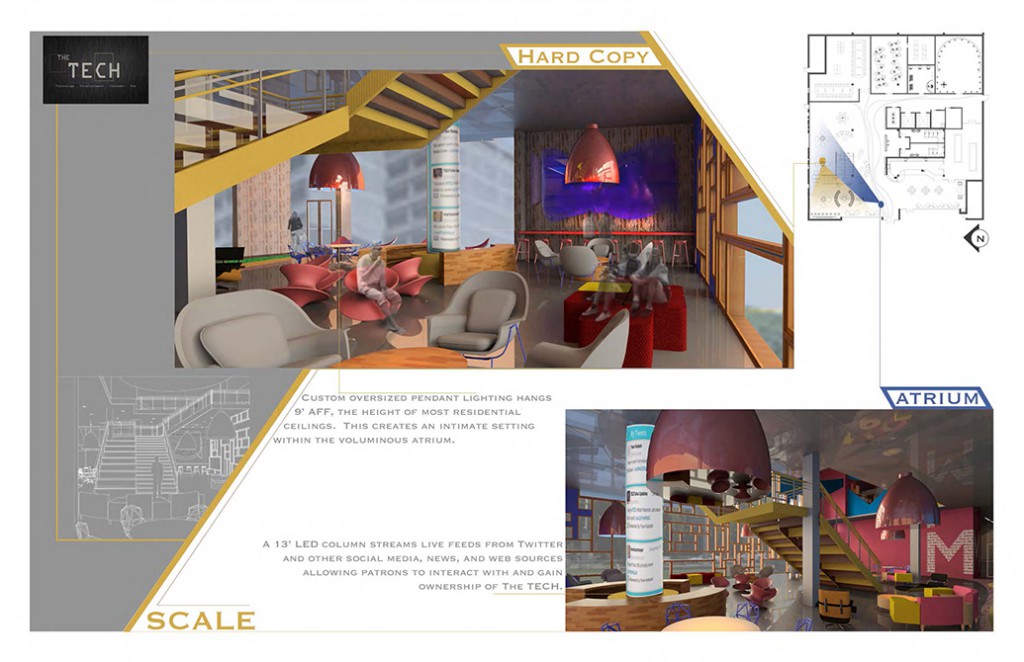 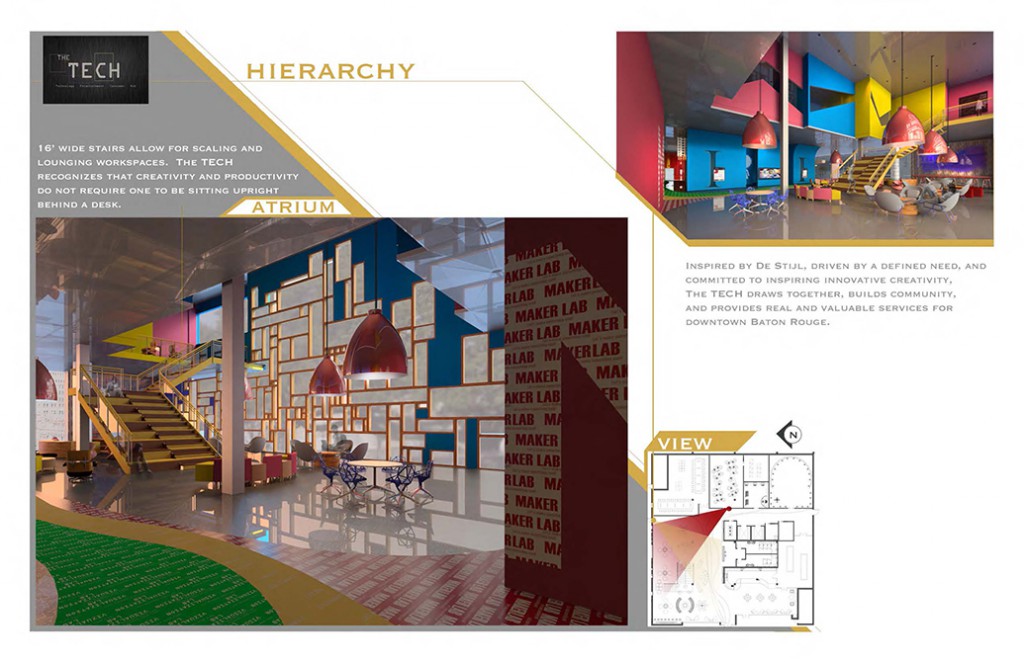 When Tracy made the decision to return to school, she set three main goals for her academic pursuits: 1) earn enough scholarships to pay for her senior year; 2) win the Gensler Brinkmann Scholarship (the winners and finalists are considered for paid internships at Gensler); and 3) intern at Gensler.

To date, Tracy has accomplished two of her three goals—her senior year is completely funded, and she was an intern at Gensler this summer. Although Tracy entered but didn’t win the Gensler Brinkmann Scholarship, it is kind of a funny story. She worked side-by-side this summer with the student who did win the scholarship and who also was an intern at Gensler, Houston. Additionally, the project for a high-tech library that Tracy submitted for the Brinkmann Scholarship was the same project she submitted to win the $30,000 Angelo Donghia Foundation scholarship.

The Angelo Donghia Foundation awards scholarships to deserving students who are entering their senior year in a bachelor’s degree program in interior design. Projects must be submitted by accredited institutions, and Jim Sullivan, chair of the LSU School of Interior Design, nominated Tracy Manuel to participate in the 2014 competition, based on Associate Professor Matt Dunn’s recommendation and her work in his design studio. Tracy—the first LSU student to win this scholarship— was one of 12 winners selected by judges at the New York Design Center on June 24–25. She was awarded a $30,000 scholarship to be applied to her senior year tuition, board, maintenance, and books.

The project Tracy submitted for the Brinkmann—and the winning project for the Donghia scholarship—proposed the transformation of a property located at the corner of St. Ferdinand and North streets in downtown Baton Rouge into a technology facility that would serve as an annex to the River Center Branch of the East Baton Rouge Parish Library.

“Tracy is an outstanding student. She excels in professional preparedness. There is always a completeness and competency in her work that reflect her high level of maturity, particularly for a nascent professional,” Sullivan stated in his recommendation letter to the Donghia Foundation scholarship committee.

Even had Tracy not won the Donghia Foundation scholarship, she was well on her way to having an all-expenses-paid senior year at LSU, thanks to her hard work and proactive pursuit of scholarship and competition opportunities. Tracy’s 2013–14 awards and scholarships include:

When Tracy was offered an 11-week internship at Gensler’s Houston office this summer, she said she didn’t hesitate. “You have to seize these opportunities when they come,” she said. Working out the logistics of how, as a mother of three with a husband who works full time, she was going to manage spending that much time away from her family was a bit tricky, she added. Tracy’s family—her husband and her eldest daughter, in particular—have been amazingly helpful and supportive of her decision to return to school, and they proved just how much they support her during her time away this summer.

During her internship, Tracy met and worked with several LSU College of Art & Design alumni, and she was the acting interior designer on a major project for Danos in Houma, Louisiana. Danos is a strategic partner to oil and gas operators across the globe, offering specialized workforce support to coatings, construction, and fabrication. Gensler, working with MAPP Construction of Baton Rouge as a design-build team, designed a 60,000-square-foot headquarters for Danos that will house 200 employees. The design is the first phase of a multi-building campus that will surround a courtyard and eventually hold more than 500 employees. Danos, a private company, treats the staff like family, and the headquarters includes a great room designed for gathering, eating, and celebration. Tracy worked directly with LSU architecture alumni, Principal Greg LaCour (BArch 1982) and Senior Associate Robert Bradford (BArch 2000), the project manager of the Danos project. Her responsibilities included working with artisans and custom furniture designers, meeting with clients and manufacturers, helping determine lighting and seating, and assisting with the finalization of mechanical and electrical plans for the space.

Tracy was one of 24 interns working at Gensler’s Houston office this summer, and she thrived in the collaborative, open-office atmosphere at the firm. While the interns worked on a variety of individual projects, they also worked together on a project for the Boy Scouts of America. Tracy worked on the Boy Scouts Venturer Camp and gave a presentation to more than 300people at the end of her internship. Alumna Julie Schroeder (BID 1993) was one of the leading interior designers on the Boy Scouts of America project.

Tracy said her internship experience at Gensler reflected the high caliber of teaching she has received at the LSU School of Interior Design. She was in a situation that allowed her to compare herself to other interns hailing from prestigious universities such as Harvard and Princeton, and she realized the amazing amount of information she had absorbed from her professors and instructors at LSU. She received affirmation from Gensler associates, as well, who told her they enjoy working with interior designers from the program at LSU because they know from experience that they are well equipped and know enough to “hit the ground running.”

What’s next for Tracy?

Well, for one, Tracy has accepted a position at Gensler, Houston. On top of fulfilling her responsibilities for her senior year of study in the interior design program, Tracy will be working for Gensler two days a week, continuing her contributions to the project for Danos in Houma. Gensler offered her a full-time position at their Houston office upon graduation, as well. Tracy will graduate, possibly cum laude, with a Bachelor of Interior Design in May 2015. She is excited and willing to move with her family to Houston to pursue the opportunity, and she has almost an entire year to work out the details.

Tracy is already a LEED Green Associate, a certification she obtained after a course taught by Professional-in-Residence Matt Edmonds. After working at Gensler for two years, she plans to sit for the National Council for Interior Design Qualification (NCIDQ) exam to receive licensure as an interior designer in the states of Louisiana and Texas. And, one day—maybe—she dreams of opening her own interior design firm, where she can employ her special-needs daughter and offer her a more fulfilling life.

“It has been a lot of hard work, a lot of missed life. I am exhausted all the time. I’ve had to make sacrifices, but it has all been worth it,” said Tracy.

Tracy may be one of the few students employed prior to graduation, but graduates of the interior design program at LSU have a significantly high employment rate. Of the students that graduated in May 2013, 93 percent were employed by December of the same year. Over the past few years, LSU interior design graduates have gained employment as interior designers, furniture designers, and visual merchandisers, and some have continued into education. The LSU School of Interior Design has alumni working at Perkins+Will in Dallas, Walt Disney World in Orlando, Tillitson Design Associates in New York City, Montgomery Roth in New Orleans, NBBJ Architects in Seattle, and more. Many alumni own their own successful practices and design firms.

Visit interiordesign.lsu.edu for more information about the LSU School of Interior Design and browse interior design alumni profiles at design.lsu.edu/alumni/interior-design.