Henry Bein is a registered architect in Louisiana. Since 2018, he has worked professionally with Kevin Harris Architect, LLC on custom residential, ecclesiastical, and historic preservation projects across Texas, Louisiana and Mississippi. Henry specializes in classical and traditional architecture and currently serves as the Education Committee Chairman for the Louisiana Chapter of the Institute of Classical Architecture & Art.

An LSU School of Architecture graduate, Erin has enjoyed a rich career of work in Houston, Atlanta, and Baton Rouge, which she and her family have called home for the past 14 years.

A skilled architect and project manager, Erin is adept at all phases of design from planning through construction. Erin leads Tipton Associates’ dedicated Dining Studio, where she and the team focus on higher education dining facilities, creating dynamic environments for universities across the country.

Erin enjoys working on her home renovation projects and baking for family and friends. She is actively involved in her church, where she volunteers in the children and sports ministries. Erin decided to become an architect at the age of 10 after visiting the office of a family friend. She remains enamored by the design process and watching ideas become reality. 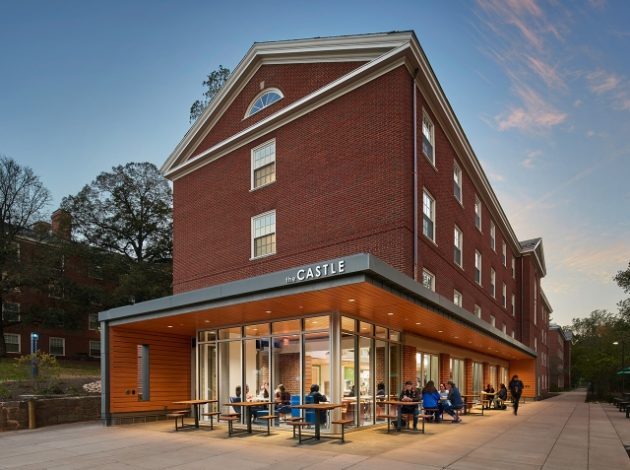 Improved air quality, new social spaces, a plant-forward menu, and a wraparound porch elevate “The Castle” at University of Virginia. Photo by Cameron Triggs. In association with Clark Nexsen.

He specializes in hospital design with a focus on pediatric care. He has designed hospitals in multiple locations in the United States and many international sites.

Tyler received his Bachelor of Architecture in 2015, and began work at Corgan Houston in the education studio the same year. His specialization is in K-12 schools and has had the opportunity to design several schools for ISD’s across the state.

Mark is a native of Baton Rouge and currently lives and practices in Shreveport, LA. Upon graduation from LSU he launched his career in Dallas, TX to work on some large civic projects. Mark relocated to Shreveport, LA in 1992 and has practiced there ever since. The firm has also worked all across the United States. His practice is focused on commercial projects but he has recently enjoyed delving into the residential world. The firm offers architecture, interior design, planning and graphics.

David received his Bachelor of Environmental Design from TAMU in 1994 and worked in construction and architecture until receiving his Bachelor of Architecture from LSU in 1999. He then headed to GSR Andrade Architects in Dallas, Texas where he worked on a multitude of architectural project types. In 2006, David returned to Louisiana and began work at Holly & Smith Architects concentrating on education, commercial and historic preservation project types. He is currently working at Gasaway Bankston Architects in Hammond, Louisiana.

Elyse received her bachelor’s degree in architecture from Louisiana State University in May 2010, and a master’s degree in historic preservation, concentration in preservation design, from Columbia University GSAPP in May of 2012.
She is currently employed as a restoration architect, project manager and studio head at CANY Architecture + Engineering, DPC. She has 6 years of experience in architectural restoration and the preservation of historic structures within the New York area. Areas of proficiency include facade restoration and historic building documentation, as well as architectural conservation, materials evaluation, and structural and material repair. Over the past three years, her work has mainly been focused on exterior façade restoration of historic and landmarked buildings within New York City. As a SRAT-certified rope access technician, she is able to gain access to all areas of a building to perform close-up inspections, with the purpose of identifying and evaluating deteriorated components of the building façade. From there, she can develop a repair scope to address the deficient building conditions before they become hazardous.

The main purpose of her work is to contribute to the overall safety of the city and its pedestrians; however, her true passion lies in the restoration of historic buildings: working to preserve or restore historic structures can include stabilization and structural repair work, rehabilitation of the exterior façade, restoration of architecturally significant features, or reconstruction of defining historic elements of the building. In her career, she has been involved in the restoration of several historically significant buildings in New York City and the surrounding area, such as The City Bank Farmer’s Trust Building (20 Exchange Place), The Plaza Hotel, the former Coty Building (Henri Bendel’s at 714 Fifth Avenue), Snug Harbor Music Hall, the Armor-Stiner Octagon House, the Crown Building (730 Fifth Avenue) and the Flatiron Building.