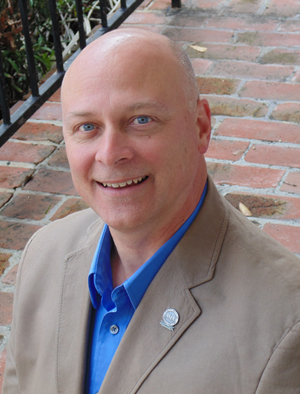 Danos became involved with ASLA while earning his Bachelor of Landscape Architecture at LSU, in large part because of the profound influence of Dr. Robert S. Reich, FASLA. After serving as president of the LSU ASLA student chapter and on the steering committee for LABASH ’89, he served as president of the ASLA Louisiana Chapter from 1996–97. Ever since, he has been a stable advisor to subsequent ASLA Louisiana Chapter presidents, serving as a conduit for knowledge for the future generation of leaders. In 2003, Danos was a key member of the Host Committee for the ASLA Annual Meeting & Expo in New Orleans.

As an advocate for the advancement of landscape architecture, Danos has served on local committees to strengthen landscape and storm-water codes and is currently the landscape architect representative on Louisiana’s licensing board. In this role, he continues to educate and defend landscape architects’ right to practice. As ASLA vice president of government affairs, he was a speaker at state conferences on advocating for the profession at federal, state, and local levels.

“I am honored to have been elected by my peers as the 2014–15 ASLA president-elect and am grateful to all who have supported me through this process. I look forward to presiding over the 2016 ASLA Annual Meeting in New Orleans as it will be a unique opportunity to showcase the great work of the LSU Robert Reich School of Landscape Architecture, its alumni, and the solutions to the challenges we face within Louisiana,” said Danos.

Visit asla.org for more information about the American Society of Landscape Architects.