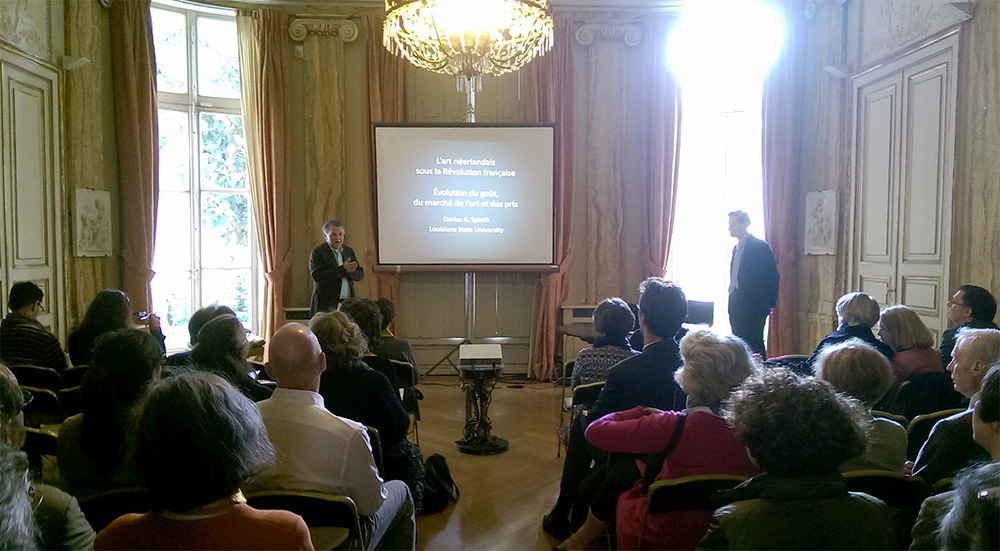 On May 27, 2014, Darius A. Spieth, associate professor of art history at the LSU School of Art, presented his current research at the Fondation Custodia in Paris. His talk, “Netherlandish Art in Revolutionary France: The Evolution of Taste, the Art Market, and Prices” (L’art néerlandais sous la Révolution française: Évolution du goût, du marché de l’art et des prix) was delivered in French before an audience comprised of art historians, museum curators, and the general public. The first part of the lecture retraced how historical events and the behavior of collectors, both royal and private, shaped the 18th-century French passion for Dutch and Flemish pictures of the “Golden Age”—the age of Rembrandt, Rubens, and Vermeer. The second part presented new approaches for how to quantitatively measure the impact of the price shock of the French Revolution on the value of Netherlandish art in the Parisian market place. The lecture concluded with a comparative analysis of the French market for Netherlandish “Golden Age” paintings and prints between roughly 1770 and 1830.

Because numerous aspects of Spieth’s research are based on Frits Lugt’s repertory of historical auction catalogues, established at the beginning of the 20th century, the Fondation Custodia proved to be an ideal setting for the presentation. As Dr. Ger Luijten, the director of the foundation pointed out, “It is wonderful to experience that the reference work of Frits Lugt remains a crucial source for young art historians today. Mr. Spieth demonstrates eloquently how new questions can be formulated thanks to Lugt’s fundamental work.”

Fondation Custodia was established by Frits Lugt. Located in the 18th-century Hôtel Turgot on the rue de Lille, the Fondation Custodia houses one of the most important private drawing collections in the world. Moreover, it is one of the major research institutions in its field in Paris, since it is home to one of the three largest Parisian research libraries in art history, which attracts scholars from all over the world. For more information, visit fondationcustodia.fr.