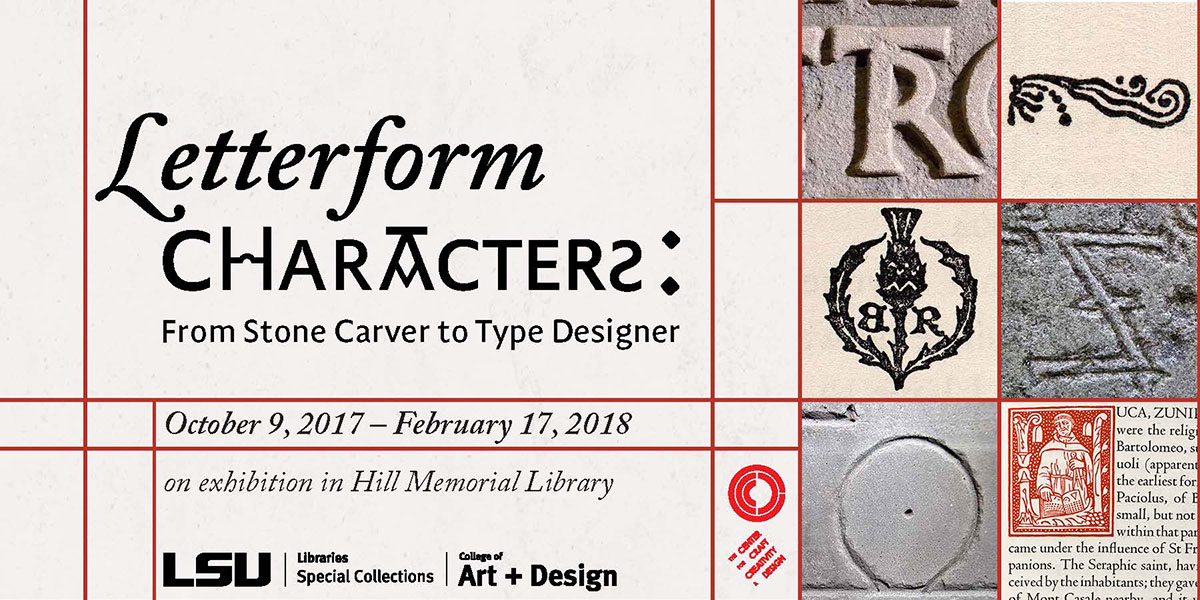 Letterform Characters: From Stone Carver to Type Designer, a collaboration of LSU Libraries Special Collections and LSU School of Art Professor Lynne Baggett, will be on exhibition in the main gallery of Hill Memorial Library, October 9, 2017 – February 24, 2018.

Presented by LSU Libraries Special Collections and the LSU School of Art, the exhibition features two distinct perspectives on typeface history and design.

Through her research of incised letterforms on gravestones from the British Isles and colonial New England, LSU Professor Lynne Baggett presents a challenging assessment of the relationship between influential crosscurrents of craft, technology, and design over the course of nearly five centuries. Exhibiting her own photographs of carved gravestone lettering alongside selected printed works from LSU Libraries Special Collections, Baggett compares the unique visual and aesthetic characteristics of incised letterforms with those typographic conventions found in printed material of the period. Her innovative approach provides cultural and historical context, laying the groundwork for a sustained discussion on the derivation of the incised letterform and the recognition of its significance within the broader realm of typography. This portion of the exhibition is on display in the first floor gallery of Hill Memorial Library.

Selections from the LSU Libraries’ extensive Bruce Rogers Collection are on display in the second floor gallery. American master book designer Bruce Rogers is considered the preeminent typographer of the 20th century; Centaur is the best known of his typeface designs. According to the Oxford Companion to the Book, Rogers’ unique style is defined through “his fastidious yet inventive classicism, his relentless perfectionism, and his superlative use of type ornaments.” Art historians and rare book experts name the Oxford Lectern Bible (1935) his finest work. This volume, along with an account of its printing, are on exhibition among many other exemplary works Rogers designed and printed over the span of his career.

In association with the Letterform Characters exhibition and the LSU School of Art 2017–18 season of lectures and exhibitions, “Character Witnesses,” internationally renowned British type designer Matthew Carter visited the LSU campus to present a lecture on Bruce Rogers’ Centaur type. A 2005 New Yorker profile described him as “the most widely read man in the world,” considering the amount of text set in his commonly used fonts. His four-decade-long career has bridged physical type, phototypesetting, and digital font design, as well as the design of custom lettering. Carter was the recipient of a 2010 MacArthur Fellowship award. His most used fonts are the classic web fonts Verdana and Georgia and the Windows interface font Tahoma; others include Bell Centennial, Miller, Galliard, and Snell Roundhand.

Carter will speak at the LSU School of Art at 5 p.m. on Wednesday, November 15, in the LSU Design Building Auditorium (room 103). A reception will follow at Hill Memorial Library from 6:30 p.m. – 8:30 p.m. The exhibition, lecture, and reception on November 15, 2017, 6:30–8:30 p.m., are free and open to the public. Research for this exhibition was supported in part by a Craft Research Grant from the Center for Craft, Creativity & Design.