Lecture by Marc Fumaroli: “What Language to Say ‘the Arts’? French Rhetoric and German Aesthetics in the 18th Century”
LSU Union Theatre | Monday, November 4, 2013, at 5 p.m. 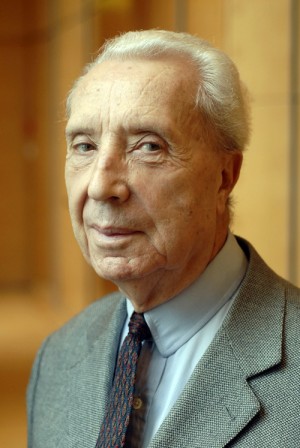 Marc Fumaroli, one of the preeminent intellectual historians of our time, will present a lecture at the LSU Union Theatre at 5 p.m. on Monday, November 4, as part of the 2013–14 LSU College of Art + Design Lecture Series.

Following the lecture, a reception will be held at Hill Memorial Library from 6:30 to 8 p.m. The reception coincides with the opening of La Langue mondiale: French as the Language of Art and Thought, 1750–1900, an exhibition curated by Hill Memorial librarians, Associate Professor Darius Spieth, and students in Spieth’s seminar, Artistic Life in Paris in 19th-Century French Literature. The lecture and reception are free and open to the public.

“Professor Fumaroli is a scholar whose erudition and uniquely poetic rhythm of language are unparalleled. His research makes classical antiquity or the age of Louis XIV—after whom Louisiana was named—come to life to address some of the existential questions facing the visual arts today. Listening to him makes one realize what he meant by saying that words can be finds of luxury,” said Spieth, who teaches art history in the LSU School of Art.

Fumaroli comes to LSU through the College of Art + Design Paula G. Manship Endowed Lecture Series, in partnership with the LSU Departments of French and History, the Comparative Literature Program, the French Ministry of Foreign Affairs in Paris, and the French Consulate in New Orleans.

In his LSU lecture “What Language to Say ‘the Arts’? French Rhetoric and German Aesthetics in the 18th Century,” Professor Fumaroli will share his thoughts on a number of fundamental problems concerning the relationship between words and images, especially the perceived gap between artistic practice and philosophical theory. Rather than reducing the “conceptual turn” in contemporary art to the early 20th century and Marcel Duchamp, he traces its roots to the advent of German aesthetics in the 18th century. Opposed to the dictates and rationalist rigidity of aesthetics, he advances the French poetical and rhetorical tradition as a potent alternative for understanding and interpreting art. The guiding idea behind his talk will be a saying by the Roman first-century BC poet Horace: ut pictura poesis (as is painting, so is poetry).

Marc Fumaroli is a historian of early modern European history, culture, language, and art. He is professor emeritus at the Collège de France, where he was elected in 1986 as chair of Rhetoric and Society in Europe (16th to 17th century). In 1995, he was elected one of only 40 members—or immortels—of the Académie française, the preeminent learned body on matters pertaining to the French language, established by Cardinal Richelieu in 1635. Fumaroli taught at the Sorbonne in Paris and was professor at large at the University of Chicago between 1997 and 2006.

Among his many academic affiliations, Fumaroli is president of the Société d’histoire littéraire de la France; a member of the Académie des inscriptions et belles-lettres (the sister academy of the Académie française, devoted to high erudition); and a foreign member of the British Academy, the American Academy of Arts and Sciences, and the American Philosophical Society.

Fumaroli’s numerous awards include the Prix Monseigneur Marcel (1982) and the Prix de la Critique (1992), both awarded by the Académie française prior to his elected membership in 1995, and the prestigious International Balzan Prize (2001), known as the “Nobel” of the humanities.

Fumaroli is the leading authority on 17th-century rhetoric and is largely responsible for the position this discipline currently enjoys in contemporary thought and practice. L’ Âge de l’éloquence (1980/1994) is among his most influential and pioneering publications in the field of cultural history. Perhaps his best-know work in the United States is his book, When the World Spoke French, published in English by the New York Review of Books in 2011 and translated by Pulitzer Prize–winning poet Richard Howard. Conceived as “a portrait gallery of foreigners conquered by Enlightenment France,” When the World Spoke French provides biographical essays about a diverse and fascinating cast of characters. Fumaroli is currently writing a book on 18th-century French art, as related to the momentous figure of the comte de Caylus.

Fumaroli will be in Baton Rouge November 2–6 and in New Orleans November 7, where he will make an appearance at the Alliance française, organized through the French Consulate in New Orleans, and meet with the French consul and Dalt Wonk, author of French Quarter Fables. Other than lecturing while in Baton Rouge, Fumaroli will meet with students enrolled in “Introduction to Art,” LSU Honors College students enrolled in the class “Art and the French Revolution,” and students and faculty in the School of Art, Departments of French and History, Comparative Literature, and English. A visit to Lafayette is also planned.

“The consulate welcomes the visit of Professor Marc Fumaroli, and we are grateful to LSU for setting up, with our support, an excellent program. As a member of the Académie française, his visit to Louisiana makes particular sense at a time when the French language experiences a new momentum. Cultural connections between Louisiana and France have deep roots. We are excited about these events at LSU and in New Orleans,” said Jean-Claude Brunet, consul general of France in New Orleans.

For more information about the LSU College of Art + Design Lecture Series and to view a complete 2013–14 lecture series schedule, visit design.lsu.edu.