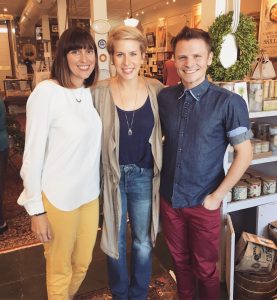 New Orleans-based interior designer Amanda Connolly (BID ’00) always enjoyed home design shows. So when she had the opportunity to work for Home & Garden Television (HGTV)’s program Home Town, she jumped at the chance to showcase her skills on television.

Amanda is a design producer for the home renovation television program. More than 16 million viewers watched the first season of Home Town in 2017, reflecting the rising popularity of home design programming. The debut episode attracted 2.2 million viewers, the second-highest number in HGTV’s 23-year history. The show has been featured in Southern Living Magazine, Country Living, Los Angeles Times, The Washington Post, and “The Today Show.” Season 2 premiered in January 2018.

HGTV’s Home Town is set in Laurel, Mississippi, featuring home renovation projects around the southern town. Cohost couple Ben and Erin Napier use creative solutions to re-design historic houses into new homes for incoming inhabitants; they aim to restore homes in a way that honors their history while creating spaces that reflect the personal tastes of the new owners. Following the format of other popular “house flipping” television shows, each episode introduces different couples searching for a home in the area. The “big reveal” moment showcases the renovated rooms complete with new interior design, fully furnished and decorated.

“Home Town has been a special opportunity to fully conceive and realize a design down to the tiniest details of the table linens and silverware,” Amanda said. 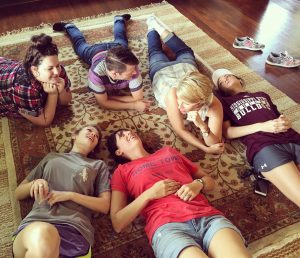 Amanda is lead interior designer of Shotgun Design Group, and New Orleans district chair of the American Society of Interior Designers (ASID). She had no prior television experience when she came upon the opportunity to work for HGTV. Amanda and her business partner Blake Erskin received a tip from a fellow New Orleans ASID member who had received notice that there was a new HGTV series production team looking for an interior designer/production designer.

“After researching Erin’s style and the pilot episode, which months prior I had seen and loved, we knew we could work with her aesthetic,” Amanda said, referring to Erin Napier, show co-star. “We met with Erin and Ben in a face-to-face interview, and were impressed with the direction of the show. They were willing to take a chance on two interior designers without any television experience.”

“They were willing to take a chance on two interior designers without any television experience.”

Amanda and Blake appear in the second episode of Season 1, helping Erin to set up the rooms in a newly renovated home. As a design producer, Amanda collaborates with Erin and the rest of the design team to make interior design choices for the houses featured on the show. She helps select furniture, fixtures, and equipment, assists with space planning and “dresses” the houses for reveals. The interior design team supports the stars in the design process for all houses featured on the show. 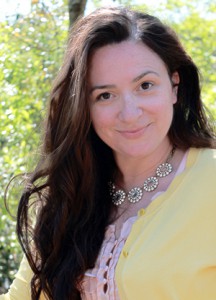 Fellow LSU alumna Tracy Manuel (BID ’15) was a design associate for Season 2 of the hit show. Tracy is principal and lead interior designer of T3M Studios in Florence, South Carolina. She joined the show when the production company RTR Media reached out to the LSU School of Interior Design looking for designers. Within a week Tracy had a phone interview and 24 hours later she was hired and bound for Laurel, Mississippi for the next six months.

Marsha Cuddeback, director of the LSU School of Interior Design, said she was contacted by RTR Media in June 2017 when they were searching for a recent graduate to be a design associate for the HGTV show. “When I received this inquiry I immediately knew who to contact: Tracy Manuel,” she said. “Our school prepares students to enter the profession of interior design, but they also emerge with diverse skills and interests applicable to a variety of career paths. Tracy is just one example of our highly adaptable and accomplished students.”

Tracy was not a “traditional” student when she studied interior design at LSU; she decided to pursue the degree after 16 years at home focusing on her three children. She received numerous scholarships and awards to support her tuition, including interior design scholarship competitions. After graduating she had an offer from Gensler, architecture, design, planning and consulting firm, in Houston. She went on to found her own interior design firm in 2017. Still, when she received the offer to join the show’s design team, she jumped at the opportunity.

The experience on Home Town has been unlike any other Amanda and Tracy have had as interior designers. It was a challenge at times to pull things together under tough time constraints and tight budgets, and with cameras in the mix. Season 1 was a baptism by fire, Amanda said. “With an amazing production and design team we pulled it off to complete ten houses within six months. Season 2 made for an even greater challenge of ten houses within four and a half months!” 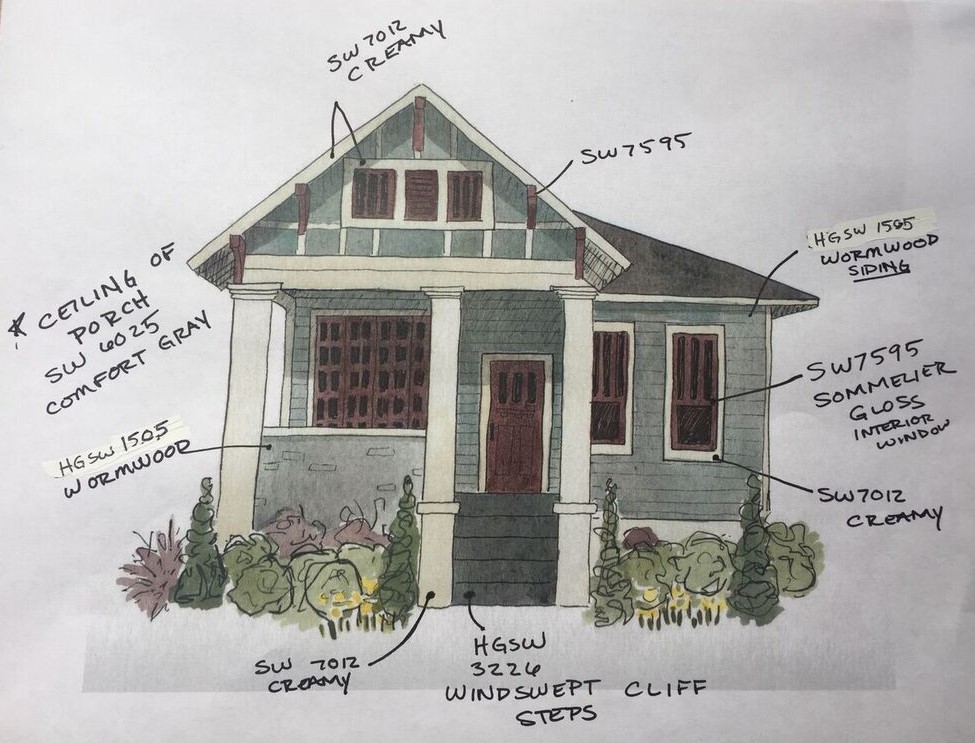 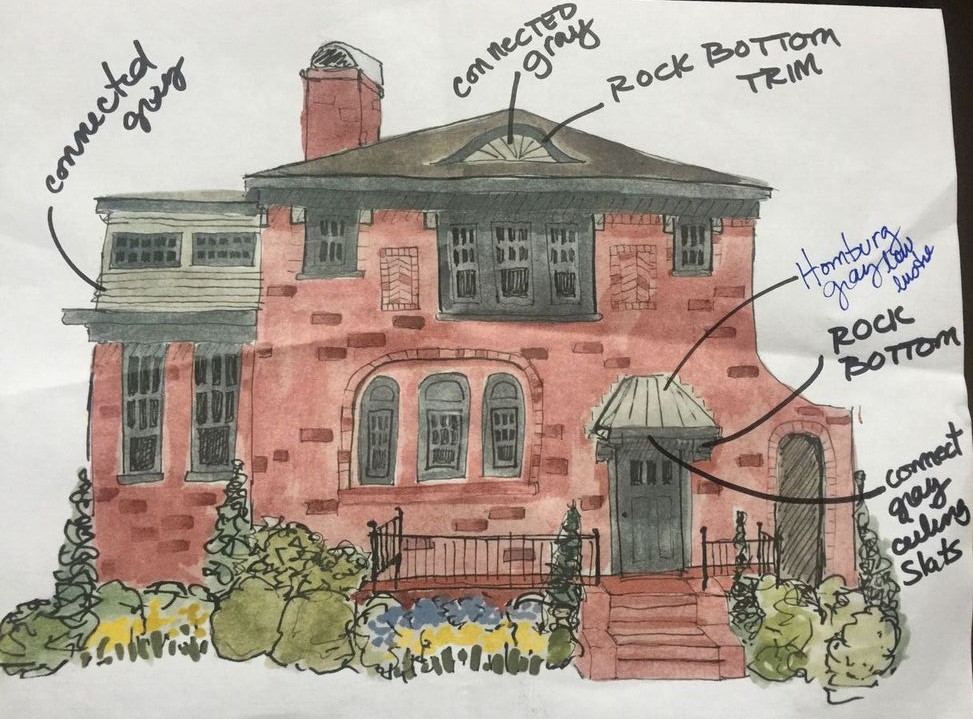 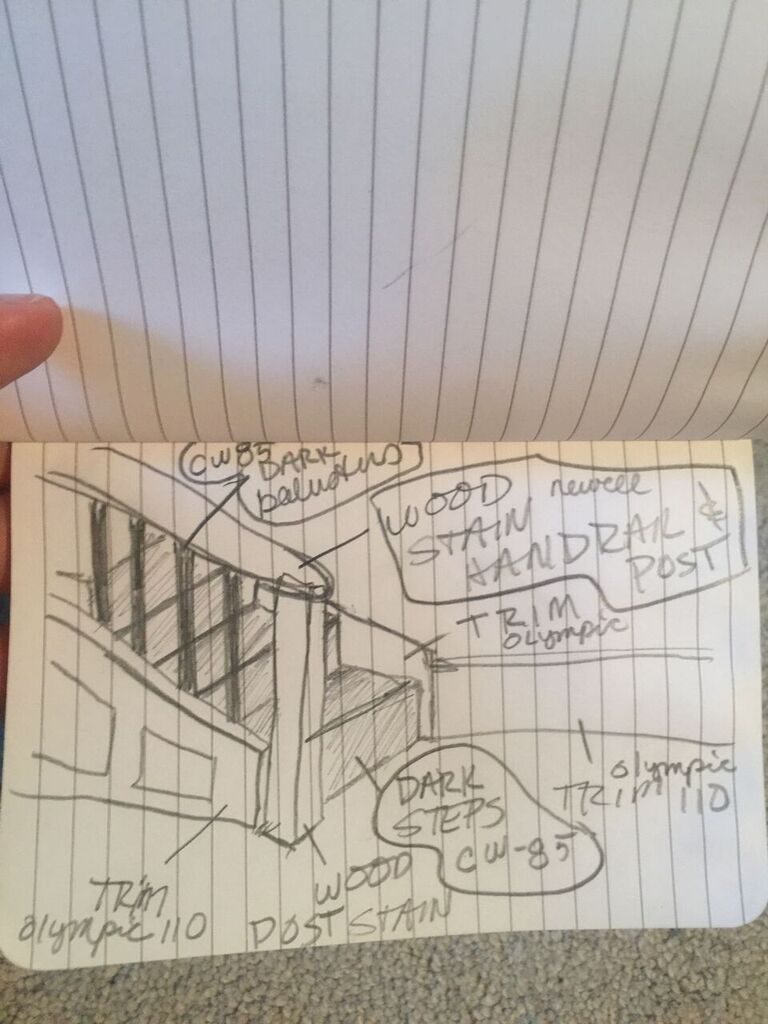 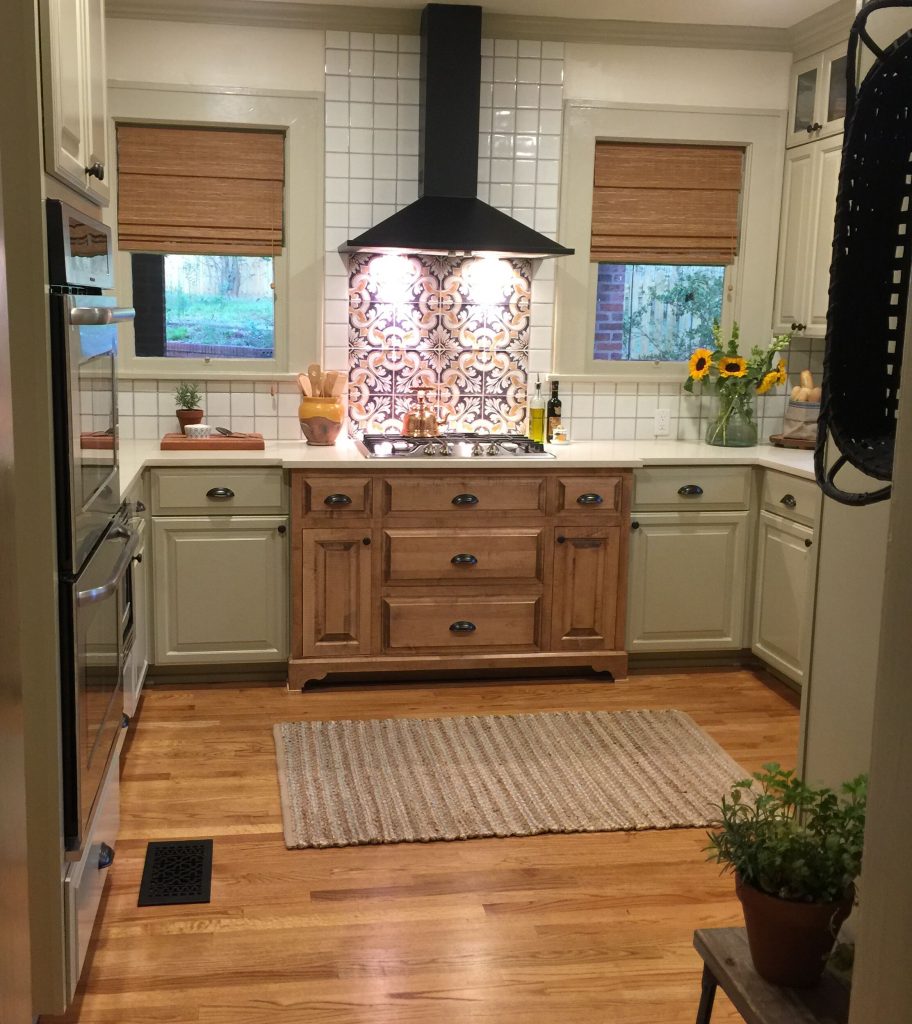 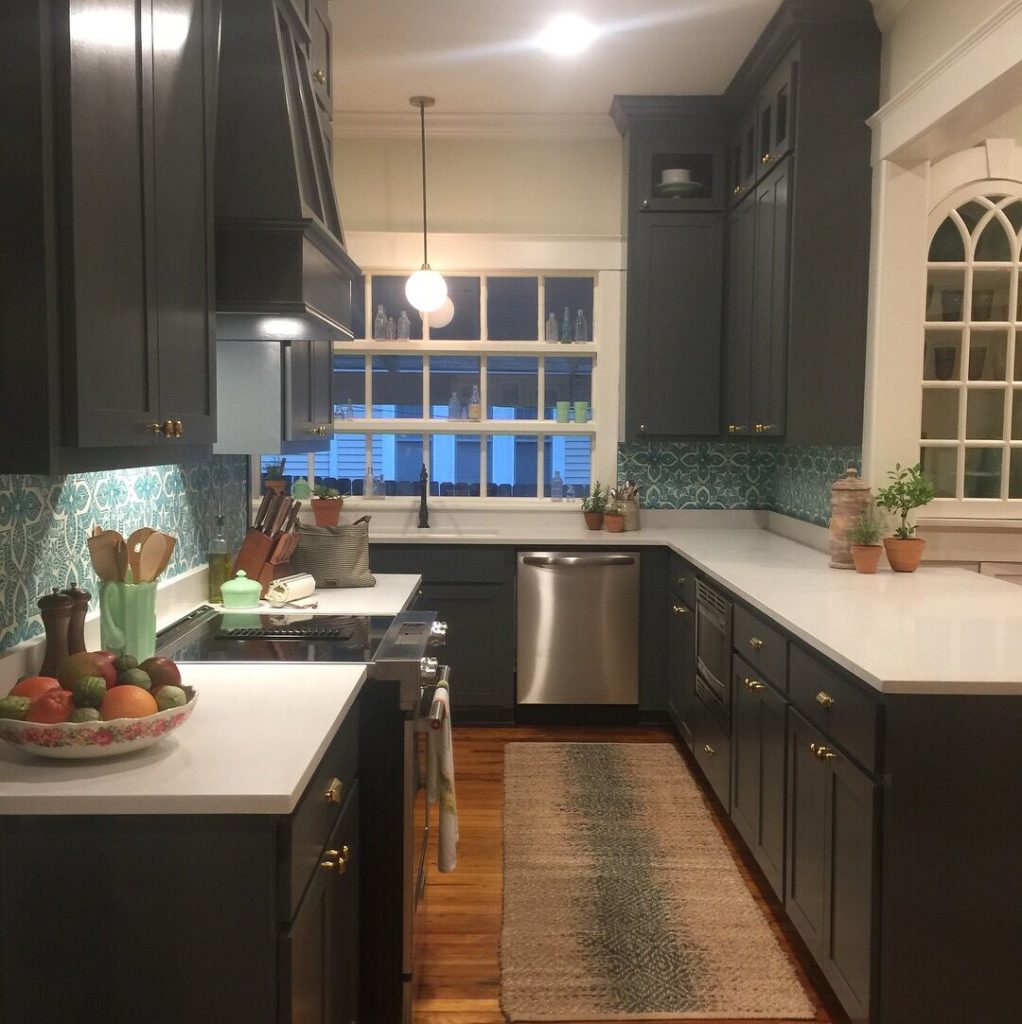 Tracy agreed it was an incredible challenge. “Working on a television show is like juggling a design for a board of directors,” she said. “There are lots of people to please, never a [clear] budget, and never enough time. It’s the perfect storm to learn exactly what you’re capable of doing under pressure.” 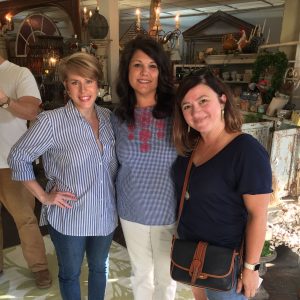 As a design associate, Tracy was the “boots on the ground” during the construction phase. She was responsible for making sure all designs were correctly implemented on site, along with managing finish schedules and design budgets. “We did everything – project management, sketching designs on sheet rock, cleaning, staging, purchasing items – you really do everything,” she said.

Since they had as many as five houses undergoing renovation at a time, the interior design team always had to multitask. But they enjoyed being part of the design reveal team that aided in the staging of the houses prior to reveals. With each episode, new spaces and homeowners led to different challenges, and the designers had to adapt to each scenario. 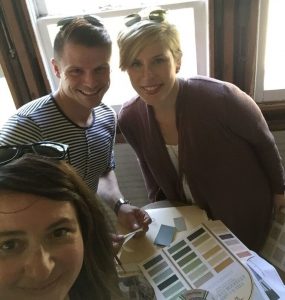 Being on the other side of the screen was an enlightening experience for the interior designers. They witnessed off-screen processes, saw the renovation projects’ development in real time, and learned how to design for television. On Home Town, woodworker Ben builds furnishings for the individual spaces, often using wood salvaged from the construction process. The show’s interior designers also incorporate the homeowners’ personal items and furnishings into the newly designed spaces wherever they can, to reflect their real life needs and personal styles.

“The beautiful part of it all was that we were able to pull it off,” Amanda said. “Each time we revealed a house to homeowners and they were emotionally moved because the home was a true representation of them, we knew we had done our jobs. For me the thrill of interior design is watching a project that begins in concept be brought to life.”

For the full article, see the Quad Magazine 2018 summer issue.