Ryan’s “Art & Environment” seminar covers the history, theory, and analysis of participatory art—commonly known as social practice art—with a focus on climate and environmental issues, especially in Louisiana. The class teamed up with the Louisiana Environmental Action Network (LEAN), a statewide organization based in Baton Rouge that, since 1986, has worked with special communities suffering from the effects of climate change, commercial pollution, and other environmental issues. After reading texts on the history and theory of environmental issues and theories of social practice art, Ryan’s students worked in groups to execute their own social interactions in Louisiana communities. The students then wrote papers on their work within the context of the historical and theoretical literature. 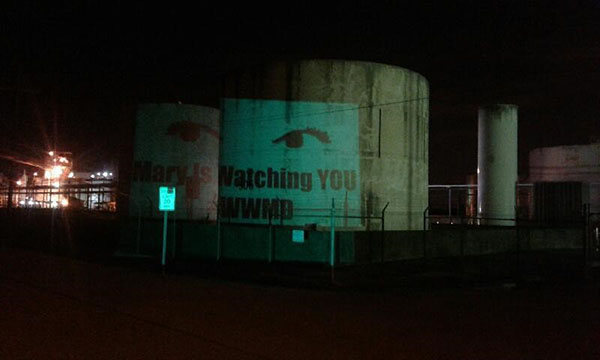 “Mary Is Watching You” projected on Exxon tanks near Alsen, Louisiana (Photo by Erin Rolfs)

One group focused on Alsen, a small, unincorporated town founded by freed slaves in the 19th century. As noted by environmental researchers like law professor Oliver Houck and geographer Dr. Craig Colten, this community has been repeatedly targeted by waste and petrochemical companies to bare a disproportionate and unsafe exposure to toxic byproducts in their water, soil, and air. In the 1980s, resident Mary McCastle took one waste corporation, ironically named Rollins Environmental Services, to court and won. However, Rollins was not the only dumper, and, after the extreme flooding of Baton Rouge and surrounding areas in summer 2016, debris from flooded streets and properties was hauled to a dumping site near residents’ homes in Alsen—without proper sorting or screening for toxic fumes. Chemicals from the landfill leach into the groundwater, and the local Department of Environmental Quality (DEQ) bypasses the small city.

For their participatory art project, Erin Rolfs (MA in Art History candidate), Hannah Sonnier (BFA in Studio Arts candidate), and Kristian Carroll (BA candidate) used social engagement and creative action to shed light on Louisiana’s environmental concerns. The group invoked the presence of local hero and late activist Mary McCastle (1929-2000) in a “projection bomb” featuring Mary’s watching eyes and the bold phrase, “Mary Is Watching You.” They projected the image around the community on roadside objects, such as trees and oil tanks, and on key government buildings in Baton Rouge, including the DEQ headquarters and the Baton Rouge capitol building.

“Projection bombing is a peaceful yet forceful way to get a message across by increasing visibility, breaking through gated/protected spaces without trespassing, and making the site of contention the canvas for your cause,” states the group on the website they created, maryiswatching.squarespace.com. They also created a social media campaign at facebook.com/MaryIsWatchingYou and the hashtag #WWMD (What Would Mary Do?). 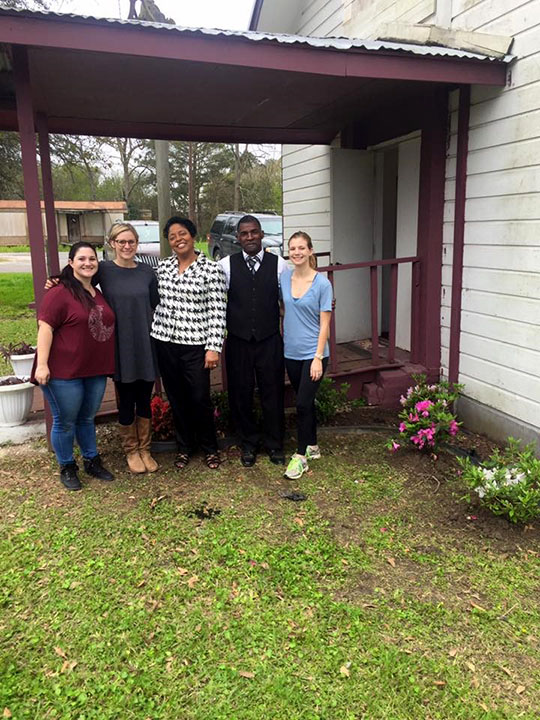 One group teamed up with a local minister to distribute toxin-absorbing plants to community members.

Another group executed actions to raise awareness of environmental hazards and social issues in the St. James and Adriana communities. Caroline Geipert (MA in Art History candidate), Adriana Goethel (PhD in Theater candidate), and Molly Johnson (Bachelor of Architecture candidate) banded together to raise awareness in St. James (also originally a freed slave village), a community adversely affected by methanol emissions from Chinese-owned Yuhuang chemical plant and other pollutant-producing industries in the area. The group used the crowdsourcing site GoFundMe to raise money to buy plants and flowers known to absorb airborne toxins—not so much as a solution but as a symbol of hopeful community action. They teamed up with a local minister to distribute the toxin-absorbing flora and helped community members plant them around the church while discussing how the plants work and how the intervention exemplifies greater awareness of the hazardous air quality. They also launched a Facebook group to help combat methanol emissions and air pollution in St. James. 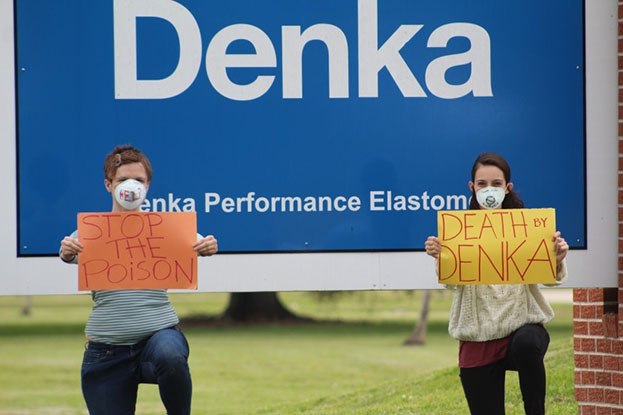 Visit art.lsu.edu to read more about art history at LSU.