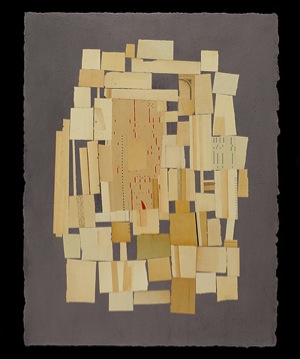 Baton Rouge, LA: Mixed-Media Artist and Poet Jacqueline Dee Parker, an instructor in the College of Art & Design, will have a solo show, “Dream Houses,” at the Diane Birdsall Gallery, 16 Lyme Street, Old Lyme, CT, June 23-July 21, 2012. The opening is June 23, 6-8 p.m. and the artist will be present.

Gallery Owner Diane Birdsall, says Parker’s work “cross-pollinates the artist /painter and poet psyche.” She adds, “The work on paper in this show is two dimensional with a topographic surface made up of collected  ephemera, paper, canvas, music, and cloth book spines. The abstract designs of cut paper, mostly buff color, is composed of circular and rectangular shapes arranged in a manner suggesting architectural structure.”

Early life in the home of an architect and a violinist, Parker says, clearly influenced her aesthetic.  “Exposure to the art of architecture encouraged my interest in spatial relationships, taught me to read elevations and visualize their 3-D intentions, and, at construction sites, to appreciate the evolution of concept to form,” she says.

Parker says she is attracted to the tactile quality of mixed media not only because it makes visible the labor of revision that the writing process tends to hide, but also because it embodies the movement of perception and discovery. “At the end of the day –or night –my paintings and poems rely on juxtaposition, metaphor, and the process of association, among other things, to express some sense of order, humanity, and emotional intent,” she says.

In 2009, Parker was awarded a juror’s prize in the 2009 Rauschenberg Tribute Exhibition (Museum of the Gulf Coast). Her poems appear in many literary journals and anthologies, including Atlanta Review, The Southern Review, Chelsea, and American Diaspora: Poetry of Exile, among others, and her work has been nominated for a Pushcart Prize. She is the recipient of a 2007 Artist Fellowship from the Louisiana State Division of the Arts.